Most of the publicity around BBC America this week has been the build-up to the 50th anniversary special of "Doctor Who," one of the most popular shows in the world. To make sure audiences enjoy it simultaneously on both sides of the pond, "The Day of the Doctor" will air around the world at 2:50pm EST. Set your DVRs carefully. As the buzz about a show that has shown remarkable staying power lingers throughout the day, BBC America will re-broadcast the highly-anticipated special as a super-powered lead-in to their latest attempt at genre TV domination later that night: "Atlantis," a fantasy series from the creators of "Misfits" and "Merlin." Paired with the often-brilliant "Who," "Atlantis" is almost certain to disappoint, coming off more like an old-fashioned Saturday afternoon syndicated series like "Xena: Warrior Princess" or "Hercules" than what one would expect from a network like BBC America. With clunky dialogue, miserable production values, and inconsistent plotting, "Atlantis" is unlikely to spin the narrative in any way that pulls from the "Who" mythology. If anything, it's most likely to simply raise the profile of "Who" in comparison. 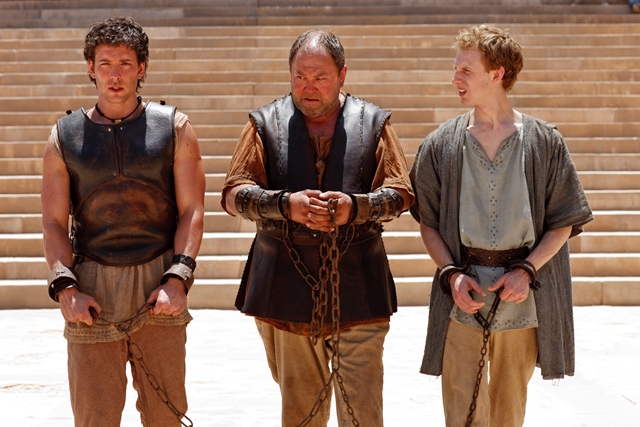 The handsome Jason (Jack Donnelly) sets out to find his seafaring father, sees a bright light, and wakes up naked on the shores of the legendary city of Atlantis. Just one of those days. Without much in the way of shock (and it's truly remarkable how little the creators of this show actually use their conceit of a time traveler in a new world), he meanders into the ancient Greek city in front of him, where he just happens to bump into a gawky Pythagoras (Robert Emms) and burly Hercules (Mark Addy). Yes, "Atlantis" is one of those shows that throws a variety of mythological characters into a Cuisinart and hits puree. There's Hercules, Pythagoras, Ariadne (Aiysha Hart), Medusa (Jemima Rooper), and encounters with the Minotaur and Dionysian witches over the first two episodes. It's a cluttered mish-mosh of references designed to feel familiar to viewers (the writers presume that if they call Addy's drunken oaf Hercules, they've already done some character development purely by what audiences connect with that name) but it hints at a lazy, uninspired creative process—the downfall of so many mediocre series.

Of course, Jason's arrival in Atlantis is part of a grand prophecy, something known only to the Oracle (Juliet Stevenson). She knows that he was fated to land on the shores of Atlantis and it is his destiny to save Ariadne and protect the innocents of the city from its treacherous power structure, including Queen Pasiphae (Sarah Parish). Jason jumps quickly into this world of dragons and Minotaurs, looking like he belongs relatively quickly. He partners with a bit of brawn in Hercules and a bit of brain in Pythagoras and the adventures begin. The writers toss in a reference to Jason being from the present-day world but very rarely take advantage of the concept, almost as if it was a tacked-on afterthought in the pre-production process. By the second episode, "Atlantis" feels more like "Spartacus" than a piece about time travel or someone who journeys to a fantasy world. 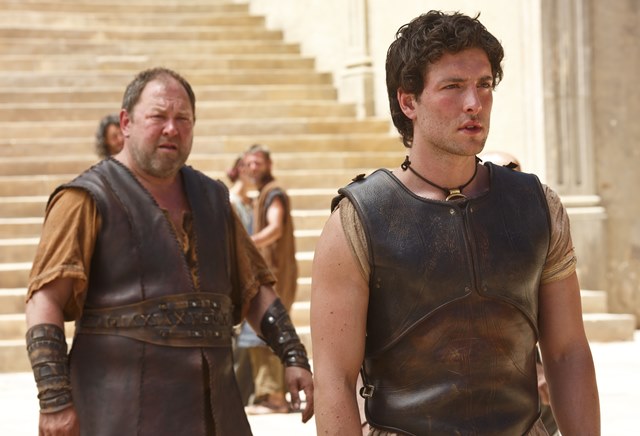 However, "Atlantis" doesn't have nearly the production value of Starz's variation on the legend of "Spartacus." Especially when contrasted with the high production values of "Doctor Who," "Atlantis" looks stunningly cheap. The art direction is almost non-existent, the costumes look like second thoughts, and even elements like the overheated score feel beneath modern, primetime television. We've become accustomed to very high, Hollywood-caliber production values on television in this new era and arguable golden age and "Atlantis" doesn't look like it belongs.

That "old-fashioned" sense of production could have worked if the creators of "Atlantis" had embraced it. ABC's "Once Upon a Time," as silly as it can be, highlights its narrative ridiculousness through over-the-top melodrama, coming off like the creators know it should be a guilty pleasure and so it is for many people. "Atlantis" too often plays it straight—trying to appeal to that demo that wishes there were more action-adventure shows like "Xena" still on the air instead of making an effort to appeal to modern TV viewers. And yet it's not even as fun as that might make it sound. If it felt like the writers and producers knew that a drunken Hercules rooming with a nerdy Pythagoras in the city of Atlantis was inherently silly and, consequently, pitched the show as a B-movie bit of escapism, then "Atlantis" might have had value. But the show is remarkably dull in terms of character, performance, and plotting. To be fair, Addy and Stevenson are the veterans who give this paper-thin show as much depth as they can but they can't save "Atlantis". (And Addy's appearance will likely just remind people they'd rather be watching the best fantasy show on TV, "Game of Thrones.") Ultimately, it's not a program that's abrasively bad or annoying, just forgettable. And with so many options in today's TV market, that's the worst thing a show can be.