An Emotional Journey: "Jackie" Gets a Special Screening in Washington, D.C.

First Lady Jacqueline Kennedy returned to Washington, D.C., on Thursday night, thanks to the magic of the movies. Bigwigs—both the Hollywood kind as well as those who hail from politics, journalism and the military—came out for a premiere of the expected awards contender that features Natalie Portman in the lead role. Many probably turned out just for the chance to see the 2010 Best Actress Oscar winner for “Black Swan,” unmistakably pregnant with her second child as she dutifully worked the press line and posed for photos at the Newseum.

“Jackie” is a revealing intimate portrait of how JFK’s widow coped with grief—both hers and the country’s—in the immediate aftermath of her husband’s assassination on Nov. 22, 1963. When I had seen the film at an earlier showing before the recent presidential election, the events shown onscreen re-awakened memories of not being much older than 35th president’s daughter Caroline and son John Jr. as I observed their reactions beside their mother during this tragic period. Like everyone else, my family was fixated on the news coverage on the Big Three TV networks, especially the solemn funeral procession through the streets of the Nation’s Capital. The big-screen re-enactment, shot on location last winter, brought back that sense of heavy sadness and loss of innocence that I felt as a kid.

But watching the same movie post-election a little more than a mile away from where President Obama and his family were lighting the White House holiday tree on the Ellipse for the eighth and final time, the film stirred a different type of unsettled feeling, one that often accompanies great change and facing the unknown.

The screening sponsored by Fox Searchlight and its parent company, 21st Century Fox, along with the Motion Picture Association of America attracted a packed bi-partisan audience including former Attorney General Eric Holder, Ambassador Peter Selfridge and senators Shelley Moore Capito, a Republican from West Virginia, and Chris Murphy, a Democrat from Connecticut. Eleven members of the House of Representatives also were in the auditorium alongside such notable journalists as Maureen Dowd, Sally Quinn, Nina Totenberg and Howard Fineman.

In his intro, Rick Lane—senior VP of government affairs for 21st Century Fox—saluted the late Jack Valenti, who was a special assistant to JFK’s successor, Lyndon Johnson, describing him as a close friend and mentor when he later became head of the MPAA from 1966 to 2004. As played by “Jackie” actor Max Casella, who was in attendance, Valenti comes off as an aggressive LBJ loyalist and not entirely likable as he butts heads with Bobby Kennedy (Peter Sarsgaard) and, to a lesser extent, the now-former First Lady over when the itching-to-take-charge newly sworn-in president could occupy the Oval Office.

In fact, the biggest laugh during the screening came when Bobby tells everyone in a room to sit down after a panic erupts when JFK’s accused shooter, Lee Harvey Oswald, is shown being gunned down on TV. President Johnson glares at Kennedy’s brother, scowls and says, “Excuse me?” But Bobby simply repeats his command and Lady Bird Johnson encourages her husband to do as he is told. For most of the running time, however, the crowd was reverently silent—save for their audible surprise and amusement when an implacable Jackie takes charge of a magazine interview and decides the direction it will take.

Most of the audience stayed for the Q & A session with Portman, director Pablo Larraín and screenwriter and former “Today” show producer Noah Oppenheim conducted by Washington Post columnist Ruth Marcus—if only for cellphone photo ops. 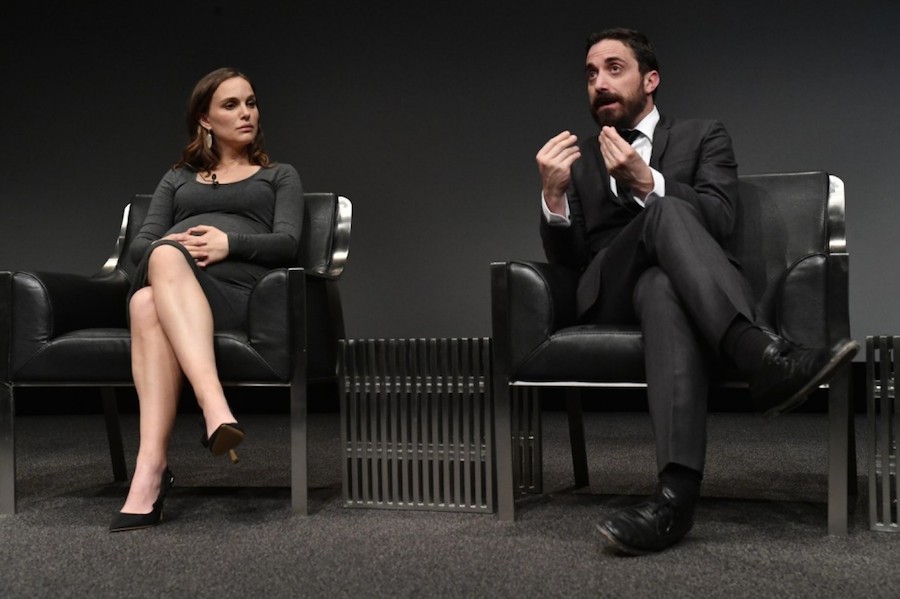 Portman, whose arrival onstage post-screening was greeted with a chorus of loud cheers and hearty applause, discussed the difficulties in bringing to life an iconic figure that had such a distinctive look and voice. “The biggest challenge was playing a character that people know so well. Of course, you have a threshold of believability that you have to achieve before people will go with you on an emotional journey. To look great, to sound great, it takes a lot of work."

When Marcus noted that the actress had a lot of voice coaching and that “there was a lot of eyebrow work,” Portman laughed and said, “Pablo was always telling me not to use my eyebrows quite so much. He was always like, ‘Calm down with the eyebrows.’"

As for what surprises she discovered about Jackie, “The biggest shock for me was from Noah’s script, which was obviously well-researched. This idea that she had really crafted the myth of this Camelot”—inspired by JFK’s love of the Broadway musical based on King Arthur that was popular during his time in office.

As a native of Chile, Larraín says he didn’t grow up knowing the Kennedy myth. “It wasn’t in history books. It was on TV. What you knew about the Kennedys is from pop culture. I had a very superficial idea about Jackie Kennedy before this movie. I thought she was just this fashion icon. And I had no idea how interesting and sophisticated she was.”

Oppenheim, on the other hand, was fascinated with Jackie Kennedy since he was a kid. “My mom admired her and saved all the newspapers and magazines from the period. I would leaf through them when I visited my grandmother. As I got older, I was always reading material about the Kennedys at this period of time. I was very lucky that Chris Matthews [host of MSNBC’s “Hardball”] gave me my first job out of college here in Washington. He is obviously a brilliant Kennedy historian and has written several books about them. My fascination only grew then.”

As for his script, “I wanted to tell a side of the story no one had ever heard before and I always thought, as Pablo said, people have a superficial familiarity with Jackie. But I think most people don’t appreciate the role that she played in determining how we now remember her and her husband, and her political savvy and her really early appreciation of the power of television, imagery and iconography in terms of influencing our politics. That came through in the 'Camelot' interview she gave a week after the assassination, it becomes a nice bookend and a frame I used to write the script.”

However, that Jackie was the architect behind the link between Camelot and JFK was also news to him. “Like Natalie, I had assumed for many years that label had been applied to the Kennedy era from the time he had been campaigning. Certainly, from the time he was elected and during his administration. But she invented the 'Camelot' comparison in this one particular interview for Life magazine. To secure her husband’s legacy, she could have rattled off all his various policy accomplishments but, instead she references a Broadway musical, an Arthurian legend, and that is what sticks in people’s minds for decades and will live forever.”

Asked about how Jackie transformed the role of being a presidential spouse, Portman observed, “After Eleanor Roosevelt, she certainly was one of the first to have a real agenda as a first lady. To think that they were only in the White House for a little over two years and she undertook this historical house restoration, which was such an enormous project, and she had also just had a child. She gave birth before the inauguration."

Portman then shared one of Jackie Kennedy’s favorite stories about what happened when her predecessor, Mamie Eisenhower, gave her a tour of the White House. “They took her wheelchair away and it was just a day or two after she had a C-section. They made her walk around the White House for hours. She said [in her breathy Jackie voice], ‘I don’t think that was very nice of her.’”

While Marcus took some questions from the audience, she cautioned that the panel was trying to avoid commenting on “certain recent events.” With that in mind, the first inquiry was, “Now that you know everything about being a first lady, what advice would you give any imaginary first lady, including but not limited to Melania Trump?” Portman gave it a try and went for gallows humor. “Don’t ride in a convertible in a motorcade?” Somewhat uncomfortable laughter followed.