Alfre Woodard steals Steve McQueen’s "12 Years a Slave" in her four minutes on screen, just as she stole Robert Altman’s "Health" (1980) away from a large group of flashy and established stars, though maybe “steals” is not quite the word. She brings "12 Years a Slave" to a new level, something a lot more unconventionally human than what we have so far seen. As Mistress Shaw, a slave who has attained a higher status as the lover of her enslaver, Woodard has a lot to accomplish in those four minutes McQueen has allotted her. She has to offer a peculiar oasis to Solomon (Chiwetel Ejiofor), the free man who has been brutally captured and held on a nearby plantation, and she also has to make a crucial judgment on the life around her and make it seem like more than wishful thinking. Her scene is a hinge in the film. 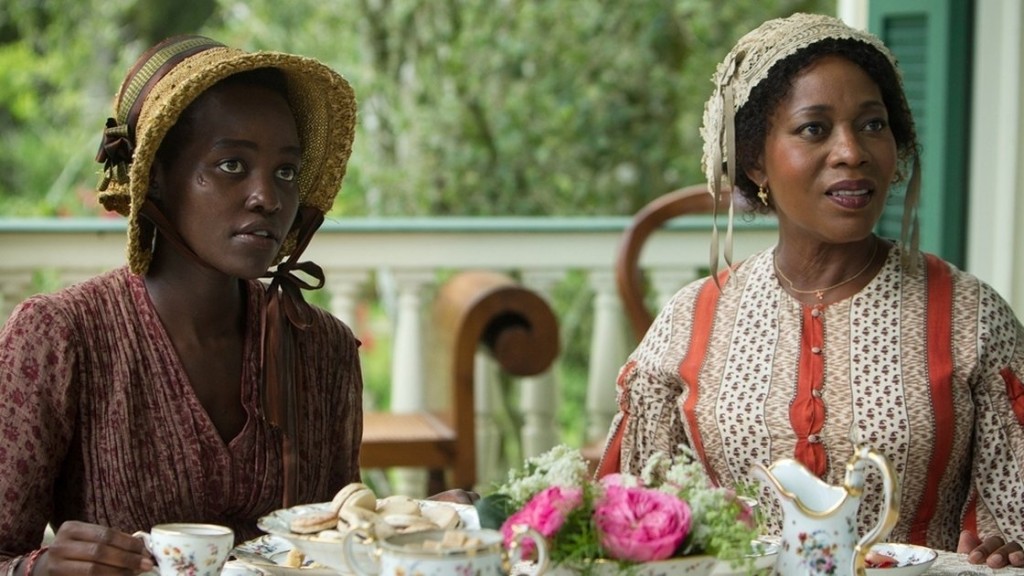 Sitting on her porch with Solomon and the continually violated Patsey (Lupita Nyong’o), Mistress Shaw smiles at them and presides over a kind of mad tea party. Mistress Shaw, as Woodard plays her, is maybe a little mad, but her madness could also be seen as will power. There's something deliberately absurd, or absurdist, about her, and she can afford this luxury because she has come to some conclusions about her place in the world and her debased milieu. McQueen has given Woodard what seems like the key line of his film, and she pronounces it with such airy authority that it has haunted my consciousness ever since I heard her say it. "The plague of the Pharaohs is but a poor sample of what awaits the plantation class," she says to Solomon, in a way that makes it seem like an open-and-shut case that barely touches the hem of her own private, locked-away consciousness. This line augurs earthly punishment for the American South, but Woodard suggests much more than that. Will there really be a judgment for human evildoing after death? I'm assuming you've given this idea some thought at one time or another. I’ve never been sure. But I’m slightly surer that there might be because of the smilingly certain way that Woodard says that line.

Woodard made her film debut in Alan Rudolph’s highly eccentric "Remember My Name" (1978). She has racked up 103 credits since then, and a lot of her best work has been done for television. In the 1980s, she won Emmys for her performances on the TV series "Hill Street Blues" and for the pilot of "LA Law", where she played a rape victim who is dying of leukemia, a heavy load for any actress to carry, but one that Woodard lightens with the shy, particular details of her playing.

Woodard’s large eyes are so intensely direct when she focuses her attention on something or someone that they might be intimidating if the base of her talent wasn’t so unabashedly warm and tender. Look at the way her eyes hone in on her scene partner Ving Rhames in this scene from the TV movie "Holiday Heart" (2000), as if they could actually reach out to touch him. Watch the way she listens to him, disengaging sometimes and seeming to stare into her own resentment and then gradually starting to soften for him:

A generation of African-American actresses have done the "Somebody Almost Walked Off With All My Stuff" monologue from Ntozake Shange’s "For Colored Girls Who Have Considered Suicide When the Rainbow Is Enuf," and it is nearly always played on a note of rambunctious, self-actualized defiance, yet look at the muted, almost furtive way that Woodard chooses to play it in this 1982 PBS film of the play. She doesn’t like to hit us with committed defiance or anger. Woodard is drawn to emotions that actors usually skip or leave out, feelings of inadequacy, self-doubt, lack of center, worry. She can be very internal, but when her searchlight eyes really turn back on themselves, you can see all of the things that most of us hide. Watching her here is a little like seeing someone’s messy room with clothes on the floor and an unmade bed. Woodard wants to be loved for herself, unmade bed and all, and she is scared that she won’t be:

When Woodard turns her attention to sex, she is never overt about it. As with everything else, she comes at it sideways. "My entire career has been a matter of slipping it in when they don’t know it’s coming," Woodard has said. "I'm here because I didn’t try to come through a door. I came in through the window. Because they weren't going to let me in through the door. Ever!" In a TV adaptation of James Baldwin’s "Go Tell It on the Mountain" (1984), a fully-clothed Woodard exudes sex in her first scene with absolutely no obvious sexual signifiers, just the buzzing tone of her smoky voice and the way she moves as if she is ill and only sex can possibly cure what ails her.

In two of her best-known roles, "Cross Creek" (1983), which earned her an Oscar nomination for Best Supporting Actress, and "Passion Fish" (1992), Woodard was asked to play helpmates to white women, and she did her self-effacing, detailed best in both of those parts, but she is far more memorable as a weird dork moved by surprising impulses of unconscious sexual energy in "Miss Firecracker" (1989) and as a vibrantly hedonistic woman in "Down in the Delta" (1998), where her responses to life are always very extreme. The root of Woodard’s talent is the depth of her responsiveness to outside stimuli, and her formidable craft shows in the way she is able to make smooth transitions between such extreme feelings without ever tripping over any of them.

Her movie career is studded with small placeholder roles, cops and judges and school principals, but on television she has been able to do August Wilson’s "The Piano Lesson" (1995) and Carson McCullers’s "The Member of the Wedding" (1997), where she reinvented the role of Berenice and turned it inside out. Ethel Waters, the original Berenice, gave a major performance of that part both on stage and in Fred Zinnemann’s 1952 film. The way Waters played her, Berenice was wearily finished with a lot of things in life, but Woodard’s Berenice, by contrast, is a woman who still seems to have some options, and so her gradual loss of those options as the play goes on seems even more tragic than it did with Waters.

As a black woman in show business, Woodard has had to deal with many of the limits that others seek to place on her, but the remarkable thing about her career is what a haul she has managed to make in terms of varied but usually non-ostentatious roles across a wide range of moods. She can be both restrained and bold at once, both sexy and withholding, commanding yet as cautious as a cat intensely watching for any sudden movement. Her achievement as an actress is singular because Woodard will never pretend that she is more confident or in charge than she actually is. She wants to show us the sidelong feelings of people who have little power but still harbor a few small hopes. And that’s why her performance in "12 Years a Slave" feels so crucial to the narrative of that film and so emblematic of the creative character of one of our best American actresses.