A Movie Under the Stars

When I was a kid growing up in Houston in the early ‘80s, I lived right next to a drive-in theater. I distinctly remember on more than one occasion my grandmother taking me into the backyard on a Friday night, raising my little self over her head so I could catch a glimpse of the movie playing on the gigantic screen just a couple of miles away. On other occasions, my family actually took the plunge and drove our car to the place to check out a movie or two. I definitely know that is where I caught Robert Altman’s insane adaptation of “Popeye” for the first time.

Shortly after that, the drive-in shut down.

I never knew the name of the place until I snooped around on the Internet recently and found out it was called the King Center Twin Drive-In, which opened way back in 1952. It consisted of two giant screens, back-to-back, in the center of the lot. 1,200 automobiles could fill up the place in its prime. It closed at the end of 1981. Apart from a now-defunct Burger King that opened up near the edge of the property in the mid ‘80s, that patch of land stayed vacant throughout my time in Houston, a few, upright speaker poles sprinkled here and there.

A couple of recent things made me trip back to the past and recall my drive-in memories. Last month, I interviewed a film historian who co-created his own drive-in for the summer. Once a month (this Friday, in fact), he’ll play 16mm films for a parking lot full of people, outside a Durham shopping center. Also, last month marked the 82nd anniversary of the first drive-in opening. Way back in 1933, New Jersey businessman Richard Hollingshead, Jr. started the Automobile Movie Theatre, a 400-car spot in Pennsauken. Although it was only around a few years, it laid down the groundwork for the drive-in boom that took off during the postwar era. Drive-ins eventually became as American as apple pie.

As someone who was exposed to open-air moviegoing at a very young age (later on in my childhood, my family would frequent another, long-gone drive-in, where we caught “Breakin’” and “Cannonball Run II” in the same summer!), I look back on drive-ins fondly. Even when the movies were lousy (I think that was a prerequisite, especially in the ‘70s when drive-ins were a haven for B-movies and grindhouse fare), it was still a giddy, transcendent experience. I mean, watching a movie and hanging out with the fam, chilling in your ride, munching on food you either bought at the snack bar or snuck in your damn self. Of course, the drive-ins were also locations where couples could spend some quality time, usually in the backseat, fogging up the windows or whatever. 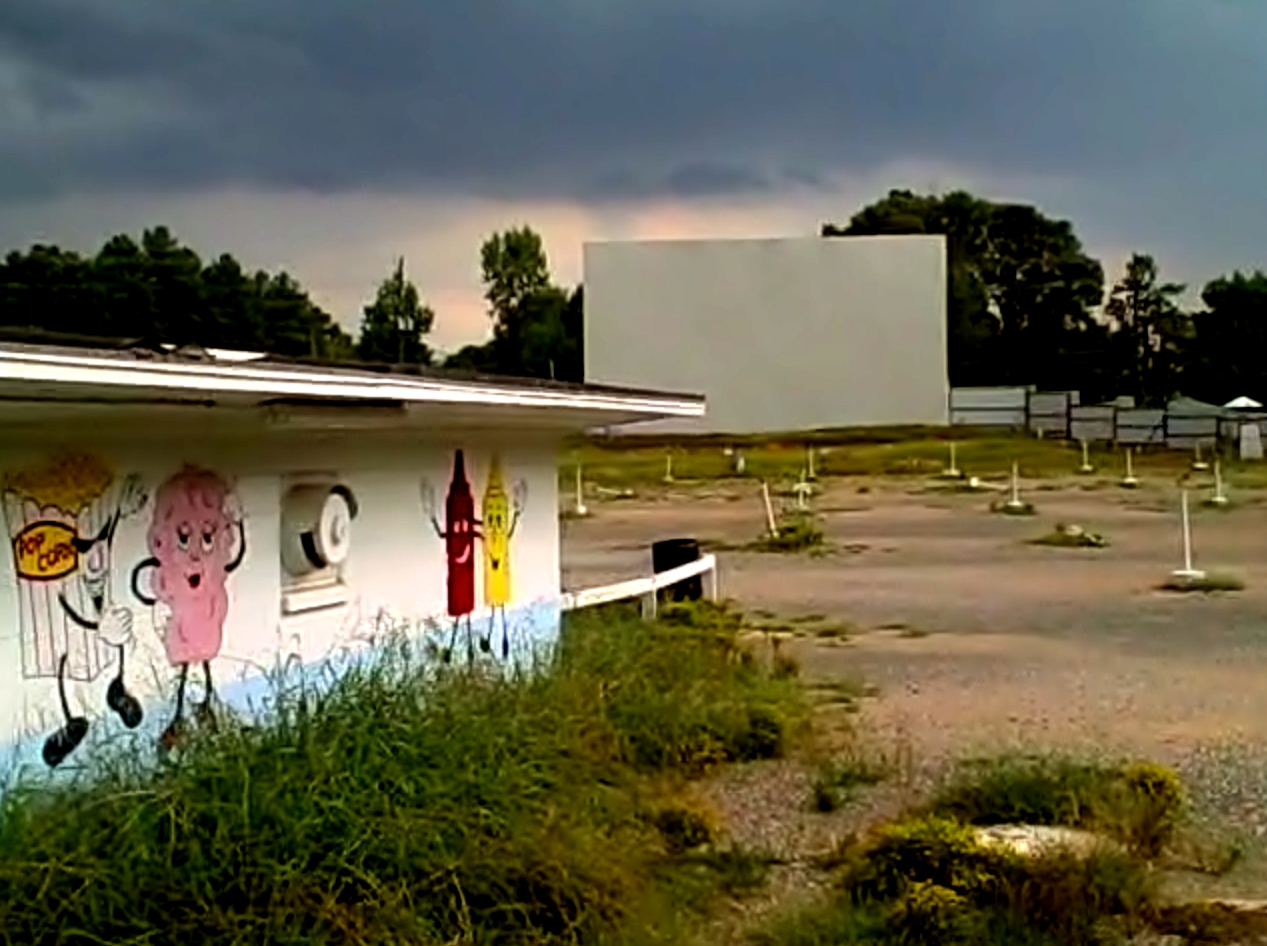 I found myself dealing with that experience again (watching movies at a drive-in, not fogging up the windows with somebody, unfortunately) when I moved to North Carolina eleven years ago and got a job as a film critic/reporter for the daily newspaper in Raleigh. When I was called on to write a piece about where people could catch outdoor movies during the summer, I saw there were places (museums, amphitheaters, etc.) that had seasonal, outdoor-movie programs. But the region also had one, last drive-in: the Starlite Drive-In in Durham. Open since the mid-1940s, it was the most fascinating drive-in complex I’ve ever come across. Not only was it a drive-in, where its lone screen played double features, but the snack bar also served as a video store and a gun shop. (I didn’t rent a movie or bought some heat the couple of times I went, but I did buy some delicious, fried mushrooms.) From sources I’ve talked to, there was a brief moment in the ‘70s when the theater played hardcore porn. Although the drive-in looked to be in a secluded part of town, I can’t imagine watching up-close and too-personal skin flicks all out in the open like that.

Sure enough, when I first discovered the theater that summer, a fire destroyed the theater’s screen two months later. Luckily, a community-wide fundraising drive garnered enough money to restore the screen. The drive-in re-opened a year later, having a few more months of success until the owner passed away a year and a half later, closing the place for good.

I commend anyone who tries to keep a drive-in going in this day and age. Drive-ins ruled during the ‘50s, where there were reportedly more than 4,000 drive-in screens. Last year, Nerve.com reported there are only 338 outdoor screens left, even listing them all. While open-air theaters are a novel concept, it’s never been lucrative. Unlike movie theaters, drive-ins can’t stay open during the day, or all damn year. I’ve yet to hear of a drive-in complex that offers up double features during the winter months. Also, movies—and movie-watching—have evolved throughout the past century. Both cable TV and home video made new, uncut movies easily accessible to couples and families, who realized they could get the same comfortable experience watching a movie by just staying at home.

But even though drive-ins are considered outdated relics, I still feel people (especially those youngsters who either have never been to a drive-in or even know what a drive-in is) are depriving themselves of a unique, moviegoing experience. People have gotten so used to heading to megaplexes, mingling with obnoxious neighbors who could ruin your viewing experience by talking/texting/snoring, some may not even be aware you don’t have to deal with any of that when you go to a drive-in. You’re having a shared experience watching a film with other people, but you’re mostly having it in the comfort of your own flippin’ car!

Since we’re still smack dab in the middle of the summer, it’s not too late to take in a night at the drive-in—if there is one closest to you, that is. The last time I went to a drive-in was a few years ago. I drove nearly an hour outside Raleigh/Durham to a place called the Raleigh Road Outdoor Theatre in Henderson, North Carolina. They were playing a Burt Reynolds double bill of “Smokey and the Bandit” and “The Longest Yard.” Yes, I’ve seen those films many times before. But I just wanted to have that experience I had so long ago in my childhood: all snug in my vehicle, the radio on so I could catch the film’s sound, watching a movie under the stars.

Sadly, I once again didn’t have anyone to fog up the windows with that night. Still, I had a wonderful time nonetheless.