A Horror Story For Our Times: Another Look at Bob Fosse’s “Star 80”

In her foundational 1970 tome The Female Eunuch, Germaine Greer wrote, "Women have very little idea of how much men hate them." In light of recent events in American life—and the mainstream normalization of that hatred—that seems less a pessimist’s perspective than it does a realist’s. With a new president-elect who openly remarks on sexually harassing women—and then denies it by saying they’re not attractive enough to accost—misogyny is just one of innumerable tragic realities the nation now faces. To be an ambitious woman in the public eye, whether she is a politician, a model, or anything in between, has always meant being subjected to public scrutiny that is unique to our gender. But as Americans stand on the precipice of a Trump administration, the degree to which male rage has overwhelmed the discourse—and to which public humiliation and assault of women is accepted—is newly frightening.

In Bob Fosse’s final film,“Star 80,” this collective male hatred could easily double as a thesis. For Playboy playmate Dorothy Stratten, it was a stalwart fact of her existence. The powerful, trusted men who steered the course of her life also failed to prevent her violent murder at the hands of her estranged husband.

The film follows Dorothy as she rises to fame as a centerfold, only to be shot and killed at the age of twenty. Her husband, Paul Snider, then violated her body before turning his gun on himself. Fosse’s work often veers into dark territory, but rarely with as serious an eye as it does in this 1983 film. Addiction, racism, disease and death all feature heavily in his vision, from “Lenny” to “All that Jazz.” But prior to “Star 80,” taboo subjects had a degree of decadent charm for the director. 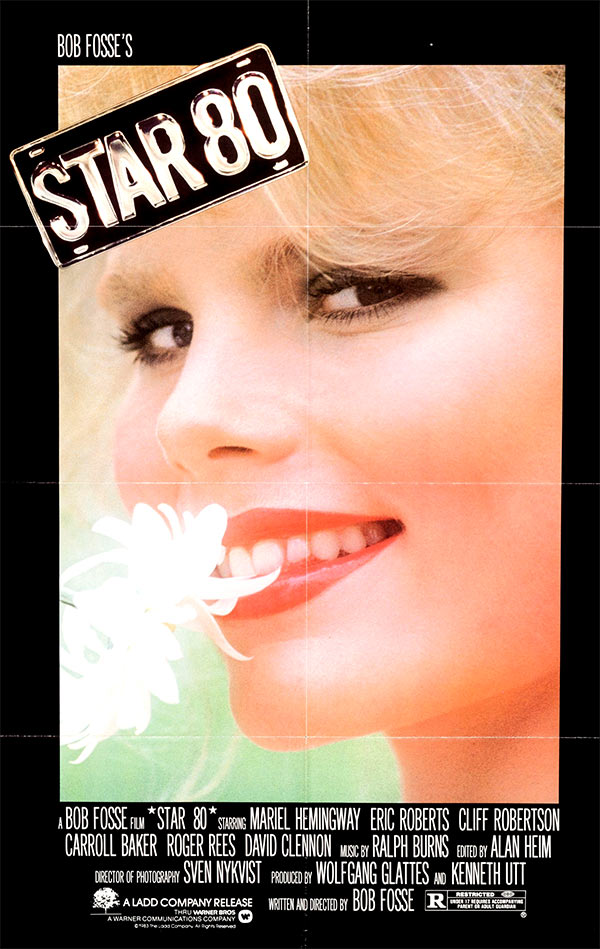 This is not the case with his final film. “Star 80” is far from genre material, though the true story it’s based on is the stuff of demented horror. Instead, it’s a terrifying and genre-less descent into the red mist of misogyny. Based on a Pulitzer Prize-winning piece of investigative journalism, Fosse traces the behavior of the men—a small-time hustler, a magazine magnate, and a movie director—who tried at every turn to market, control, and possess Dorothy for their own ends. And while it may not be a horror movie, it’s no great stretch to say that “Star 80” is one of the scariest films of its decade.

Mariel Hemingway, with her fulsome, apple-cheeked beauty, is a dead ringer for the real Dorothy. Breezy and pure as the driven snow, the blonde teenager is more Seventeen Magazine than centerfold material. But she is slowly "liberated" by a persistent, ingratiating older boyfriend, played by a mustachioed Eric Roberts. Dorothy is first approached by Paul Snider in the Dairy Queen where she works after school. Inhabited by Roberts with the shifty, restless neurosis of a used car salesman—or, indeed, a small-time pimp—Paul is instantly infatuated, working to impress Dorothy and her family with his faux-sophistication. Against her mother’s wishes, he eventually whisks her off to Los Angeles to become a model.

So, when Paul Snider walks into Dorothy’s life, it’s difficult not to watch from between your fingers. And yet, most of the violence in “Star 80” is implied rather than explicit. Compared to the gruesomeness of most horror films of the period, it’s positively tame. Yet it produces the kind of reaction that the horror genre itself isn’t often capable of. There’s something singularly traumatizing about it. 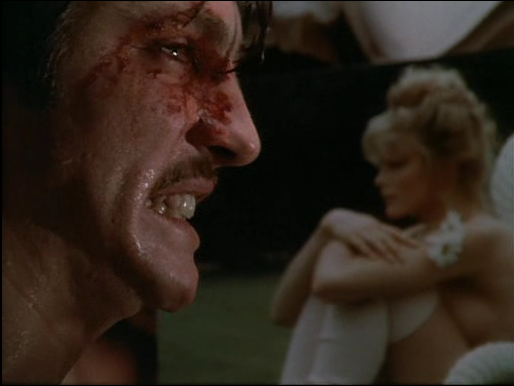 In a decade rife with "slice and dice" slasher movies, images of terrible violence against young women was strikingly common. From ice picks to the eye to chainsaws and kitchen knives, there was a litany of inventive ways to dismember female body parts. By 1983, when “Star 80” was released, “Halloween” and “Friday the 13th” had received their respective sequels, and dozens of copycats had come into existence. Inhuman monsters and the masked undead stalked and mutilated beautiful women at hitherto unknown rates. And if these potential victims were sexually active or in some way had ideas above their station? All the better dead.

Film critics and academics have long talked about the reactionary spirit of slasher movies of the era—generally seen as a response to women’s renewed social and sexual independence. In a 1988 book called Camera Politica: The Politics and Ideology of Contemporary Hollywood Film, professors Michael Ryan and Douglas Kellner wrote of the slasher film, "It was as if conservative filmmakers realized they could only get away with so much within the confines of realism. Otherwise it would appear that their representations indicated what they really thought should be done to women."

But “Star 80” is no slasher film. Instead, it returns to those "confines of realism," almost as a reproach to the genre’s casual attitude toward the mutilation of women. It literalizes what slasher films tend to make metaphorical—unfettered, raging misogyny. It lays bare the reality that underpins those dark fantasies, with their merging of sex and violence. And for an audience accustomed to a protective layer of genre, staring this reality in the face is a difficult proposition. Instead of being just an exercise in male rage, it’s about that rage. It makes no attempt to hide it, and the fact that it chooses not to disguise those ugly impulses means it’s pretty familiar to those of us who’ve been watching the news. 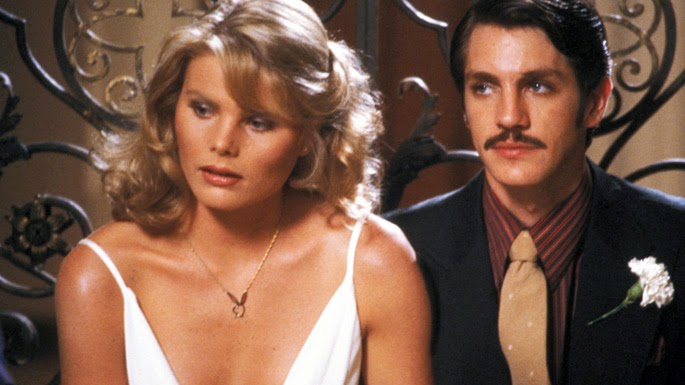 As for Fosse’s stand-in for the hockey-masked villain, Snider is all too human, even familiar. He’s a banal sort of weirdo, a misfit whose social climbing is oily and off-putting to nearly everyone he meets. He’s the kind of guy you avoid in a nightclub. But he showers his wife with affection and gifts; takes her sister to the fair; pledges his undying love constantly. Everyone is wary of him, and few are blind to the fact that he’s "bad" for Dorothy. He serves as life coach and parasite, reminds Dorothy to stand up straight and remember people’s names—molding her into a more confident, sexier version of herself. When his domineering behavior drives her into the arms of a famous film director, his obsession with her devolves into sheer derangement.

Dorothy’s misplaced sense of loyalty—her basic "niceness"—is ultimately what damns her. In their final confrontation, where she tries to permanently extricate herself from her marriage, she does everything she can to placate Paul. Even as he grows increasingly volatile and threatens rape, she essentially capitulates to him. But the film never places blame on Dorothy—merely the structure of the exploitative world around her.

In one telling cut near the conclusion of the film, Fosse moves from the sordid scene of the murder to Hugh Hefner’s office, where the mogul discusses his pick of fresh meat from middle America’s young Playboy hopefuls. One recalls Dorothy earlier in the film, parotting, "They like girls to look young and wholesome."

The next shot, as if to reinforce that earlier statement, is of Dorothy’s tween sister, who, blissfully unaware of the tragedy, draws a picture while the radio intones platitudes in the background. This short series of shots implies what little else in the film does; that Dorothy Stratten was merely an extreme case in a long line of innocent girls who were grist for the mill.

Curiously enough, Fosse was quoted as having said that Snider was a version of himself, had he not been successful in show business. This comes full circle in the original Village Voice article that the film is based on, "Death of a Playmate." In it, journalist Teresa Carpenter suggests that the sleazy hustlers who populate Hollywood to exploit women are all of a similar moral standing. It’s just a matter of how successful and sophisticated they can make themselves appear. Although this was mostly directed at Hugh Hefner, it seems to be a thought Fosse took to heart. In a lifetime spent choreographing and perfecting female performers’ bodies for the stage, Fosse seemed to see dark parallels between Snider and himself. Perhaps “Star 80” was a way to exorcise those demons, or to explore that he may have played a role in a sunnier and more well-heeled side of the very same exploitation.

Nonetheless, there’s no shying away from the central theme of the film. As Teresa Carpenter suggested, the "philosophy that a woman could be possessed" had a major role to play in Dorothy’s murder. The entire edifice of patriarchy and male rage came crashing down on her, and Fosse presents it to us matter-of-factly. Dorothy had no idea how much the men in her life wanted to own and use her; how much her sexual and financial power terrified Paul Snider. She died for it. Now that’s a horror story for our times.