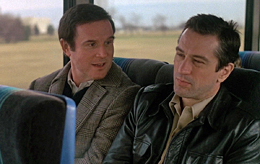 Can any subject matter end up making a great movie?. That's the question that Siskel & Ebert's old review of "North" left me with many years ago. While Roger blasted the film's overall, twisted theme (if you don't like your parents, dump them and go get new ones), Gene dismissed this as the main problem by saying: "any subject can be done well".

Can this last statement really be true? I've been thinking it would be interesting to try to prove the point, and the best single example I can think of is Martin Brest's 1989 "Midnight Run". If you doubt for a moment this movie had seemingly insurmountable odds to be good, just check each of the following descriptions, all of which clearly apply to it:

1) It is a buddy-cop / action-adventure comedy. There has probably been no movie genre that has provided us with a higher number of predictable, brainless features (before and after "Midnight Run").

2) In many ways it is your typical odd-couple, cross-country adventure in which the characters hate each other in the beginning, get to know one another during the course of the movie (while constantly screaming at each other) only to become friends by the end.

4) Both protagonists have done other movies of similar characteristics that have failed in just about every way (think "Showtime", "15 Minutes", "Analyze That", "Isthar", etc.).

5) It is a bounty hunter movie, and if you are fine with this idea, just think back and remember what the recent "The Bounty Hunter" was like. 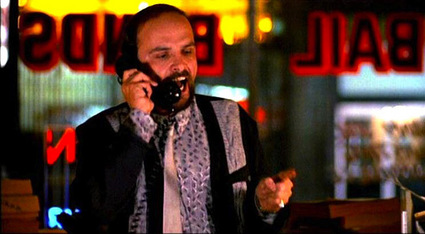 In "Midnight Run", a Chicago ex-cop, now bounty-hunter, played by DeNiro, is hired by his bond-bearer weasel acquaintance to find an ex-accountant to the Mob who also happened to have robbed them of millions of dollars which in turn he gave to charity. What DeNiro's character doesn't know is that the job hardly consists of simply bringing back the seemingly peaceful accountant but instead he'll have to compete with: (a) the FBI who want to arrest the guy, (b) another bounty-hunter hired as a safety net by the same low-life, bonds-bearer, and (c) the Mobster in question who simply wants to whack him (and coincidentally, just so happens to be the man who ran DeNiro out of Chicago).

So why does "Midnight Run" work so well? For starters, the humor feels like it springs from every character's eccentricities; add to this the fact that they all have these diverse, believable motives that have them constantly colliding against each another and all of this serves to make their situations all the more funny.

There are these 4 running jokes: throughout the movie:

• the impersonation of a curiously named FBI agent;

• the fact that every involuntary deviation from DeNiro's original plan ends up saving the leads from being arrested or killed;

• a certain character's insistence of constantly going out for donuts; 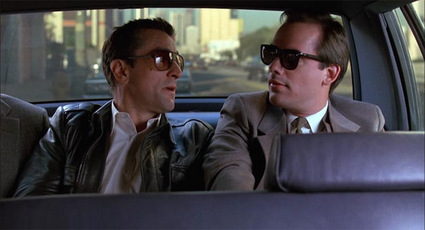 ...and they are all repeated over and over again, almost obsessively, but to our amazement they never cease to work which tells us the filmmakers had confidence in their material as well as a clear grasp on what made them funny in the first place, this wasn't just a happy accident. Even when talking about the seemingly preposterous $20 bills counterfeit scene, DeNiro and Grodin managed to succeed in making it feel true to their characters; they play it so well many of us would likely be willing to join the non-too bright group at the bar in handing these guys our money. 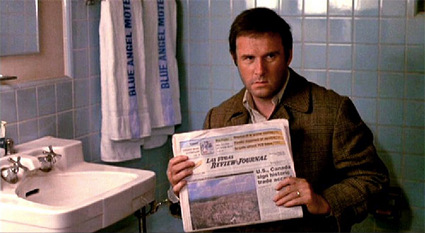 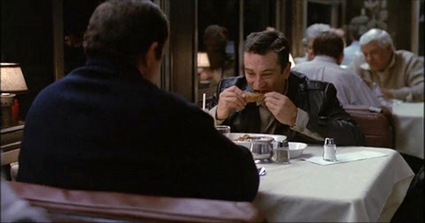 The same applies to what must be the film's funniest scene which has to do with the dumbest way of anyone ever photographing a ransom victim. Part of the surprise when "Midnight Run" was released came from the fact nobody associated DeNiro with comedy very much back then, this obviously has changed throughout the years and even though he plays the serious man to Grodin for most of the film, his jives on those who want to beat him to the job are most enjoyable. Notice also how nobody considered toning down the dialogue in order to get a much reachable PG-13; the filmmakers seemed to realize this is precisely the kind of talk that would come out of people like this and that's that. 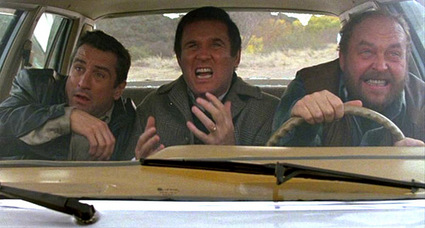 The action scenes in "Midnight Run" are perfectly adequate but they're hardly what make the film memorable, instead it is the human element that lends gravity to "Midnight Run": the improvised family reunion, our growing notion that Grodin's constant advice on DeNiro's messy life is more than a mere distraction to get him released and both characters slowly coming to grips with the fact that there's every reason for their emerging friendship to exist, and not simply because the script required there to be one. This doesn't mean in any way that the pay-off, (which turned out to be a beauty) is a predictable one and the best thing about it is that none of the leads had to compromise the natures or the positions they sustained throughout the movie, in order to achieve a well earned happy ending. 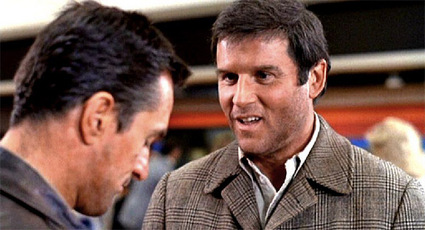 All of the evidence I bring up points to George Gallo's script as the main reason behind the film's qualities but one must not ignore director Martin Brest, whose took all these seemingly standard projects in the 80s and 90s which included "Going in Style", "Scent of a Woman" and even "Beverly Hills Cop" (which was said to have been a mess in its early stages) and took them to the next level(s). It's too bad he ended said, last decade with the dreadful "Meet Joe Black" and started the 00's with "Gigli" which I very much doubt helped his chances of working on new projects.

"Midnight Run" is not precisely a profound masterpiece, it is simply a great, unpretentious movie that works perfectly at what it does and ends up surpassing our expectations, what's more, it's hard to come up with a finer example of this particular genre. What personally amazes me is how much more I tend to come back to this particular feature than to the many, award winning, more ambitious features from its time period. We often go to the movies with high hopes of seeing something special only to end up disappointed but life seems to have a way of evening things out by occasionally doing just the opposite What better example than "Midnight Run" to illustrate this point?