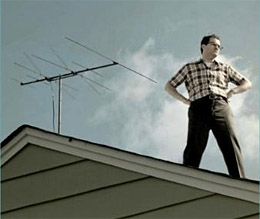 No wonder so many people thought Jesus was a heretic! All this talk of a kind and forgiving God? I mean, did he skip the bit where God asks Abraham to kill his favourite son? Wasn't flooding the entire world a little rash? Can ordering that hit on Amalekites be classified as reasonable behaviour? Let's face it, Old-Testament God could use a little anger management.

In this video, I tell some Jewish folk tales:

Olivia Collette is a writer from Montreal, Canada. She's blissfully agnostic despite - or perhaps because of - her unwavering love of mythology. Read her blog at Livvyjams or follow her on Twitter at @Olivia_Collette.

Gnostics had an explanation for God's recklessness: dude isn't the real God. According to them, that deity in the Old Testament is the result of an abomination. Some angelic being - an aeon called Sophia - mated with herself instead of a proper consort, and out came the Demiurge, whom Sophia immediately abandoned upon realizing what a hideous thing she'd done. Because the Demiurge was stuck on a cloud all by itself, it assumed that everything belonged to it, so it started creating things (the world, animals, Adam and Eve) to have stuff to possess and control. The Demiurge was ignorant and selfish, which explains its belligerence and general brattiness towards its own creation.

Unfortunately, this story never made the canonical cut because Gnostics just couldn't get organized. The story also distinguishes between the One True God - who is light and goodness and truth and love - and Creator God, that angry dude from the Old Testament. And if there's any legitimacy to this Gnostic tale, then the God that's been running things around here is full of rage.

If God is there at all in the Coen brothers' "A Serious Man," he's of the unseen, unknown, and scathingly unfair variety. Their plot is rooted in folkloric storytelling, from the tragic hero to the things that happen in threes. If you ask the Coen brothers why they keep torturing poor Larry Gopnik, they'll probably say, "Because we can." And really, isn't that the kind of answer a god might give?

In Larry Gopnik's world, God is not merciful. It's easy to equate Larry with Job, who's being put through the ringer at God's go-ahead. Then again, hasn't a mathematician's faith already been tested? After mapping out the equation of the uncertainty principle to his students, Larry tells the class, "It proves we can't ever really know what's going on." 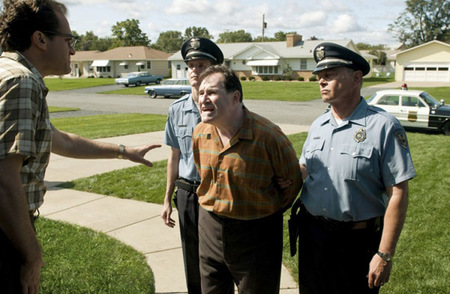 Larry's perfectly capable of living with that uncertainly until a bunch of certainties take turns taunting him. They don't even beat around the bush about it, either. His wife tells him very plainly that she's met someone else and wants a divorce. In an irritatingly condescending manner, her lover gently muscles his way into the Gopnik home. Larry's anti-social brother has a severe gambling problem. His son's accrued a debt through a Columbia record scam. One of his students is trying to bribe his way into a passing grade. And despite all that, Larry has to keep it together because he's up for tenure. 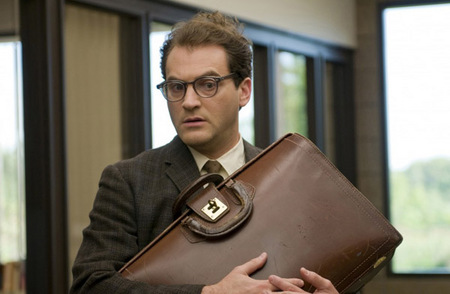 Seeing how much he's struggling with his life's sudden eventfulness, a friend advises Larry to seek counsel from a Rabbi. There are a few in his congregation, and in the pecking order, the eldest seems to be the least effectual and the youngest is the most idealistic. Each also represents a type of godhood.

Larry's first consultation is with young Rabbi Scott, who advises him to look at things from a fresh perspective, to seek inspiration in the littlest details, which are as great as God is good. Larry gives it an honest shot until his wife's lover dies, which somehow gets him stuck with the funeral bill.

This leads him to Rabbi Nachtner, who tells him the story of a dentist who found Hebrew etchings in his patient's teeth. Trying to understand the mystery, the dentist spends countless nights searching the Kabbalah and the Torah for answers. What does Rabbi Nachtner make of such an oddity? He doesn't know, and besides, God "doesn't owe us an answer. He doesn't owe us anything. The obligation runs the other way." Eventually, he tells Larry, whatever's troubling him will just go away, like it did for the dentist. Larry is willing to entertain this notion until his dreams get unsettlingly immoral.

For problems of this nature, he's told to seek an appointment with Rabbi Marshak. But the elder Marshak can't be bothered. In an unquestionably God-like manner, he refuses to see Larry. The silver lining? Larry finally gets a direct answer.

Maybe it's out of character, but Larry wants to know what it all means. What the Rabbis can't tell Larry - either because it's too simple or too devastating - is that it's all rather meaningless. Case in point: at the end, Larry's doctor wants to speak to him "in person" about the results of his chest x-rays. That's code for "you've got cancer." The kicker, of course, is that Larry doesn't even smoke. 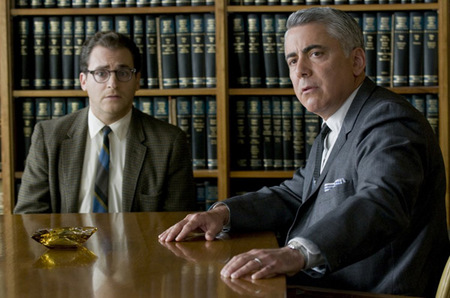 In the unraveling, Larry goes through three lawyers as well. Each is even less helpful than the Rabbis. They also have an interesting way of fitting into Larry's catastrophic narrative. The divorce lawyer can't quite find the legal loophole that would prevent Larry from paying for his wife's lover's funeral. The off-screen criminal lawyer leaves his mark by way of an enormous bill. And the real estate lawyer drops dead in the middle of a meeting. 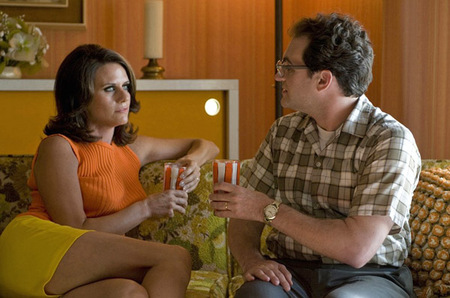 As though it's for our sake, the movie provides a calm and restful moment when Larry visits his neighbour's wife, whom he covets, and, all told, who's looking to be coveted. They share some marijuana in her viscid living room, and for a blessed instant, his problems disappear. It's when he doesn't make an effort to please anyone else that he pleases himself the most. But as some Jewish folk tales might warn, there's a price to pay for self-satisfaction, especially if you deserve it.

By the Coen brothers' own admission, there's no real significance to the folk tale in the opening scene. It's just there to set the tone, and it does so more skilfully than might be intended. On a cold winter's night, a man comes home and tells his wife he's just been rescued by Treitle Groshkover. His wife's face hardens; Treitle Groshkover's been dead for 3 years (she thinks). This, to her, can only mean one thing: Groshkover is a dybbuk (or a demon, for us "goys"). When Groshkover arrives, she tests his immortality by stabbing him in the heart. He isn't even bleeding, she points out. And it's true. For a few, hair-raising seconds, he doesn't. But then, as if to prove he's human, blood pours out of his wound. He asks, rightly, who the dybbuk really is when a woman stabs an old man in the heart because of a superstition she can't possibly prove. He wobbles out of their home, knowing when he's not wanted.

Was Groshkover a dybbuk or wasn't he? The Coens don't owe us an answer.