When the Great Gray Cloud comes to call

Yesterday it was cold and rainy and glum. I searched for background movies to put on while I wrote, but my usual George Cukor go-tos weren't doing the trick. I branched out. Shane, Forbidden Games, Love & Anarchy, Mogambo, and various classic TV shows were turned on and shut off. Nothing worked. I decided to take a twenty minute nap to shake the damp.

Twenty minutes turned into two hours and when I awoke, Bess McNeill was on my mind. As though she had been there all along. Sitting in the corner quietly, waiting for me to notice.

You know a film has succeeded when you miss its heroine the way you miss a dear friend. Suddenly their absence is keenly felt. Who knows what tiny thing will bring it to your attention. Maybe the shape of peeled linoleum on the floor, the color of a shoe, or the texture of a brownie. Sometimes there is simply no rhyme or reason. Something in the smell of the air or the arrangement of the furniture or the rhythm of my nap dreams whispered Breaking the Waves. And so I put it on.

The 1996 film is violently tragic, sad, and at times difficult to watch. In Scotland in the early 70′s, Emily Watson plays Bess McNeill, a strange childlike woman. Bess falls in love with Jan, a Norwegian oil rig worker and marries him despite the wishes of her church and family. After a few days of wedded bliss and recently devirginized sex, Jan returns to the oil rig. Madly in love, Bess can't bare his absence and prays for his return. The next day Jan is badly injured in an accident and is flown back to shore. Bess of course believes his injury was the result of her prayer gone awry. Paralyzed and suffering vague mental impairment, Jan urges Bess to sleep around reporting back to him with the sordid details. A slave to god and love, Bess reluctantly agrees. 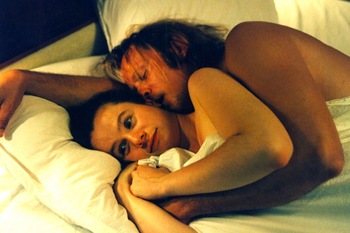 Lars Von Trier has always explored ideas of vulnerability, sacrifice, and subservience by those on the outside of the community. Examples can be found in nearly all his films, most clearly Dancer in the Dark*, The Idiots, Dogville, and Medea. He has a particularly keen understanding of it. I suspect this has something to do with his own familiarity with That Great Gray Cloud.

And oh what a cloud it is. 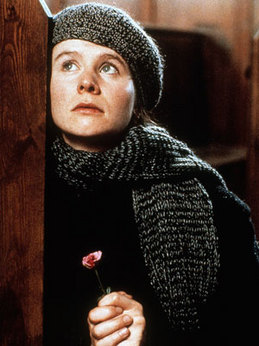 Writing has the habit of revealing ideas once cloaked in mystery. As I write now, I realize my desire to be with Bess is not as strange as it at first seemed. Bess is full of emotion. She is concentrated passion. Damp, wilted, and schlumpy I needed to see the world through her eyes. To be with her. To lay on the floor. Spread Eagle. On my back. Limbs limp, surrounded by Bess who walks around and around in her wedding dress.

On days when that Great Gray Cloud comes to call, you are devoid of feeling.

A dusty and yellowing newspaper. 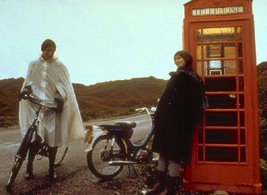 You are not sad. You are stale. You cannot experience life. Though Breaking the Waves can be traumatizing, Bess allows you to feel, and to feel, and feel. You love her immediately and totally. Her curiosity and zeal. She is excited about life without embarrassment about her enthusiasm. As everyone points out, Bess isn't "right in the 'ead," but her impairment slowly becomes unimportant. The pity we feel for Bess, begins to feel misplaced. Her life is difficult and tragic, but while she lived she lived. Her behavior was not dictated by any idea of appropriateness. She knew what mattered to her, Jan's love. Whether it should or shouldn't have had such power is besides the point. Bess knew what was important and gave herself to that with a selflessness those in her church, supposedly devoting themselves to the lord, will never know.

Bess sparkles, all others fade.

Most importantly, she loves.

And with deep affection come the extremes of emotions. Joy, desire, pain, sadness, and abandonment. Bess accepts vulnerability and exposure in a way those of us constantly protecting ourselves, cannot comprehend. Observing another person's weakness reminds us of our own. Our brain connects this observation to one thing and one thing to another. Before you know it we are faced with the inevitability of death.

When we see the vulnerable person, we look our mortality in the eye. As this is a part of our being we try desperately to deny, vulnerability boldly displayed provokes hostility and violence. We, like Bess' community, rush to stamp it out, finding all manner of reasons why it's untoward. Though the strength of Bess' emotions take her to the bottom of valleys, her ability to feel, without pretense or self consciousness, also grants her access to a euphoria few can reach. If occasional intense joy, no matter how enveloping, comes hand in hand with occasional extreme pain, is it worth it? In the video I claim to not know, but now at the risk of romanticizing everything in the world, I say yes. I will take the highs and lows of strong passion over a restrained emotion that never tests the limits of it's boundaries. That's like living in a very large house with a key to only a few rooms. You might be missing out on some beautiful views. 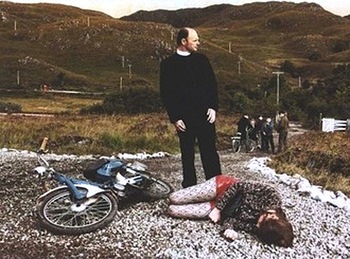 Maybe, just maybe, blind faith in love (and the consequences that come with that allegiance) is better than a life of caution.

Maybe Bess's world is the right world. Maybe ours is the wrong one.

* "Dancer in the Dark" and "The Idiots" followed "Breaking the Waves" to complete Von Trier's "Golden Hearts" trilogy, films about women who maintain their "golden hearts" despite adversity. Here is Von Trier on the origin of the idea (from Von Trier on Von Trier):

" I prefer working with extreme ideas, and I wanted to make a film about 'goodness'. When I was little, I had a children's book called Guldhjerte (Goldheart), which I had very clear and happy memories of. It was a picture book about a little girl who goes into the forest with come slices of bread and other stuff in her pockets. But at the end of the book, when she's got through the forest, she's standing there naked and with nothing left. And the last line in the book was: '"But at least I'm okay," said Goldheart.' It seemed to express the ultimate extremity of the martyr's role. I read the book several times, in spite of the fact that my father thought it was rubbish. The story of Breaking the Waves probably comes from that. Goldheart is Bess in the film. I also wanted to make a film with a religious theme, a film about miracles."

Kartina Richardson's film commentary site is Mirror, and her blog is ThisMoi. She tweets at @ThisMoiThisMoi.