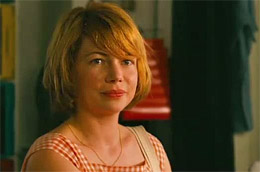 "Take This Waltz" materialized out of a humid summer day in Toronto and made me tremble and fall in love... with who or what I'm not sure; the city yes, and maybe the idea of the in-between.

There is something incredibly delicate and beautiful about the thought of in-between: of that space of the possible, of movement, of choices being sought and yet to be made, of freedom and abandon and all the stuff that dreams are made of, but yet to solidify. It is a place of alchemy. Some call it a moment - a fleeting moment.

But how fleeting can a moment be? How long can flight of fancy last before running out of steam? How long can possibility behold, before crystallizing into another hard, undeniable piece of reality? What will we do with those pieces of reality? What will we do in the bubble of those moments, knowing full well what awaits us outside of them? These are the questions asked by Sarah Polley's second directorial feature through its sun-drenched and color-bursting lens of Toronto, and it is luminous to watch.

The film opens with Margo (Michelle Williams) and Daniel (Luke Kirby) in a small heritage town on the east coast of Canada, where historical tales are being re-enacted by live actors in broad daylight. Case in point: an adulterer being thrashed in a public square. Margo, a writer on assignment, is dragged into participation against her will and further embarrassed by Daniel who doesn't shy from egging her on. The foreshadowing is hard to miss, nor the spark between two strangers. 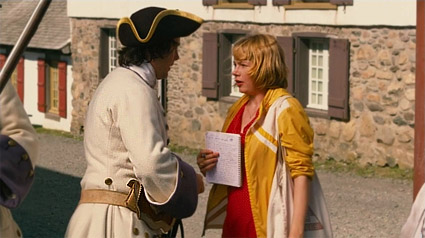 That spark is renewed when Margo and Daniel, by chance, find themselves beside each other on the flight home. They banter and prod and confess and react. By the time the taxi drops them off at their respective doors - across the street from each other - the mutual attraction is undeniable and Margo makes a feeble attempt at sobriety: "I'm married." 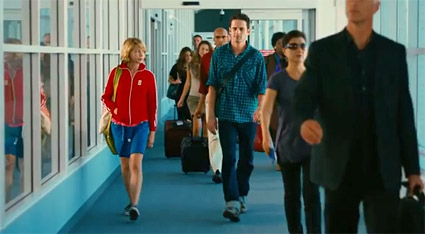 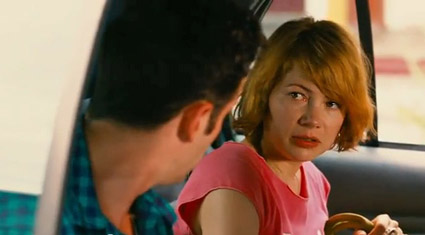 This sets up a premise of conflict and romance which, though abundant, are tools that Ms. Polley deftly use to dig at the deeper, mysterious motivations behind our common desires: for each other, for ourselves, for life.

Margo and Daniel desire each other. It may have begun as chemistry between beautiful strangers, but it didn't end there. They key into each other with an intense curiosity that breathlessly draw them to each other's company: in morning strolls, in cafes, by martinis, by the water, on the water, in the water...they glide toward each other with a passion that is only exalted by the sliver of moral restraint keeping them physically apart, if only for now. 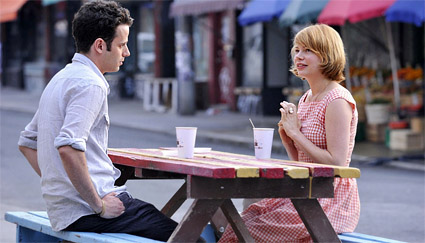 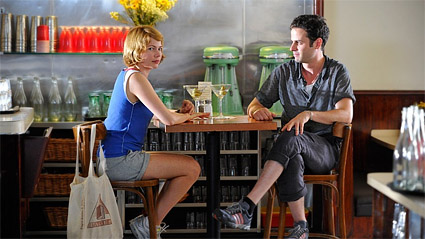 Margo and Lou (Seth Rogen) share a marriage peppered with joy: of good family, of good intentions, and of good comforts. They live in one of those sizable but cozy houses in a nice downtown Toronto neighbourhood, one with a generous porch, roomy enough for the familiar jokes and playful desires they share in life and love together.

But those two desires are contradictory by societal and moral standards, and within that lay Margo's struggle to make sense of the life she has and the life she wants. It would be easy if the distinction is clear, but here Ms. Polley intelligently suffuses the dilemma with complexities of real life: where attraction ebbs and flows and comes in different, if comparable forms. Margo is in love with two men and in lust with one of them, or maybe both, but only in love with one, or maybe both. It is confusing, and as Margo explores and retreats and make choices that seem simultaneously childish and sensible, we feel for her, even if we don't quite understand her. 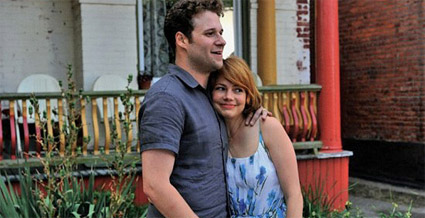 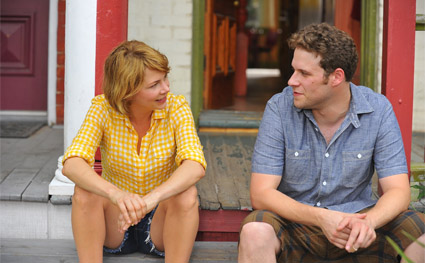 And that is the beauty of this great film: a sense of mystery and intimacy that congeal the desires coursing through currents of our lives, which are often frustrating and defeating and unknowable, but always alive, always passionate, and eventually meaningful.

Ms. Williams shimmers as Margo, dressed in vibrant hues and rosy cheeks, sweaty with a dreamy kind of sweetness and at the same time, decisively disciplined and honest in what she seeks. "You're always making chicken," Margo says to Lou from the doorway of their kitchen, as poultry simmers on the stove. It is both a simple assertion and a vague plea... for what? She perhaps doesn't know, and neither do we. Everybody likes chicken and Margo is only human, but at least she had the courage to say it aloud, and that is admirable. 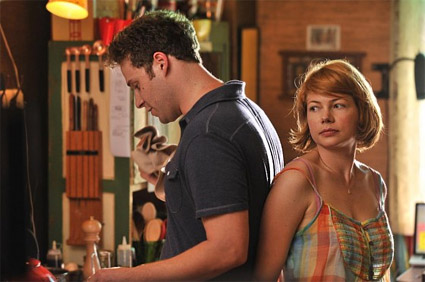 This courage if left to drift blindly would impart frustration and weak cinema. Thankfully, in Ms. Williams and Ms. Polley's capable hands it takes on a fierce, intoxicating drive, propelling the narrative forward with surprise and exuberance. Margo is selfish and needy and restless and nice, and she doesn't shy away from any of that. "Don't you think it's weird that we've just been sitting here without talking?" She asks at the dinner table of her husband. "I want to know what you'd do to me." She faces a handsome stranger in a café. 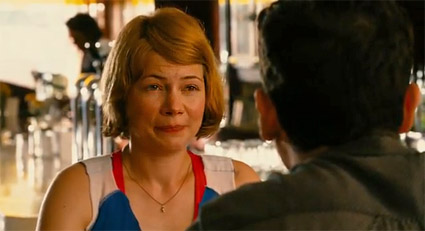 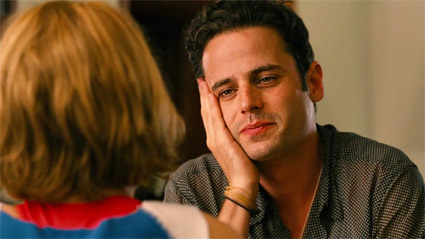 And we are all hovering in the in-betweens: between jobs, relationships, places, people. Even when we think we are being still, a change still lies ahead. It is inevitable: our lives lie on a continuum of time that is steadily, if unsurprisingly, moving forward, and as we try to hold on to what we want along the way, eventually some of them slip through our grasps and we learn to let go and move on and continue to hold our palms out right, ready to connect.

In her directorial debut "Away from Her," Ms. Polley displayed an astonishing instinct to observe life with uncanny perception and evoke epic revelations in quiet, startling moments - an ability reminiscent of the incomparable Alice Munro, who authored the short story that inspired the film. Here, Ms. Polley retained those qualities and infused them with a warmer palette and a more playful tone. The result is an equally masterful, if bolder look at relationships and our fears and desires to connect.

Supported by a solid cast, the film is full of memorable moments: a long term joke heartbreakingly cut short; an underwater dance that mirrors the one above ground; a montage sequence that elegantly illustrates the evolution of desire; and a conversation between Geraldine (Sarah Silverman) - Lou's sister - and Margo, where Geraldine imparts a line of wisdom that though obvious, cuts to the heart of the matter. 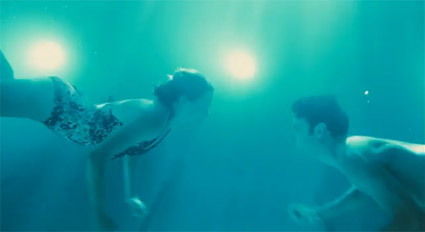 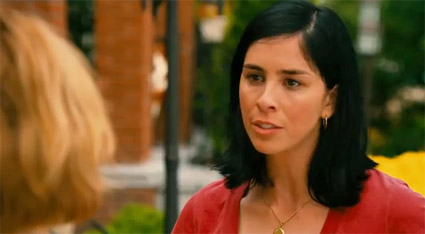 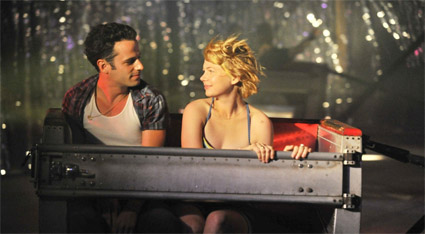 My favorite, however, is a striking scene where Daniel and Margo takes an amusement park ride that manages to portray, in two minutes, the meaning of a fleeting moment.

Indeed the film brims with a restless energy, oscillating gently between caution and abandon, vulnerability and cruelty, humor and humiliation, enveloped in the heat of Toronto summer which in its own right holds a similarly restless allure. Frozen eight months of the year, summer in Toronto is a precious and precarious thing, well aware by its partakers. Patios are open daily and nights are long. Girls in their summer dresses swish of sunny laughter. Everyone walks a little faster and laughs a little louder and everything feels a little headier, as if left un-drunk the heat would simply...sneak away. This head rush is further embellished by a glorious soundtrack of Canadian musicians, where Leonard Cohen's "Take This Waltz" seduces and Feist's cover of "Closing Time" all but breathes with the ballooning, uncompromising joy of living in the heat.

It needs to be noted that there is a point about 90 minutes into the film that could have been a perfect ending. For some, it would have been. For me, though enticing in ideals, it would have made for a lesser film. What arrives after both grounds the characters and elevates the film to something more than a fairy tale and moral lesson. What arrives after - all the expected and unexpected parts of it - give meaning to the choices made prior and perhaps, prepare us for what is to come.

As the film pulls to its last shot, and that familiar melody comes on, and the frame begins to move, I push my hair back, hold on to the handle bars, and am reminded of the idea of the in-between and how, despite all that it puts us through, how fucking beautiful that moment, fleeting as it may, can be.

GRACE WANG has a deep passion for cinema and writes related musings alongside poetry, short stories, and photography on her website, Etheriel Musings in addition to her Twitter site. She is one of Roger Ebert's Far Flung Correspondents and a regular contributor to The Spectators Arts Blog, and various online publications.

Next Article: The prom night from Hell Previous Article: We know what you'll be doing