Video essay: Was this Japanese film an inspiration for "The Hunger Games?"

Fantastical novels aimed at the young are making a killing these days. And due to the immense success of the "Harry Potter" and "Lord Of The Rings" movies, studios are looking for that next big series to cash in on. But among such film adaptations, rare is the one that finds a figurative truth worth sharing. Most of them are merely content to display the depths of their imaginations, being (perhaps justifiably) almost completely distant from the concerns of real life.

But one recent adaptation stands out. It's premise may sound familiar. A nation in ruins. Adults inflexible towards the young. Adolescents forced to fight to the death. No, this isn't the plot for "The Hunger Games," but from its predecessor and possible inspiration, the Japanese cult classic "Battle Royale," directed by Kinji Fukasaku, based on the novel by Koushun Takami.

Set in a dystopian timeline, the film tells us of Japan's collapse and massive unemployment. Its government has passed a law to reign in a restive student populace. Draconian is the mildest way to describe it, as teenage students are isolated and forced against their will to kill each other off until there is one left standing. All at the behest of a school teacher named Kitano, not surprisingly played by the iconic Takeshi Kitano, who at once embodies authority with a dangerous edge.

Students Shuya Nanahara and Noriko Nakagawa (played by Tatsuya Fujiwara and Aki Maeda) become the focal point of the movie, growing closer as they try to survive. They are presented as a romantic couple, but the movie does not exploit romance. Instead, it uses their pairing wisely, kindling our interest to gradually progress through the story's themes and suspense.

This same thoughtful characterization is lavished upon all the students. Though their high school personas and allegiances emerge, they are more archetypical than stereotypical. There is the beauty, the pariah, the sweet girl, the bad girl, the computer geek, the loner, and the hero, but these labels are not what solely defines them. The film is able to shape them as genuine individuals through their concerns and their relationships, despite their limited screen time.

The film is famous for its violence, achieving widespread fame in Asia after its release. It was not however screened in the US, in light of the Columbine shootings the year before. But despite its outlandish premise and bloodshed, its intentions go far beyond cheap thrills. The plot may be contrived but the drama is real.

We come to see the dynamics of student cliques; how crushes and betrayals affect their chances of survival. We see them rationalize each other's worth by juvenile standards. We see paranoia, vindictiveness, compassion, and a longing for acceptance. In the face of death, the story becomes a magnified reflection of adolescence and humanity. 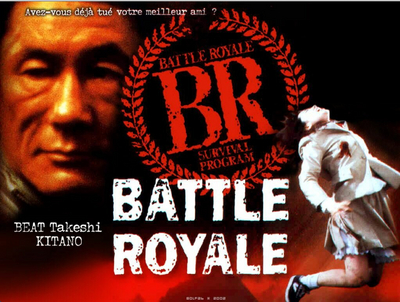 On an even deeper level, the film taps into the Japanese Generational Conflict better than any in recent memory. In a society where tradition and the past are held in utmost esteem, Japan's youth gets the short end of the stick. That rings true even today as young workers are left out at the expense of an older generation's vested interests, and distrust over government is high even in times of catastrophe. Kinji Fukasaku, a director known for films against Japanese post-war hypocrisy, once again uses a bleak canvas to rail against this cultural liability.

But the film doesn't simply portray adults as villains. They are also presented as influences and inspirations. Sprinkled throughout its story are students drawing upon their elders' teachings in order to survive. It's the link well worth remembering for both young and old.

It's remarkable that a movie with such potential for thoughtless tawdry thrills manages to say something about the human condition. "Battle Royale" is a very rare beast. An intensely violent fable aimed at a young audience, but with true feeling, intelligence, and respect. 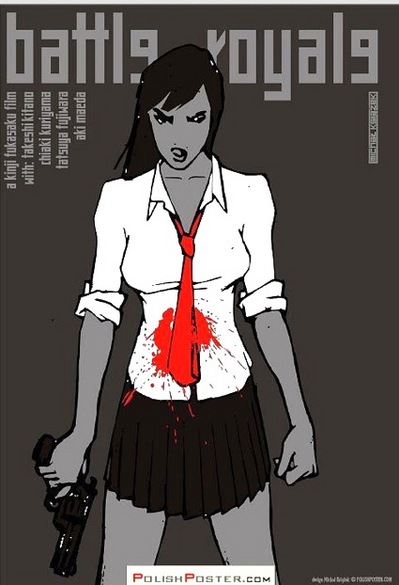