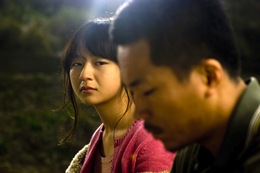 Sang-hoon is a terrifying piece of work. He is someone you never want to mess up with. He is callous, narrow-minded, vulgar and, above all very volatile. Whenever his hair-trigger fury erupts, there's more than hell to pay -- and that happens often.

Even when his temper relatively abates, he is still difficult and hostile to communicate with, probably even with himself. In the opening sequence, we see a young woman being beaten by some guy in the night streets. Sang-hoon appears and he savagely beats that guy. And then, he spits at her, smacks her, and insults her.

The main accomplishment of a small but powerful South Korean movie "Breathless" (2009) is making us absorbed in the story of such a repulsive hero like him from the beginning to the end (the original Korean title "Ddongpari" means "Dung Fly"). While we frequently cringe at his deeds, we come to understand him, and eventually have the moments of empathy to this aggressive soul full of irrepressible anger. And through him and others, we see a violent world where the fathers are the most horrible and virulent figures.

Considering his temper, Sang-hoon (Yang Ik-june) made a good career choice; he works as a hired goon and a debt collector under his boss Man-sik (Jung Man-shik). His jobs are sort of the ventilation for his aggressiveness, but, as we see in the movie, it does not seem to be good enough for his boiling anger inside him. He is so good and mindless at his work that Man-sik complains to him in one scene: "Any one of our boys hasn't been hit by you."

Not surprisingly, he does not care about people much. But there are some people surrounding Sang-hoon, and they have understood or accepted his nature. Man-sik is a longtime friend and partner, and he knows well about what makes his friend tick. Sang-hoon's insolent words and behaviors have become sort of mere grouchiness to him. The mood of their private moments is as sunny as grumpy old boys. Plus, Sang-hoon is necessary as an enforcer in his organization; they basically play a good boss and a bad top-lieutenant to their men, who don't have any love for Sang-hoon due to his relentless harassment. 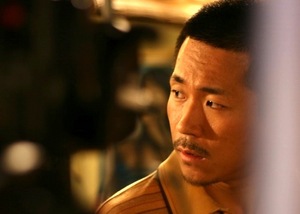 Sang-hoon's family members know what drives him too well. He has been exposed to the violence since he was young. He was helpless when his abusive father beat his mother. His young sister was accidently killed by their father when she tried to protect their mother from him. While young Sang-hoon was desperately taking her dying body to the hospital, their mother was killed by a car accident when hurriedly going after them. Recently having come out of jail, his father is now a helpless, guilt-ridden old man constantly beaten by his monstrous creation. Only benign and unharmed member of this shattered family is his half-sister, but she has recently left behind the abusive past with her ex-husband, which her young son remembers painfully.

On the surface, the movie tells us about the dark side of South Korean domestic lives affected by the violent society which have been in turn affected by its violent modern history. Some of internationally acclaimed Korean directors have reflected their past experiences with the violence from licensed bullies including fathers, teachers, senior students, and authorities in their movies. The director/writer Yang Ik-june is no exception, and he pulls no punches about his subject. He succeeds in punching the audiences with some direct, scathing lines in addition to the raw, gut-wrenching violence committed on the screen. "The fathers of this country are all f**ked-ups. He's a f**king fool, but when it comes to his family, he's Mr. Kim Il-sung" (Kim Il-sung is the former North Korean dictator, the father of current dictator Kim Jung-il).

The story and the characters are specific, but they have elements universal to the audiences outside South Korea. After all, the contagiousness of domestic violence is not an unfamiliar thing to all of us. Haven't we all heard from newspaper articles and TV news about how the abused becomes the abusers later, and about how this horrible cycle goes on and on? The movie reminded me of Paul Schrader's "Affliction," whose story is also about the transmittance of violence between the father and the son. Like James Coburn's character in that movie, the fathers of "Breathless" turn their sons into someone not so different from themselves. From the view of the movie, they are harmful carriers of the disease called violence. Is it coincidental that Man-sik, the gentlest male character in the movie, is an orphan? 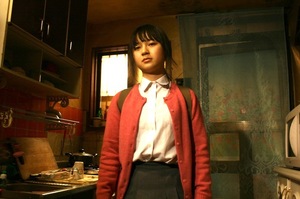 This is a despairing world where the characters can live neither with nor without the fathers from the beginning just because blood is thicker than water. While some are frustrated and tormented for not free from them, others desperately want them. Man-sik wishes he had a father, even if an abusive one. Sang-hoon's nephew needs his uncle as a father figure although terrified of him. Even with such intense hate toward his father, Sang-hoon cannot stop himself from making a certain choice at the crucial point in the story. But still, his father is someone he cannot live with, let alone forgive. Their past has already been full of scars too deep to be healed by such a simple act.

In amidst of all these, the glimmer of a new possibility is shown from an unlikely relationship between Sang-hoon and a high school girl named Yeon-hee (Kkobbi Kim). Their first encounter is unconventional. When they come across each other in an alley, Sang-hoon inadvertently spits on her clothes. She bluntly demands him to sort that out. She slaps him for his rudeness. He punches her in the face as a reflexive response. She faints, and he waits for her to awake. Talking about Meet Tough. 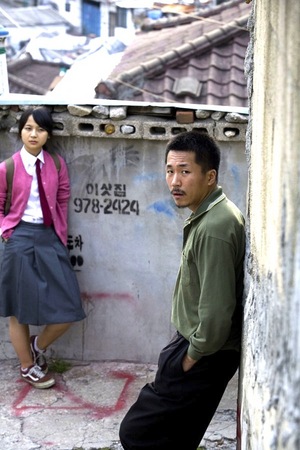 Why does a beauty like her want to hang around this beast? We come to learn early in the movie that it is more than liking a bad boy. Although she has some academic problems at her school, it's more peaceful for her to be there than being at home; her household is an emotional minefield as dangerous as Precious' home. Her schizophrenic war veteran father makes violent tantrums every evening. Her younger brother, who can be a younger version of Sang-hoon, threatens, insults, and extorts money from her every morning. Her mother died years ago, and Yeon-hee alone has to take care of her insufferable family who constantly trample on her feelings. As she has been struggling with the domestic violence daily like that, this feisty, tough-talking girl is neither shocked nor scared by Sang-hoon. Both sense some untold kinship between them, and they begin to hang around together after their first encounter.

Despite the easy rapport between them, they're more like two people with the wall between them. They don't tell much about themselves (While Yeon-hee pretends she's some affluent girl with lots of free time, Sang-hoon does not want to tell her about himself much), and don't even know about how their lives are interconnected in the past and at present. But they cling to the wall out of their need. There is a very moving scene with a quiet power where they meet at the riverside during late night after each of them has just undergone an emotionally draining incident. They start the conversation as if nothing much had happened, but both slowly perceive the exhaustion and angst from the other without letting them out. 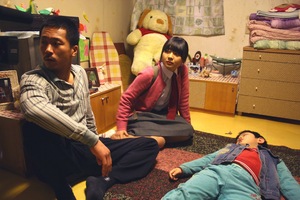 This is the first feature-length movie made by Yang Ik-june. It is both a labor of love and a therapy for him. He had a story he passionately wanted to talk, and he struggled to produce it with small crews on a shoestring budget. Although he did not talk much about his background and family in the interviews, we can clearly see his feelings that have been bottled up in his heart shaking the screen. It is so memorable and harrowing that, like any other stunning work that sometimes comes out from first-time directors, it made me instantly worry about his next feature in the future.

The power of the movie comes from brutal intimacy and striking verisimilitude. Throughout the movie, we get the authentic glimpse of the underbelly of Seoul; we see seedy alleys, squalid homes, and the lives of the lower class people mainly through the handheld camera. Shaky handheld camera used in independent movies now becomes sort of a cliché, but, in this case, the approach mostly works well. It's a little too much dizzy at first, and sometimes it's near claustrophobic at times, but Yang vividly captures the emotions of the characters even when the brutal violence is rampaging on the screen. The violence depicted in the movie are handled well while never losing the focus on the characters; we feel its influence on them at every frame. It's so emotionally close and savage that some moments are close to Bergman family drama on thuggish mode.

The movie is also fueled by lots of profanities in the screenplay. It actually can be a guideline for Korean profanities. As far as I remember, I have never been bombarded with Korean profanities so frequently and intensively like this one (Christopher Bourne from Bourne Cinema Conspiracy: "There are more verbal profanities per minute than any routine Andrew Dice Clay ever dreamt up"). Tough to hear, and also tough to see from the subtitle, but the dialogues are very effective, realistic, and sometimes humorous. The story and characters are solid, and Yang skillfully leads his plot to the resolution that we should have seen coming sooner or later from the beginning.

Yang is a good actor, and his lead performance is nothing short of electrifying without being showy. While never allowing his character to be sympathetic or ingratiating, Yang captures our attention by embodying an emotionally stunted man who slowly realizes what he has become (I want to assure you that Yang is a nice person in real life). Sang-hoon is not changed much in the end, but he learns few things within his limits. 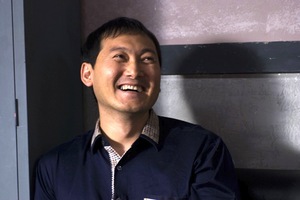 And Yang draws natural, well-rounded performances from other talented actors. Kkobbi Kim is not only a convincing high school girl but also an equal match for Yang from their first scene to their last. From her sensitive performance, we see a vulnerable but resilient girl with a strong will to endure every miserable day of hers while maintaining plucky attitude and the ability to love others. Jung Man-shik is a delightful supporting actor. His character could have been selected as "The employer of the month" if not for his occupation (he gives his men the money envelopes stamped with "Good job" as if he were an elementary school teacher).

"Breathless" is sometimes too gritty to watch for some, but it is emotionally rewarding as a whole. It has a bruised, volcanic heart beating and writhing and crying inside its gloominess and take-no-prisoner attitude. From a very unlikeable hero and his equally unpleasant deeds, we see the inner working of his mind as well as the sheer anger propelling his violence. And we're surprised to find ourselves caring about him as well as other characters. There are some brief, poetic interludes of peace from time to time in the movie. In them, we see some small possibilities inside these damaged people. However, there is a harsh reality they cannot easily escape. And the circle of violent life commences again.