Travelling with an unknown companion 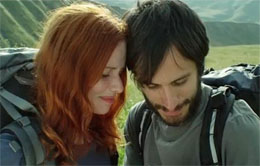 The deliberate omission of a film's plot point draws intrigue, anticipation, and dread toward its eventual reveal, but in "The Loneliest Planet," director Julia Loktev's terse, quixotic drama, that secretive center should rightly be the least emphasized aspect. Its narrative indeed hinges on a gesture best left discovered (although easily imagined), but it excels instead in exploring what shifts that crucial action represents. Etching into relief the mislaid assumptions on which relationships are founded and forgotten, there is a quiet, terrifying accuracy to Loktev's work - one without fanfare or supernatural copout - that reveals itself under the guise of expressionistic travelogue into the Georgian mountains.

Written by Loktev (who also directed 2006's "Day Night Day Night") and based loosely on Tim Bissell's novel "Expensive Trips Nowhere," the film's plot is left to a mere sketch: Weeks away from their wedding, 20-something couple Alex (Gael Garcia Bernal) and Nica (Hani Furstenburg) travel to the republic of Georgia together. As they wind through nearby towns and meet their people, they cling to a key phrase - "Didi madloba" - which they use on every encounter and circumstance. There's a familiar reason to anyone who has stumbled through another language. The saying emboldens a connection to foreign surroundings, suggesting an oblivious limitation while hinting at a grateful exit from any deeper conversation. Alex and Nica share the ignorance though, in what appears a healthy relationship, albeit one stripped of mystery: He keeps detailed track of her bodily functions, and later lovingly removes her tampon before having sex. These actions lend their dynamic a physical foundation, but instead of feeling a dramatic shorthand being established, there is simply the sight of a couple interacting naturally - a godsend away from the quirk-filled bonds that constitute most recent screen couplings. 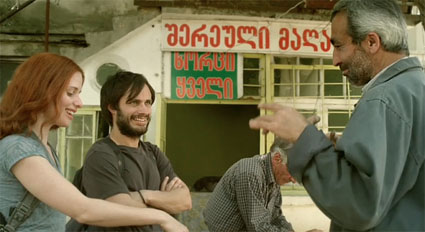 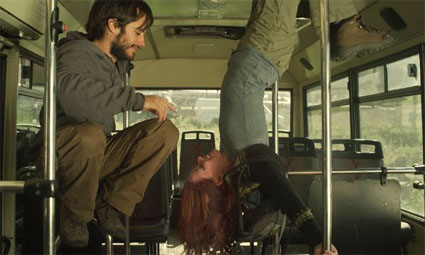 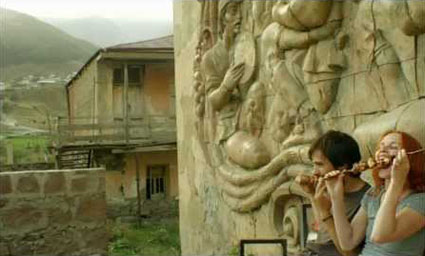 Gradually the two press to the outskirts of the Caucasas Mountains, and find a tour guide - Dato (Bidzina Gujabidze), perched on the edge of sociable and annoyed - who agrees to lead them within. Cinematographer Inti Briones is allowed her due in these ensuing passages, as long silences between the traveling trio leave her visual arrangements to convey the requisite wonder. Matched in splendor is the flickering blaze of Furstenburg's red hair, her slim figure centers the frame as well as the attention from the men accompanying her. Dato opts for entertaining magic tricks over informative duties, while the couple keep close with physical challenges and word games, but all quickly turns on its head once stationed alongside a river for a brief rest. A trio of armed Georgian men ambles by and stops them, and Alex's self-preservative actions sprung from this alters the trip's intention from enjoyment into apology, and connection into confusion that redefines his and Nica's relationship from then on. 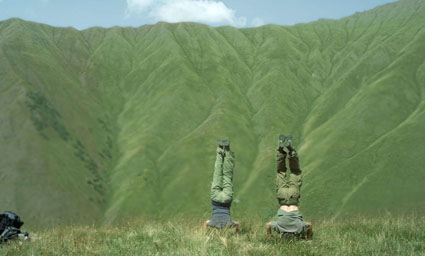 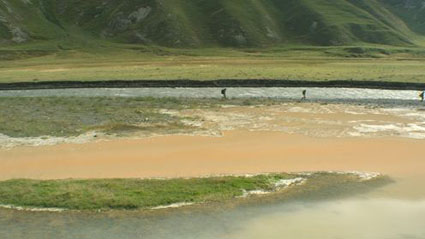 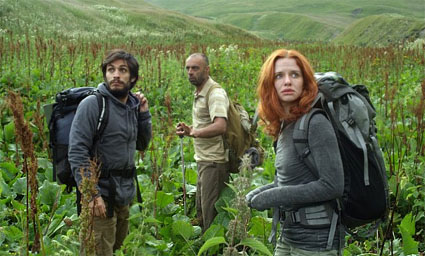 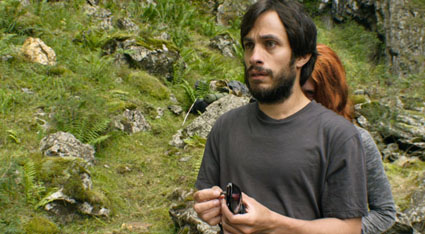 The central confrontation is brief, somewhat comical, and overly contrived, but Loktev finally reaches the stretch she's been waiting to tell, namely, the instinctive flaws between once-recognizable personalities turned complete enigmas. Emerging first as the fearless archetypes we want them to be, Alex and Nica now switch into surrogates that remind just how severe an emotional betrayal can be. Surrogacy by definition requires a matched substitution though, and in a film that puts forth little persuasion to instantly empathize with its characters, that journey may never fully materialize for some. If convinced of this shortcoming, the film will distance itself, as Loktev is confident enough in her material to slip away down a mountainside while the viewer looks elsewhere. But likely, even if just in a few moments, her difficult, closely perceived depiction of Alex's failings in Nica's eyes should strike a truth in behavior that's instantly recognizable. 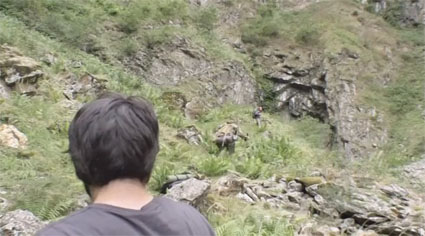 Seeds of this weakness in Alex are present even from the opening scenes; Early on, his and Nica's half-invested disco dance in town pulses with it, as Nica sways in Alex's arms, eyes shut, while his dart around the restless patrons glancing back. His actions are clear; his reasons for them are not. Were they of protection, and if so, what role did he envision himself taking? The Portuguese poet Fernando Pessoa spoke of denying a part in travel, claiming that in Madrid or China, "What would I be but in myself?" His quote speaks to travel's benefit of extracting the stifled self into new environments, and whether or not that interior block will actually submit. More so, it illuminates the fundamental conflicts in Alex and Nica's lives before their trip, and if there existed an unspoken one that they thought a change of scenery might fix. 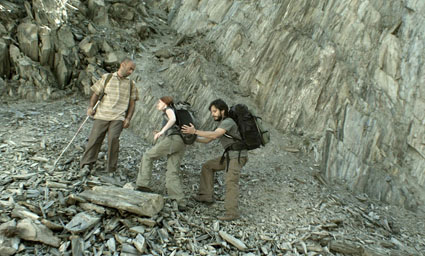 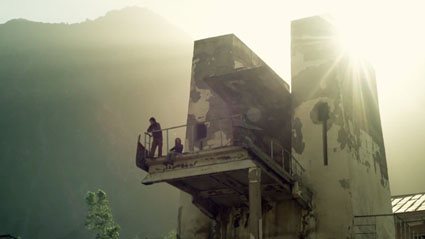 Repair sits beyond an option following the incident though, as Nica shifts into a sullen reserve while Alex, hands clasped in deference, trails softly behind her as the hike continues. They avoid any direct mentions to the event, and even make attempts to revive their old dynamic, but soon enough a pall of memory closes in to remind them once more. Bernal plays this ever-shifting emotional range wonderfully; it feels an understated showcase of the range, honesty, and fearlessness with which he consistently approaches a role. Meanwhile, his unspoken apologies toward Furstenburg's desertion reach an actress whose abilities handle them deftly. The Israeli-American beauty is in fact the key to the narrative, and special attention should be paid to the visual patterns surrounding her; whether it be Furstenburg's soaked, shivering body, or a flashlight's aid to her nighttime troubles, the tiny alterations in intimacy and allowance in both occurrences provide answers when the characters do not.

Again, Briones wonderfully transforms the natural environment in this latter half to match their psychological strain. Along with composer Richard Skelton's brief, beautiful waves of orchestral strings, she frames a recurrent series of landscape shots, which show alien rock formations playing host to the dark specks of Alex, Nica, and Dato in the distance. These transpire sporadically in the trek's opening stages, but later these moments carry a new weight: They are signifiers of space, of shifting alliances and emotional distance, letting the characters' new environment overwhelm them as they want nothing more than to escape from it. They also subtly establish the reconfigured relationships seen during the group's final campfire, a scene that finds Nica and Dato exchanging more dialogue than the rest of the film combined, but revealing, in Dato's case, a look into the deep pain behind his touristic duties.

Besides a potentially irreparable rift between two people, the film's central incident also produces a pair of cheap, black sunglasses, which Alex reluctantly keeps. He never brings them out again in front of Nica, but instead picks at them in secret, as though trying to scratch out answers. Thankfully, Loktev refrains from any rose-tinted perspectives through the glasses, but in a film replete with shattered expectations, it's a safe bet the pair denotes the new absence of them. They're his property now however, and if the couple ever returns home to their wedding, "The Loneliest Planet" makes us acutely interested to see if it proves a token of their lasting love, or an artifact of their relationship's demise.