Too much frosting, not enough cake 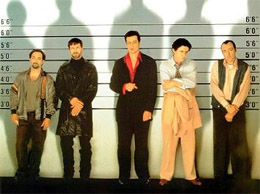 Is Bryan Singer's "The Usual Suspects" (1995) one of the greatest films ever made? I admit there was a time, right after I saw it, that it seemed special. For most of my first viewing, I thought I was watching a standard crime thriller when suddenly it caught me off-guard and left me stunned. Once the DVD came out, I rushed to buy it but then, as the years went by, I noticed it had been left on its shelf abandoned as I had little interest in watching it again. I couldn't remember much about the characters or the plot, in fact, there was only one thing that stuck in my mind about it. Readers who've previously watched it will instantly know what I'm taking about.

The Usual Suspects can be rented for $2.99 from Amazon Instant.

Some people clearly believe "The Usual Suspects" is great, a lot of them in fact. The Internet Movie Data Base ranks it as #25 in its Top 250 Movies, sandwiched right between the phenomenal "The Silence of the Lambs" (1991) and "Lord of the Rings: The Two Towers" (2002).  It was voted there by three hundred and fifty thousand users (a third of them gave it a solid 10) and has shown remarkable staying power. These facts are too remarkable to be ignored. There has to be a reason for its following.

As a rule of thumb (and in no small measure, thanks to films like this) I prefer not to declare a movie great until some time has passed after the first viewing. There have been several Oscar winners that I loved in their initial run, like "Rain Man" (1988) and "Dances with Wolves" (1990), but when they're shown on TV these days, I usually change channels (not that there is anything wrong with them). There's a reason why the Catholic Church establishes a waiting period before declaring sainthood for any man. That same law should apply to viewers or critics who wish to bestow the title of "Great Movie" on a recent entry. Time has a way of putting these things into perspective.

"The Usual Suspects" tells the story of a group of crooks who are rounded up by the N.Y. Police Department when a hijacking takes place. They are Fred Fenster (Benicio del Toro), Tod Hockney (Kevin Pollack), Michael McManus (Stepehen Baldwin), Dean Keaton (Gabriel Byrne) and Verbal Kint (Kevin Spacey). The cops are well aware of their innocence but their hope is they might feel compelled to rat on each other anyway.

Once freed, these men come together and take their revenge by setting a caper that exposes the corruption behind the Department. Things work so well, they move to Los Angeles and continue collaborating until they're all unexpectedly recruited by the mysterious Mr. Kobayashi (Pete Postlethwaite), the assistant to legendary criminal Keyzer Söze. They are then forced to participate on a suicide mission that lives up to its title. The lone survivor is left to tell their story to Agent Dave Kujan (Chazz Palminteri), and to us, in flashback.

The works of Michael Mann have set the standard for recent movies that involve elaborate heists. Asides from this similarity, they don't have much in common with "The Usual Suspects." While Mann's characters seem taken directly from the streets of real-life, you won't catch anybody acting like regular people in "Suspects." Singer invariably chooses what looks better cinematically over what feels real, regardless of how little sense it makes.

There are a couple of scenes that perfectly illustrate his style. Early on we see a dying character in agonizing pain attempting to blow up a ship, but not before lighting a cigarette with the same match. Later on there's a sequence where the Baldwin character shoots two of Kobayashi's men from the top of an elevator and their brains/blood are splattered all over a glass wall, while missing their boss completely (these bullets are more magical than any Kevin Costner ever got to scrutinize in "JFK"). Still, taking some liberties is a common and valid approach to filmmaking (realism doesn't' necessarily equate with greatness). That's just the kind of movie this is.

The real weaknesses in "The Usual Suspects" are the suspects themselves. The Gabriel Byrne character has the typical back-ground story of the ex-con in love, unable to leave a life of crime. As formulaic as this may sound, at least it helps us care a little about him and his girlfriend (played by Suzy Amis). The rest of the men use cool, colorful and utter witty one-liners but they are nothing more than two dimensional plot resources. Their irrelevance is the main reason why the movie itself becomes forgettable.

Regarding Keyzer, the audience is supposed to feel terror at the mere sound of his name, based on the awe that others convey when discussing him. Still, I have my doubts that anybody who kills his wife and children just to make an impression on his enemies would be compelled to come up with such an elaborate story for law-enforcers (especially since he had been awarded total immunity). If he's as ruthless, powerful and all-knowing as they claim, why would he care to give such a dramatic performance to the Palmintieri character? The only practical purpose behind this charade is allowing Spacey to display his considerable acting range. The only imaginable explanation is that his character is in dire need of an audience.

Our first impression of "The Usual Suspects" is radically altered by further viewings. Verbal's ingenuity in fabricating an (unknown) portion of his narration seems amazing at first, until we come to wonder what he possibly had to gain by substituting the names of its secondary players. All the talk about Guatemala beans and Illinois Quartets adds showy content to his performance but has no relevance to the plot. The flashbacks depict several variations to the real events but the film never commits to any single one of them. That makes it easy for Singer to fit in the surprise ending of his choice but I don't think he's playing fair with the audience by doing so.

Did Verbal invent the rest of the characters in his story as well? After several viewings, I'm still not sure of the answer one way or the other. One moment it is implied that the Keaton character died long ago, the next he's described by Palmintieri as someone completely different from the man we see onscreen. If we cared little about the film's characters to begin with, what possible good could come from learning they may be figments of Verbal's imagination?

When the first "Mission: Impossible" (1996) came out, some audiences complained about the confusion caused by DePalma re-enacting alternative possibilities to the events of its initial caper (in a two minute scene). Singer does the exact same thing repeatedly over a two hour period, without ever pledging to a definite version.

"The Usual Suspects" isn't terrible by any means (any film with Pete Postlethwaite can't be all bad). The heist scenes are exciting and the story involving. It's certainly fun trying to figure out how exactly we got conned along the way. The movie wasn't particularly successful when it came out; it was word of mouth that provided its share of followers. I wonder if those who cared to watch it again still feel the way they initially did; personally, I simply find it over-rated. The picture has tons of frosting but very little cake; it pretends to be much smarter than it really is.

"The Usual Suspects" aims to provide a memorable twist ending in the tradition of renowned features like "Fight Club" (1999) and "The Sixth Sense" (1999). The latter made the audience see things from a completely different perspective but still managed to make perfect sense. More importantly, after thoroughly scrutinizing it from every possible point of view, it held water and we bought it completely. That's not the case with "Suspects."

I admit I've had problems in the past with the conclusions to other prestigious films such as "Black Swan" (2010) and "Shutter Island" (2010). Both asked audiences to accept that most of the events they've spent two hours following were a mere subconscious fabrication by the leads due to pressure-filled situations (as S&E used to say, I hate it when that happens!). At least they put their cards on the table and left it to the audience to judge them for what they were.

On the other hand, the ending of "Usual Suspects" is just a smokescreen that fits its story only by being vague about the facts. It feels like writer Christopher McQuarrie and director Singer first came up with the surprise and then developed a plot around it. The greatest trick they ever played was convincing three hundred and fifty thousand IMDb voters otherwise.