Thirtieth Anniversary of "A View to a Kill"

Thirty years have passed since the release of the 14th James Bond film “A View to a Kill”, and it remains uncontested as the worst entry in the series. It’s not that the picture is devoid of any interest. On the contrary, it represents a curiosity of sorts among the Bonds. “View” has one of the series’ great title songs (by Duran Duran), it was filmed in some of the best locales imaginable (Paris, San Francisco), it was the first featuring an Academy Award winner (Chirstopher Walken), and yet, it is also the one where someone thought it would be a good idea to spice up a snowy chase scene with The Beach Boys’ “California Girls”. Since that summer of 1985 when “A View to a Kill” came out, there certainly have been Bonds with lesser villains and plots (“Quantum of Solace”), others that were far more outrageous (“Die Another Day”) and even some that were not as visually attractive (“License to Kill”), but the key to “View” remaining alone at the bottom of the 007 canon is how terribly it scores in just about every category used to measure these films.

“A View to a Kill” deals with James Bond (Roger Moore) and his efforts to stop psychopath Max Zorin (Christopher Walken), from implementing “Operation Main Strike”, a plan that is similar in name to Auric Goldfinger’s “Operation Grand Slam” but not quite as intriguing in nature. Zorin, the product of a macabre WWII genetic experiment, is yet another bleached blond Bond foe in the tradition of Robert Shaw. His scheme involves the flooding of Silicon Valley in order to take over the microchip industry alongside the mighty and mysterious May Day (Grace Jones), a woman of few words and murky intentions.

“View” is one of those features that never get off the ground, something unprecedented in the James Bond series. If there is such a thing as a pulse in movies, there are sections of this one where a defibrillator would come in handy. This is not due to a lack of action scenes but those included are strung together with long, slow stretches. The pre-title one is perhaps the worst since those became a tradition in “From Russia with Love”. It starts intriguingly on a serious note when 007 finds the frozen body of a fellow agent in Iceland, but on the turn of a dime it derails into a senseless stunt-show of sorts, well beyond the physical capabilities of the film’s protagonist. More than a chase sequence, this one has the feel of a “Home Alone” clip, with the mischievous hero pulling all sorts of pranks on his clumsy pursuers and escaping in a cheesy iceberg-like boat that’s even less believable than the crocodile submarine from “Octopussy” (1983).

Later action sequences fare much better but they all have more than the usual share of the silliness that prevailed during the Moore era. Take for instance May Day’s jump from the Eiffel Tower and Bond’s subsequent pursuit by plunging on top of an elevator. This is an exciting scene though somebody conveniently forgot that: A) It would actually take 007 two elevators to get to the bottom floor, by which time the villainess would surely be long gone, and B) Hopping from the top of a structure of such shape would have the paratrooper crashing against the structure sooner than later (it’d be like jumping from one of Egypt’s pyramids and hoping not to hit anything on the way to the ground).

There’s also a fairly good duel on horseback between Bond, Zorin and the latter’s thugs but it’s hard to imagine that 007’s plan to elude them by climbing on his Rolls Royce could have ever worked, considering that the vehicle looks as heavy a tank (even if May Day is later able to push it all the way to the middle of a large lake). Then there’s a rather amazing chase in San Francisco with Bond hanging from a fire truck’s loose stair but the direst consequences of failing would have been getting arrested by the clumsiest of police forces. And considering the way these guys drive, they don’t seem to have the necessary eye-hand coordination to handcuff him in the first place. Very little suspense is generated here in what’s just stunt work for stunt work’s sake. 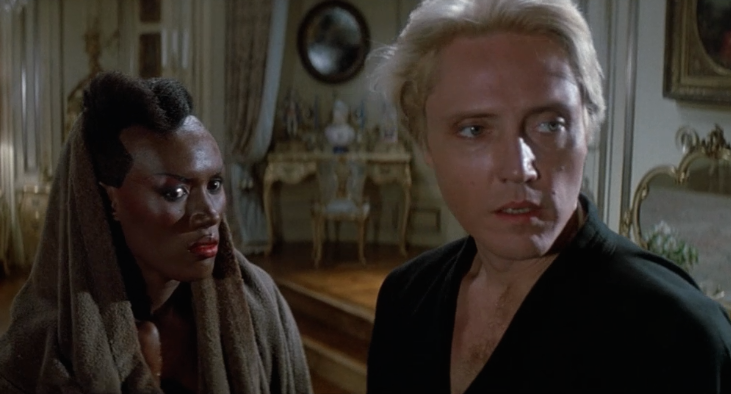 Despite Christopher Walken’s remarkable talents, his character here isn’t all that memorable. Like many of his predecessors, the actor tried to base his performance on grandiose poses and an evil cackle rather than in any kind of character development, but this just doesn’t fit his persona (even his Max Schrek from “Batman Returns” had more layers to him). Jones’ May Day makes for a very strong screen presence but her feline disposition is more bizarre than anything else and the scene where she’s betrayed by Zorin and turns to the good side might have fared better if she hadn’t spent a good deal of the movie cheerfully murdering innocents. The scene where she finally sees the light is about as convincing as Jaws' in “Moonraker”. One could assume May Day’s shortcomings derive from her character’s silent approach, but that didn’t stop Oddjob from becoming one of the prime Bond henchmen with the simple uttering of a few “aaaahhhs” in “Goldfinger”(1964), the greatest Bond ever.

If the movie has one fatal flaw, that has to be the casting of its two main leads. Most of Roger Moore’s Bonds have a great deal of entertainment value and there’s no doubt that his success in the role (taking over for the seemingly irreplaceable Connery) is one of the main reasons why the series has lasted until today, but at 57 he looked 2-3 movies too old to keep playing 007. By then, he didn’t much resemble his own likeness from the gun barrel sequence anymore (as taken a decade earlier). It may be normal to wonder whether the action we are watching on screen is being executed either by the actor or by a stuntman, but when we find ourselves doing it while the character is doing such trivial things as climbing up a flight the stairs, then there’s definitely cause for concern (at least by this point they could dye Moore’s hair and that of his stunt doubles’ in the same color tone, making it harder to tell them apart). When it came to his very young female costars, it had become somewhat odd to see them in bed together and when the same happened with the ferocious May Day, one had to fear for his well-being. It’s a shame that both Pierce Brosnan (“Die Another Die”) and Moore retired from the role with their very worst efforts, leading many audiences to forget that both had already made more than their share of good Bonds.

Nowadays we often see characters being cast with young actors as to make teenage audiences identify, but this clearly wasn’t the case with “View”. The early sequence when the MI6 team takes a trip to the horse track looks just like a day out at the retirement home and Bond’s partnership with Tibet (Patrick Macnee) can’t precisely be called dynamic. The scene where they fool their eavesdroppers by playing a recording of their bickering while they continue their conversation on a balcony (in front of dozens) is another example of the prevailing sloppy filmmaking. There’s also little chemistry between Moore and Stacey Sutton (the Tanya Roberts character). Through the years it has become a cliché for the latest Bond girl to claim that her character is an equal to Bond’s but that’s just not the case here with one of the weakest female leads in the series. Stacey is basically a damsel in distress who’s mostly limited to warning Bond of coming dangers and screaming for help, which makes it hard for her to sound convincing when trying to pass as a genius geologist, even if it is one who doesn’t spot a giant blimp sneaking up on her. I suspect that her co-star Alison Doody (who later became the female lead in the third Indiana Jones movie) would have been a much better choice for the role.

Overall, there’s not much in “A View to a Kill” that resembles Ian Fleming's creation. Q’s most recent invention is a cat-like robot used to infiltrate Stacey’s home. In reality, he could have simply walked inside and looked for himself. Besides, the cybernetic feline clearly wasn’t designed to climb stairs and looks about as practical as Paulie’s butler in “Rocky IV”. At any rate, as much as I complain here, as an entry in the James Bond series, I’ve watched “View” countless times; each one with the renewed hope that eventually it will improve with age (no such luck so far). Curiously enough, in a recent IMDb poll of people's favorite 007 movies,“View” came next to last but still managed to score a few votes as the best entry in the series (it gathered only a couple less than the vastly superior “Octopussy”). I recall that in the very last Outguess Ebert contest, the sole winner named “A View to a Kill” not only as his favorite Bond entry but also among his favorite all-time films. This only serves to prove what Dean Martin once sang about everybody loving somebody sometime.