Is Frank Darabont's "The Shawshank Redemption" the best motion-picture of all time? According to Internet Movie Database users, that is exactly the case. The advent of the internet likely brought together the largest congregation of movie fans in history, ready to express their opinions in the most accessed movie data base ever, and the best rated film there is "The Shawshank Redemption."

This isn't something to take lightly, true, but there are peculiarities about the website's data that needs to be considered. If you've followed their rankings in the past you may have noticed that the response by users to recently released films tends to be more extreme than that of older ones, in other words, a recent good movie might initially appear with a higher rating and a bad one with a lower one; films only seem to reach their rightful place with the passage of time and particularly with the accumulation of a larger number of votes. Their opening weekend is not the most accurate of moments to evaluate what audiences really think about them.

At any rate, "Shawshank" is 16 years old and apparently has received more votes than just about any other top 250 movie which means its #1 rating can not be considered a fluke. This is especially odd when you consider not many people saw it when it first opened in theaters so the great majority of its very large audience comes from home video.

We can start by saying this is indeed a great film, one which has provided sentences to our daily conversations ("get busy living or get busy dying", "you've become institutionalized", "aaaand felt like free men") and our daily doings are often compared with those of the characters depicted here. For me, "The Shawshank Redemption" is also one of those memorable films that I can recall the exact circumstances under which I first saw it: some sixteen years ago; at a theater with my (then) girlfriend, a couple of weeks before we got married, that same morning I had left a job I greatly disliked and which was a source of great stress for me, which meant that when I saw Tim Robbins kneeled under that night storm, I badly wanted to join suit. Some of life's most beautiful memories derive from these types of moments. 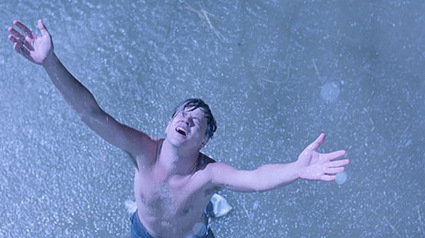 Yet if you want to suggest any one movie is the very best of all time, you have to thoroughly scrutinize it; you have to play the role of the devil's advocate. By the end of the day you are bound to come up with apples and oranges but this shouldn't stop us from giving this endeavor a try.

For starters, one can't ignore the fact that a relative low number of younger audiences have actually watched the old greats like "Casablanca," "Citizen Kane," or "The Third Man"--movies that only have a fraction of the votes "Shawshank" does, in part because many movie-watchers seem to have a "what's new?" attitude, in part because some people just don't seem to enjoy black & white films. This means that the #1 spot in the IMDB rankings was likely to go to a relatively new, color film to begin with. 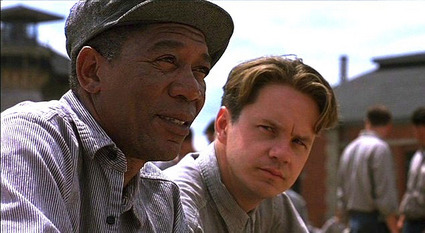 What's best and most unusual about "The Shawshank Redemption" is how difficult a film it is to accurately be described. At first it seems to be mainly about the horrors of prison, then it becomes one about a friendship, later on it is about man's dependency on the walls that incarcerate him, further on about hope and despair and finally, two hours into it, we discover we are actually watching an escape movie, something that by that point was the furthest thing from my mind despite being well aware that the literal translation of its Spanish title is "Dreams of Escape." I also believe "Shawshank" came dangerously close to turning into a complete downer, much like "Midnight Express," but part of the greatness about it is that it managed to end up as exactly the opposite. 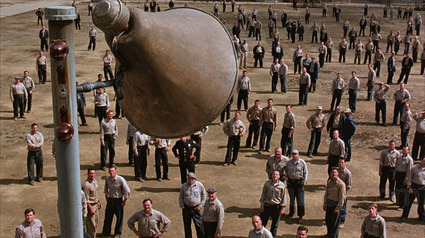 In both examples we meet several characters who are beaten up, humiliated and raped, yet "Shawshank" is undeniably an uplifting movie, helped immensely by that most affecting Morgan Freeman narration (which came at a time before those started to feel tired and overused by his narrations in so many other features). It's not easy to find a film in which these scenes of horror can be found right alongside some truly beautiful, elevating ones as when the Mozart opera is played on the speaker system. That involves (oddly enough) mostly grown, unappealing listeners and yet, save for a few exceptions (the so-called "sisters") the majority of them are depicted as far from being evil but rather as people who simply messed up things at some point in their lives and find themselves amazed at still being able to be moved by something so foreign to their sad realities.

There are a few faults to "Shawshank." I think its villains are more than a bit cartoony, especially the warden played Bob Gunton, a specific casting that frequency and the years have effectively turned into a cliché. It's also hard to believe that for over two decades none of these evil doers were ever transferred to another prison or position (Brooks casually mentions this is his sixth warden in 50 years). The film has several other contrivances that become all the more noticeable with repeated viewings. For example, for such a brilliant character as Dufresene it seems naïve to both take his plea of innocence to the no-good warden instead of his lawyer and to ignore the fact that his knowledge of that character's dirty deals all but guaranteed he would never leave the prison alive. 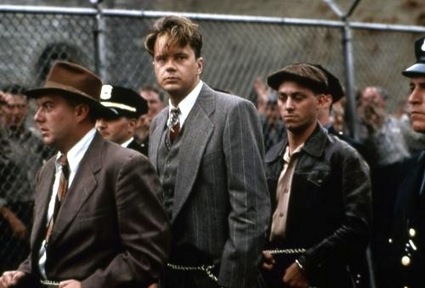 Additionally, for him to successfully dig his way out of the place, he had to count on too many unlikely events such as never being switched from one cell to another in the span of many years, and the presence of thunder to hide all the noise he would have to make. Finally and without claiming to understand the architecture of the place, it seems to me that (a) a large drainage pipe would not likely lead to a clean river and (b) one would dig a tunnel in the ground, not behind the wall of a second level cell.

I also have to question the veracity of the claim that Mexicans believe "the Pacific Ocean has no memory" but I can understand this line's contribution to the dramatic effect of the film, aside from being a terrific one to begin with. 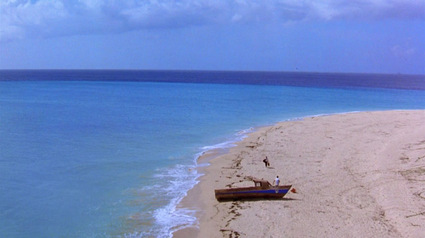 I don't think it's too difficult to understand people's affection for "Shawshank." Few films have ever managed to allow its characters (and audience) to hit rock-bottom in their later stages only to effectively convince them that such a surprising, beautiful and happy ending could indeed be possible. Years ago, I can remember Siskel & Ebert trying to find the reason behind the film's poor theatrical box office and suggesting the possibility that the picture's name was the culprit; this might have been the case then but time has only served to turn this weakness into a strength. In my experience, finding someone who dislikes "Shawshank" is as difficult as learning of one who loved "Gigli." In the year 1994 that gave us the great "Pulp Fiction," "Forrest Gump" and "The Shawshank Redemption," the latter just so happens to be the one I have the most affection for.

After all of this has been said the question still remains: Is "The Shawshank Redemption" the best movie of all time? The answer is no, not really, this is not a particularly ground-breaking or flawless film. Can any one, single motion picture be called the best ever? I don't think so, unless we disregard the possibility that diverse tastes among audiences and critics can exist. How relevant are these conclusions in the grand scope of cinema's history? Not too much. If Shawshank's IMDB rating tells us anything it's that maybe, in general terms, its outstanding virtues plus some external factors have resulted in it meaning more to a larger number of present day movie-goers than just about any other motion-picture. I'm pretty sure Darabont, Robbins and Freeman can live with this.