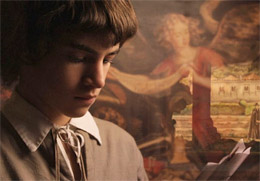 A young boy curious about his birth. A priest with the long past behind him. A countess who gets involved in a doomed affair and then trapped in an unhappy marriage. A count who commits cruelty out of frustrated love. A criminal who accidentally gets the chance of lifetime to change his social status. A vengeful society woman who manipulates others to anger the man she is obsessed with. They might look like the characters randomly selected from several different books, but they are all the denizens of one labyrinthine tale which slowly reveals how their lives are intertwined with each other more than we thought at first.

Raúl Ruiz's gorgeous period drama "Mysteries of Lisbon" (2010), based on the 19th Portuguese novel with the same name by Camilo Castelo Branco, has a lot of space for handling such a complex plot. Many things are told throughout its long running time (272 minutes), and it is easy to get lost and confused, but it is also a pleasure to watch how the plot thickens to unfold the stories and the secrets behind them. This is like reading a big book full of interesting things; there is one story at the beginning, and then there are other interesting stories coming from inside and outside. When its first half was over, I wanted more while tickled by other possibilities ("Another secret?" - "You'll get your answers later"), and then I was very satisfied with its second half.

The story is initiated with a 14-year-old boy in Lisbon who knows nothing about his parents. Unlike his classmates, João (João Luís Arrais) does not have a surname, and we see him teased by the classmates in his boarding school because of that. He has been raised and taught by generous Father Dinis (Adriano Luz), who has not told anything to João though he seems to knows a lot about the boy's parents. 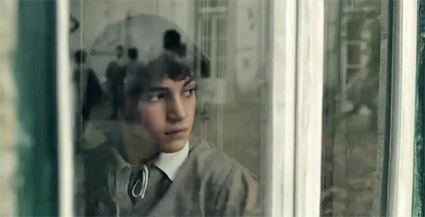 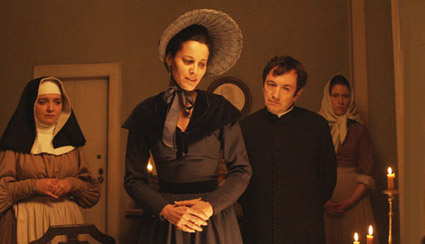 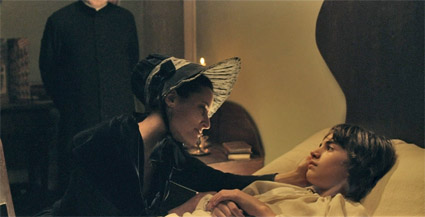 On one day, an incident becomes a key to unraveling the mystery. João suddenly gets ill, and he sees a beautiful lady visiting him on sickbed in his fevered haze. It was not a hallucination, because he finds her gift, a miniature theater, on the table when he regains his consciousness the next morning. Not long after that, Father Dinis takes him to a big manor, and João gradually learns that he is the illegitimate son of the Countess of Santa Bárbara (Maria João Bastos), who has been treated badly by her cruel husband the Count of Santa Bárbara (Albano Jerónimo) in their loveless marriage. After meeting her son again, the countess finally decides to get away from her husband - and she later tells João the story about her ill-fated romance in the past. 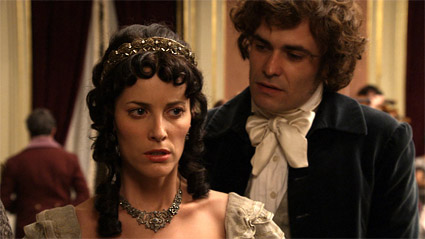 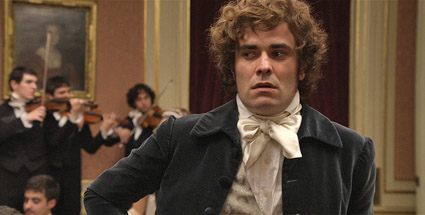 And that is just a mere start for the series of stories to be unfolded before our dazzled (or disoriented) eyes. Some of them casually appear and then disappear forever while the others exit and then appear again with some surprises. For instance, a certain character seemingly looks like one of the background characters in one scene during the first half, but he comes back in the second half with a big secret involving the birth of a main character.

Speaking of the "secret behind a birth," which persistently has remained as one of major clichés in many TV soap dramas, we can say that "Mysteries of Lisbon" is stuffed with soap drama materials like that. When we see young lovers' romance blocked by the customs of their high society, we know that, propelled by lust and passion between them, they are destined for the melodramatic tragedy waiting for them from the start. Most of the characters depicted in the film are as thick as the cardboard figures in the miniature theater, and the movie constantly emphasizes that aspect to us by introducing several scenes through that miniature theater belonging to João. 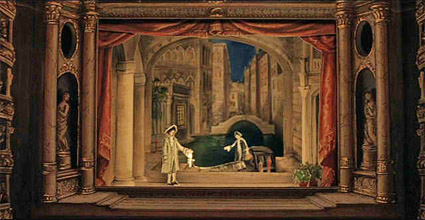 But they are the vivid fragments mirroring our nature, and how they and their stories are deftly handled in the movie reminds me of the works of the 19th European novelists, who usually chronicled the life of their heroes from the beginning to the end as the stage filled by broad but colorful characters. I am not familiar with the works of Camilo Castelo Branco (despite his impressive bibliography, his novels have not been introduced to US, let alone South Korea), but I recall Dickens' classic novels and how he confidently manipulated his wonderful stories with many clichés including implausible coincidences as he juggled memorable caricatures. You will probably not remember every character in the movie, but you will certainly remember the more colorful ones such as Alberto de Magalhães (Ricardo Pereira), a shady rich man with many secrets in his past--including the connection with João a long time ago--and Elisa de Montfort (Clotilde Hesme), an obsessive and cunning woman who behaves as if she were the heroine of the 19th century version of "Fatal Attraction"(don't worry, the people in this era are too sophisticated to boil a rabbit). 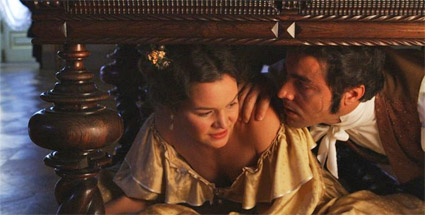 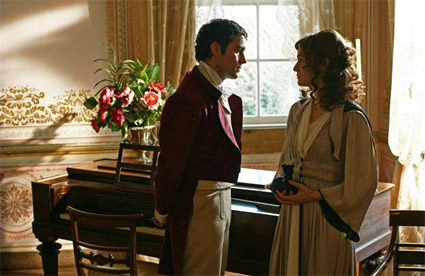 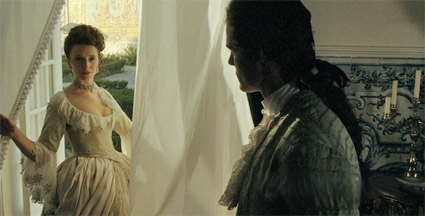 It goes without saying that the most interesting character in the film is Father Dinis, who harbors his own secrets and those of others behind his restrained attitude and plain appearance. As it turns out that he is connected with most of the characters in the story in one way or others like Mr. Jaggers in "Great Expectations," he gradually becomes an omnipresent figure hovering over the other characters while being drawn to hidden facts in his life. 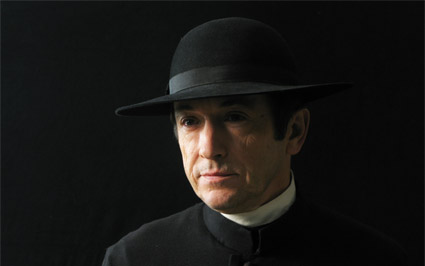 We naturally become very curious about this ubiquitous man, and then we get an ominous scene where João goes into a forbidden room out of curiosity and faces his benevolent teacher's interesting past represented by his alter egos in the room. The camera calmly looks around the room, and it subtly implies that there are more hidden things in Father Dinis' past and we will see some of them later. 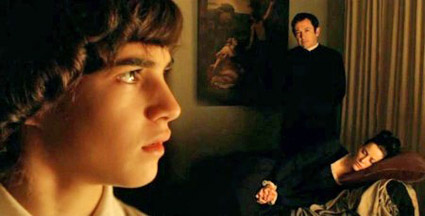 Although he made more than 100 films before his death while admired as one of the most interesting and innovative filmmakers in the world, the director Raúl Ruiz (1941-2011) was not well known to South Korean audiences including me around the time when I became a little more serious about movies. Before watching "Mysteries of Lisbon," one of his last works, I only saw "Klimt" (2006), and that movie was not a pleasant experience. Although I liked John Malkovich's sardonic lead performance as Gustav Klimt (I fondly remember the scene where he smashes a piece of cake onto his opponent's face), I could not relate well to the movie due to a lack of focus. I remember I sarcastically quoted the lyric of a Broadway musical number when I talked about that movie at that time, and I still think it summarizes the movie pretty well: "I'm drowning, I'm drowning here! I'm going down for the last time. I see my whole life flashing before my eyes!"

In case of "Mysteries of Lisbon," though I needed the second viewing to completely sort out the relationships between the main characters as well as their plot-lines, I was rarely bored in spite of some confusion. The main storyline is frequently interrupted by flashbacks, but there is a sense of fun whenever the movie slips into the past to tell another story. There is also a wry dark humor, and it mostly comes from the people who rigidly behave according to the codes in their society. The sense of honor turns out to be nothing but superficial in front of a man who does not give a damn about it in one comical moment. The women are so admired in their society that the men unwisely think they can own their hearts, and that always becomes the source of misery in the end. The Count is not a bad man but a pitiful man who makes himself more miserable by making others around him miserable. 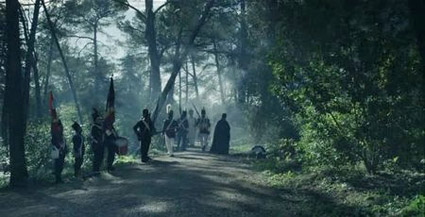 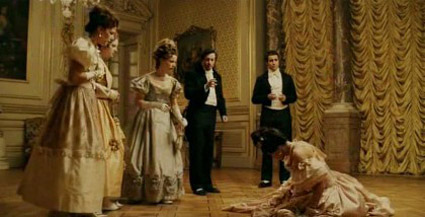 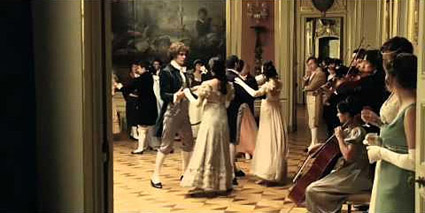 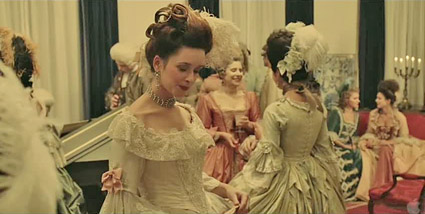 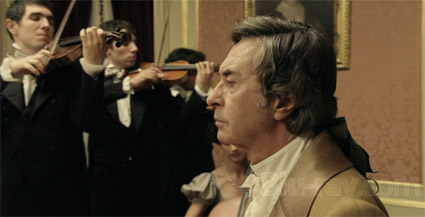 The movie is visually compelling thanks to Ruiz's masterful direction. The production design and costumes are excellent, and the cinematographer André Szankowsk's camera lingers or slowly moves around during many long takes to immerse us into the high society world where eyes and ears are everywhere around its members. There is always the gossip shared behind their backs during social gatherings, and, even when it looks like a private conversation between two people, there is usually someone outside the room, a servant or a maid, silently serving them while hearing and observing everything. 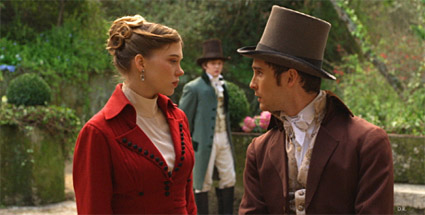 The movie is playful about that aspect. At one moment, the camera looks at two characters in the bedroom while moving as if it were an observer hiding behind the curtains. I especially liked an odd shot in one scene, which shows many people intently looking upon a certain character's behavior at the ground floor from upstairs (but I am not sure about what they can come to know from doing that). 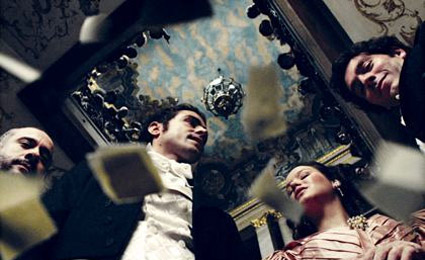 As we enjoy the plot, it grows on and on. When João (now he is played by Afonso Pimentel) later returns to Lisbon as a young nobleman with a personal agenda fueled by his naive passion, he only finds his life as a mere addition to the vast intricate tapestry he has not been aware of. Time has passed as he wanders due to his discouragement followed by a big revelation. He becomes older and weaker as the time goes by. Marcel Proust would understand very well how João feels about the time lost and what he tries to do in the end before it is too late for him.

"Mysteries of Lisbon" is a sumptuous visual ride if you prepare yourself for its long but tantalizing tale. Compared to the epic panorama of stories it has built, its finale may be relatively anti-climactic or disappointing to some of you, but at least it can make you look back what you have seen from the movie and reflect on it for a while. Come to think of it, it brings to my mind that, no matter how vastly it is unfolded, every story inevitably arrives at the point where it has to get resolved and finished - and folded back to its origin.