Attending the latest James Bond films has been a tradition in my family ever since I can remember, and why not? If anybody went to the movies as often as we did, they were bound to get plenty of "B" grade turkeys, yet the years made clear that just about any 007 film would have something more to offer than most, at the very least those terrific production values.

The first one I can recall going to was "Goldfinger" sometime around age 9, to one of those theatrical re-re-releases which were so common before the days of multiplexes and home video. I have to admit that what really motivated me to go see it back then was solely the possibility of being witness to the cinematic version of my old Corgi Aston Martin DB5 model car but, like most audiences, I found many facets which I had become familiar with, in other movies, being taken to a whole new level.

There was ingenuity and charm in every detail: the pristine white tux under the wet-suit, the red carnation to top it; the betraying dancer giving away her partner in crime's position to Bond by way of her eye's reflection; the bar of gold which diverted the villain's golf ball from hole 17 (a physical absurdity of course, but who cares?): the sweet old, courteous lady who happens to shoot one mean machine gun. "Goldfinger" had a memorable surprise, big and small, in just about every detail, in most every line of its dialogue, an unprecedented sense of an action film having all this fun with itself. 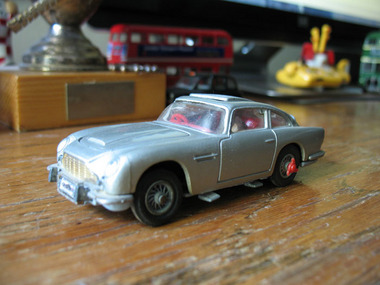 The Bond formula is known for the standard elements that appear in each and every one of them, almost religiously. Many of its main ones made their first appearance in "Goldfinger," and went onto become so common-place, it's hard to believe any suspense could be extracted from them over and over:

• The sacrificial lamb (sometimes a femme-fatale, who at first sight erroneously appears to be the feature's Bond girl) who is killed by the villain, fueling Bond's (and the audience's) animosity towards him;

• The henchman with some remarkable peculiarity and the imposing presence needed to make up for the fact their bosses were always evil geniuses but not necessarily joined with skilled bodies;

• Bond's complete knowledge of absolutely every subject matter ever known to man, be it a random general topic or that of those important good things in life that he specially loves, never mind the fact that surely few people in history have ever bothered to learn how many years gold will stay radioactive if a bomb goes off alongside it or, under the same token, even fewer have ever cared to take the temperature of a bottle of champagne to make sure it hasn't gone over a 38°F simply because "some thing just aren't done".

But the main element to make its debut in "Goldfinger" was definitely the humor which seemed to fit these films so well. After all, who wants to spend two hours with a cold-blooded murderer if he's not at least a likable one? That such humor sometimes seemed to completely take over the franchise is another story.

The first two entries in the series ("Dr. No" and "From Russia with Love") played like detective novels in which the envelope was obviously pushed in terms of sex and violence but were mostly characterized by their overall seriousness. In "Goldfinger," Bond's tongue seems to spend every other minute targeting Goldfinger ego and invariably hitting a bull's eye; no wonder he almost gets lasered in half by mid-point in the movie ("choose your next witticism carefully Mr. Bond, it may be your last!"). 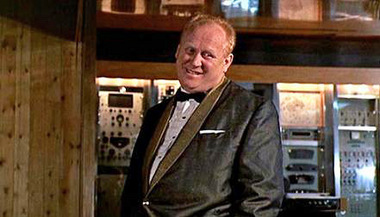 There are several reasons why "Goldfinger" is still the best James Bond film after all these years, never mind the fact that just about every subsequent entry became bigger than the last; that more recent stunts have gotten so much elaborate and refined, the gadgets more powerful, the cinematography more sophisticated. It would be a mistake to try to compare the set pieces of the more recent Bonds to "Goldfinger's" as that would be similar to saying the SFX in the second "Star Wars" trilogy were better than those in the first, an opinion that may not be completely untrue, but just ask yourself: which ones felt better upon a first viewing?

The old and new Bonds are very much apples and oranges and impossible to compare in most levels as they come from such diverse times; just remember those dirty names given to the older Bond girls (which in all honesty, it took me years to even remotely grasp). 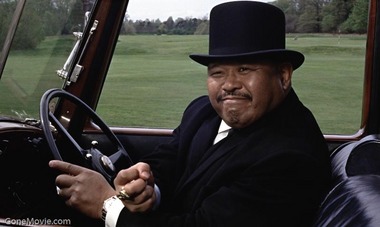 "Goldfinger" is not a perfect movie but even its little warts have their own, particular charm: think for example of Oddjob's razor hat, sharp enough to decapitate a statue but not a woman; the same model airplane used to portray Auric's personal jet when traveling right-to-left on-screen as well as the presidential plane, when going left-to-right; the opening scene claiming to take place in Mexico simply by the depiction of a poncho hanging on a wall and an extra yelling out loud "ajuuuaa!"; Goldfinger personally setting up a nuclear bomb to only 3 minutes 50 seconds and still taking his time saying goodbye to 007; and of course, one of the funniest continuity errors in the history of cinema, the group of military men tied up by Goldfinger at film's end struggling to free themselves, only to be shown in a later scene to have inexplicably knocked themselves cold.

There were several bits of luck that the Bond series ran into early on which were crucial in their starting off on their right foot. For example, try to picture anybody but Connery kicking off the series in the role. I have nothing against Timothy Dalton (who at least I didn't mind) but it just wouldn't have been the same. Additionally, I have no idea what the deciding factor was for producing these films in the UK; after all, Hollywood has been known to depict any part of the world without ever having to leave a studio. But some of the UK-based technicians were instrumental in making the series such a success, perhaps none more than Ken Adam who should be more discussed among the most notable architects of the 20th Century, even if his designs are not actually livable. ("Goldfinger" in particular is truly a beautiful film to look at with all of its golden tones, be it while depicting the inside of Auric's jet, with matching air hostess, and most specially that wild rendition of Fort Knox's interior in which it almost seems as if the gold bars in there are shined regularly).

I think it was the right decision to avoid using Russians as villains throughout the series, even in the height of the Cold War, as that would have reduced the Bond movies to just another group in the many spy adventure features that came around those days. 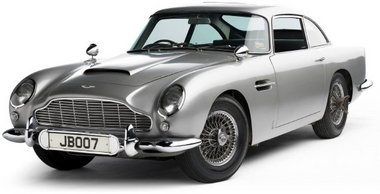 What I believe makes "Goldfinger" move up from merely a superior Bond film to a great one was the presence of plenty, undeniably iconic scenes. Granted, "From Russia with Love" had a better, more complex story but "Goldfinger" had the image of the gold-painted murdered woman that is used to make sure that Bond gets the message to get off Auric's back; that fantastic Fort Knox duel which is almost a chess-match with all sorts of twists and turns, set in the most fantastic of places; and that most famous of all movie vehicles that was sort of the equivalent of a motored Swiss-Army knife, which made it so much fun. It's not easy pointing out exactly what it is that made these elements iconic in the first place but here again, the element of surprise and awe is present in all of them. Compare their raw effect with that of those identical elements in the newer Bonds such as the recent Aston Martins which may have an answer for every specific threat the current villains pose, but did anybody out there really feel the types of reactions mentioned above while first viewing any of them?

One could make a point that the day "Goldfinger" debuted, September 17, 1964, was in many ways the day "Bond movies died," in the same sense that Siskel & Ebert's said the opening of "Star Wars" as "the day that movies died" -- in other words, so remarkable was its success that for years (throughout Sean Connery's tenure of the role, at least) every new film in the series appeared to be yet another shot at making a bigger and better "Goldfinger" which resulted in the over-blown entries that later became the stuff of parody for characters like Austin Powers.

Still, we are clearly talking about the longest movie series of all time and plenty of later Bond films have been more than memorable, so "death" might be a bit of an overstatement. Let's also remember how many other big movie series, felt already stale by their third or fourth entry ("Lethal Weapon," "Superman" and "Indiana Jones" come to mind). Yet here we are talking about 22 Bonds, plus the countless imitators that have taken advantage of the fact that so many of the Bond standard elements are now part of the public domain: Jason Bourne, Jack Bauer, and so on, are all characters whose initials' are not the only thing that was taken from Bond and not the other way around.