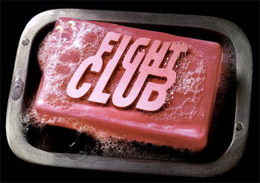 Religion takes you from darkness into light, and David Fincher's deeply religious "Fight Club" grows darker and darker still. Here, piety is anarchy; anarchy is destruction; self-destruction is ecstasy. It plays whimsical department store music while its broken shark teeth chew at you. Its sound, consistent plot leads straight to an abrasive, perhaps annoying schizophrenia. It is the Bodhisattva, Satyagraha, and the Masnavi mashed up and played backwards with the wrong device. This movie is the anti-movie, and it enjoys every moment of it.

Our Narrator (Ed Norton) has loaded his life with every falsely genuine McProduct and now he can't sleep. He finds his cure in crying, and to cry he must attend services at church, but not in the mornings. At night. He attends 12-step programs of every sort. What does he need? He needs to feel. When he is on a plane, he hopes it will crash. When he survives a car accident, he gets curious. Others conduct random acts of theft and naughtiness. Some of us, when we hear of a tragedy feel relieved when we have no connection to it, but some us, however, feel validation when we do. He is that typical upper middle class American who is so lost in his imagination that his mind is razor sharp - to hallucinatory levels - but his five senses have atrophied almost as quickly as his soul has. Meaning, he is just bored by life and purposelessness.

That is the dilemma of American religiosity, isn't it? America is perhaps the most "religious" of the Western nations, yet its religion is so often so thoroughly empty of purpose and utility that an hour at the gym or two hours at the temple of cinema give more benefit to the body and soul. Of course, how can a well-intentioned preacher compete against industries that are supported by million dollar products? Now, this is not to give any sort of nod to the Anti-theists; I'm a believer, a preacher, and an academic in religion. At least religion in its most banal forms often has community, and that is worth something more than what the Anti-theists have to offer. Too often, however, that sense of community produces tribal triumphalism more than legitimate healing.

The point here is that beneath the celebrities in costumes spewing empty promises, true American religion hides its gentle face. True American religion - as this film wisely shows - is the spirituality of brokenness that is run by empathic guides during the quiet of the night. The night time circles of broken souls in those 12-step programs provide substance and substantive friends. 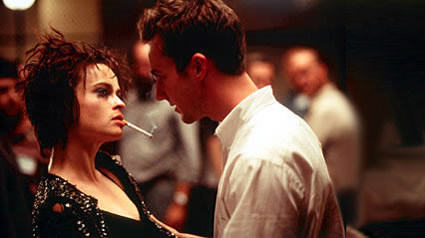 In his world, Narrator finds his villain, his hero, and his personal project. Marla Singer (Helena Bonham-Carter) is his messy gothic siren who invades his terrain. Tyler Durden (Brad Pitt) is his hyper-masculine hipster hero who guides him to his neurotic nirvana. Rob Paulson (Meat Loaf) is his tragic waif, who is excessively masculine and feminine. They are caricatures in contrast to Narrator's blandness. Naturally, in a movie that enjoys contradicting normalcy, we know that these three characters will take on multiple functions.

But, a central thread of "Fight Club" is that we are constant, escapist consumers, seeking continuously to fulfill our appetites. Here, we bore from the 12-step meetings and form Fight Club, a sweaty, messy fraternity of flagellation. Why seek feeling by pretending to be sick when you can beat the pulp out of each other? Further, the appetite wants more: when Fight Club is not enough, then "Fight Club" takes us to Project Mayhem. 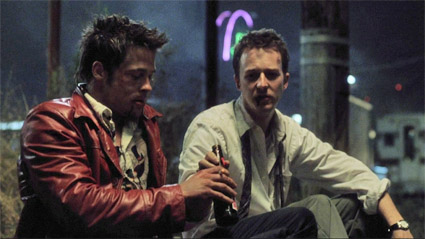 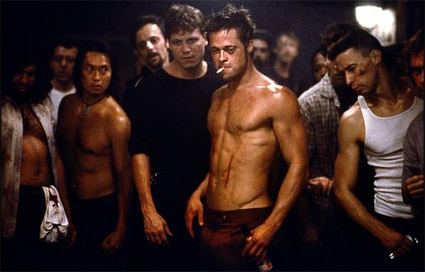 While Fight Club is a primordial basement slug fest with minimal dogma, Project Mayhem is the organized religion with nameless zombie-like followers, certification, (destructive) social consequences, and martyrs. And, from there we see the development of a messianic anti-hero whose antics inspire legends. And, from there, we catch up with our messiah and return to earth. The strange point of "Fight Club" seems to be that the end is always destruction. Either through our consumerism, we devour the planet, or we destroy it. In either case, there is nothing left, and soon we die anyways. So, rather than imprison ourselves with our hopes of self preservation or even our fears of decay, we should free ourselves by self-annihilation.

It is also interesting that of history's many schools of philosophy, the school that seriously developed any roots in America is Pragmatism. While other schools have their clever and complex ideas, the pragmatic school tends to be just that: practical. Similarly, one of the difficulties in this movie is that our characters are subjected to their imaginations. When life begins to seep into the mundane, it is our imagination that frees us. But, the limits of our imaginations then imprison us, and the way to freedom is - according to the movie - to destroy our imaginations. The remainder is practical reality and sunshine.

I really don't know if I like this movie, but I find myself revisiting it again every few years. I suppose that part of what I appreciate about the film is that when I reach its end, I really do feel like I've been taken on a long journey whose end is so distant from its beginning. It is a sort of "A Clockwork Orange" for its generation, and likewise has its cult following, which is especially interesting considering its material. But, like "Clockwork" it is playful and decadent; sometimes the brutality goes so far over the top that I have to turn away from the screen.

More than that, every time I revisit it, I love the beginning, find its further developments intriguing, but am disappointed by its final act. This is how I tend to feel about Fincher's movies: he is a master of mood, but the final acts seem to wrap up too quickly. But, everything else about this film is wonderful.