I remember my father's face, but not his voice. If I close my eyes I can perfectly see his expression of disapproval this one time when I was five years old, and another one of deep affection, at more or less the same time, but I cannot remember what he said - or even if said something - in each of those moments. What I do know beyond any doubt is that "The Tree of Life," a masterpiece of filmmaker Terrence Malick, kindly led me to these reminiscences through his own philosophical reflection on human nature and our history on this planet. In this sense, the film represents a deeply religious experience for atheists, humanists, and especially film lovers.

Written and directed by Malick, the film is built without any obvious chronology or even a specific plot, leading his narrative through fragments of memories, feelings, impressions and thoughts of his characters - especially Jack O'Brien (Penn as an adult; McCracken in adolescence), the eldest son of Mr. O'Brien (Pitt) and his wife (Chastain). Raised in a small town in Texas during the 50's (as the filmmaker himself, by the way), Jack lives through the discoveries of youth, is repressed by his father's rigidity and is dazzled by the spontaneity of his mother, spending his days investigating the surroundings alongside his brothers RL (Eppler) and Steve (Sheridan) and forming a particularly strong alliance with the former - whose death at age 19 somehow starts the film.

With a contemplative and calm tone that finds beauty in the color of the wet grass, in the expressionless face of a cow and in the gentle breeze that sends shivers down the young version of Mrs. O'Brien, The Tree of Life soon establishes one of its thematic concerns when discussing the difference between "Grace" and "Nature", emphasizing the humanistic altruism of the first as a counterpoint to the relentless indifference of the second. At the same time, it's curious how often Malick pauses on long shots that expose the grandeur of rocks, the strength of the ocean or the imposing figure of a huge tree while we hear the protagonist lamenting the distance that exists between him and a "You" that may represents the Mother, the very essence of Nature or even a "God" that is constantly invoked/blamed by the characters while they face their doubts and personal obstacles (a concept that I'll discuss later) - and this contrast between Grace and Nature is even expressed through the differences in the way Mr. and Mrs. O'Brien deal with their children and with life in general. 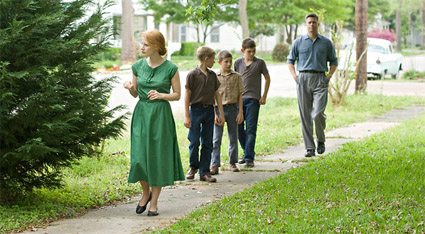 Portrayed by Jessica Chastain (a revelation) as an ethereal creature whose constant placidity is seen in an almost angelic light thanks to the way D.P. Emmanuel Lubezki brightly lights her skin, Mrs. O'Brien seems to be intensely communing with Nature, often appearing barefoot on the grass, reaching out to embrace the wind or playing happily with the water - and her harmony with the world around her manifests itself in the affection by which she treats the children. Meanwhile, Brad Pitt gives his character a carefully calculated hardness through his military haircut, his prognathism and his severe ways. Still, even though Jack seems to resent the discipline imposed by his father, Pitt never allows his character to become a caricature, smoothing his portrayal with occasional gestures of displaced affection and the conviction that his various rules have the objective to strengthen his children. And it's symptomatic that, at some point in the narrative, he encourages the boy to never abandon his dreams like he did when he gave up on his music and went to the army. However, although both parents clearly love their children, the fact is Mr. O'Brien worries about conditioning them through discipline, while his wife essentially seeks to teach them how to love. 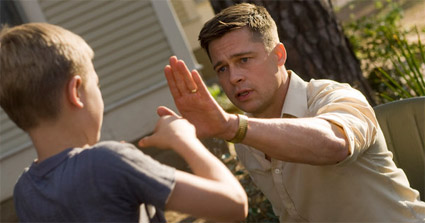 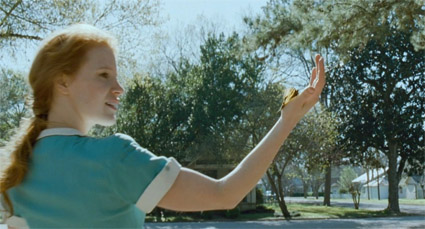 But the fact is The Tree of Life is guided by Jack's point of view - and it's no wonder that during most of the film, Malick and Lubezki keep the camera in a low position, forcing a child's perspective onto the viewer as the boy watches the world, discovers his own sexuality, experiences guilt and surrenders to jealousy when his younger brother's sensibility makes him a favorite of the father he himself resents so much. Moreover, the relationship between Jack and R.L. and the dynamic of the O'Brian family are portrayed by the film in a sensitive and complex way through snapshots of those lives, bringing us closer to the characters in a much more effective way than most of the traditional, chronologically structured narratives. 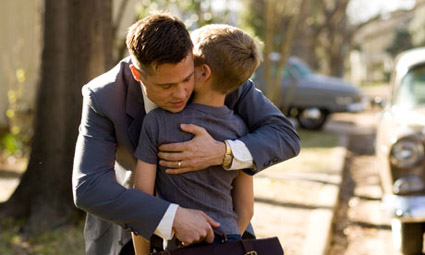 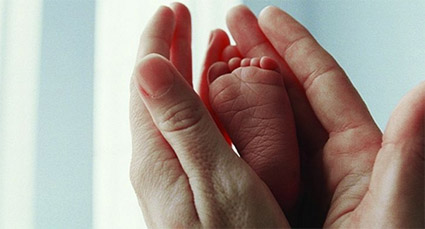 However, the brilliance of the movie lies not only in the manner used to portray this family, but also in the contextualization of their relationships within an infinitely greater picture: the rise of the planet itself. Designed with the help of visual effects supervised by the master Douglas Trumbull, the sequence that depicts the origin of life is fundamental to establish the O'Brien family (and all humanity) as a tiny, insignificant and lonely speck in the midst of the universe -- which in itself already gives an immediate answer to the question a character addresses to "God": "Who are we to you?"; a question received with the same indifference by which Nature would meet the questioning of a fly or a boulder. How can we expected that the "Universe" or "God" (represented in the film by a flame that symbolizes the "essence of life") would care about the death of a child out of billions of years of evolution and history, even if that death represents the most powerful experience to the grieving parents? "He's in God's hands now," says R.L.'s grandmother, trying to console Mrs. O'Brien - who answers with an implacable question: "He was in God's hands the whole time, wasn't he?". 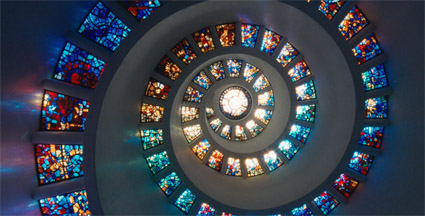 In this sense, the vision of the "divine" presented by Terrence Malick is that of an unequivocal secularism - and thus it's perfectly natural that the sequence that illustrates the beginning of life on Earth is accompanied by a track that uses a choral that directly refers to sacrum music, as if the great composer Alexandre Desplat was wondering if that natural phenomenon wasn't beautiful enough that we would still demand a supernatural intervention. Because if there's something undeniable in The Tree of Life is the overwhelming absence of God: constantly questioned and called by the characters, the "Creator" appears only in religious representations such as stained glass windows that go up in spirals (which in some way refer to DNA) or as a church seen in the distance - and balanced in the shot by a tree in the foreground, again referring to the "natural". Indeed, religion itself and its paternalistic / authoritarian view of 'God' is symbolized by Mr. O'Brien, a man who enforces rules and dogmas, manifests prejudices, makes threats and deal punishments and who, in the end, still requires expressions of devotion and unconditional love of his children. (And look how Malick contrasts this attitude with that of Nature itself, which, even if it's ruthless, seems infinitely more generous in the figure of a dinosaur that, albeit irrational and primitive, displays a surprising compassion for an injured brother.) 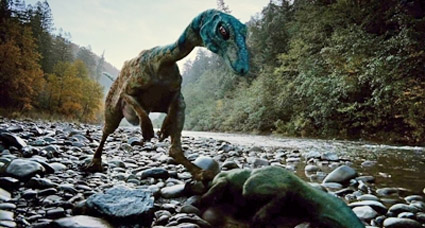 Aesthetically superb, as director of photography Emmanuel Lubezki seems to paint with the stars and with nature itself, The Tree of Life is a film that provokes reactions even though its symbols might not find shelter in the mind of the beholder - the purely sensory experience evoked by its images is enough to move us: from the sensuality of the female body marked by a light satin dress to the nostalgic sepia opposed to the gray metallic futuristic world experienced by the adult version of Jack, the film never ceases to amaze us. And Lubezki also deserves credit for not trying to differentiate, through photography, the "real" incidents from the scenes that portray symbolic representations of memories or feelings, since, for all intents and purposes, all of them are equally relevant. 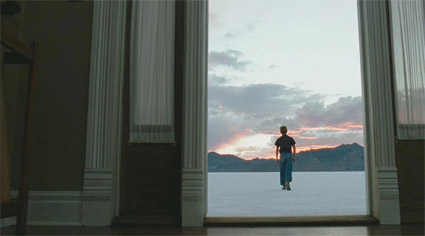 Because the truth is that our memories do not actually live in the past, as they continually shape us, make us feel pain and dictate our reactions in the present. That is, by the way, what Malick demonstrates to understand so well in this humanist poem: that every moment we live is precious, from the in-numerous kisses we give our children at bedtime to the countless times we hold their hands before crossing the street. Each floating leaf, every joke, every smile, no matter how fleeting those moments are, help to build our stories and our relationships - and by portraying this, The Tree of Life is, above all, a fabulous celebration of life and the human kind - which, even knowing it's moving towards the end, remains willing to find a smile on the touch and the love of the next person.

And that's why Jack allows himself a tiny smile for the first time in his adult life after coming in terms with his past. Yes, the world may have being formed over 4.5 billion years ago and we can be negligible on this scale, but we are still optimistic and magical enough (or arrogant, why not?) to believe that this wonderful stage was built, in the end, to hold a species that, even being an extra in a universal production, is unique enough to consider itself the protagonist of this long and magnificent History.