With the Oscars finished, I'm watching "Dr. Strangelove" and thinking about the sadness of 2013. The Academy said goodbye to, among others, Roger Ebert and Annette Funicello. I'm writing to say goodbye to Jeff Shannon who passed away last year, 20 December 2013, but whose memorial service will be held later this month.

Jeff was the original Demander and I joined the column late, first to write reviews on opera and dance, and later, when that stage stuff was eliminated from the column, to review movies. I have been a theater critic for many years, writing a few movie reviews.

While I usually have no trouble writing for my blogs, I admit writing for RogerEbert.com gave me brain freeze. Jeff was kind and encouraging and he's the primary reason I continued.

Jeff and I didn't correspond about movies so much as about life and why we write and even whom we write for. Yet it wasn't until recently, talking to Jeff's brother, Kevin Shannon, who now has the unenviable task of being the executor of Jeff's estate, that I understood more fully why Jeff wrote about the movies.

Kevin told me that as a boy, Jeff had dreamed of being an actor. "He was going to be a terrific actor. He had star quality. His high school drama teacher even said, he was the one, the one in his 30-plus years of teaching that would make it." And some of his classmates made careers as actors. Kevin guessed that Jeff would have gone on to direct because Jeff had also been fascinated with the technical side of movie making. 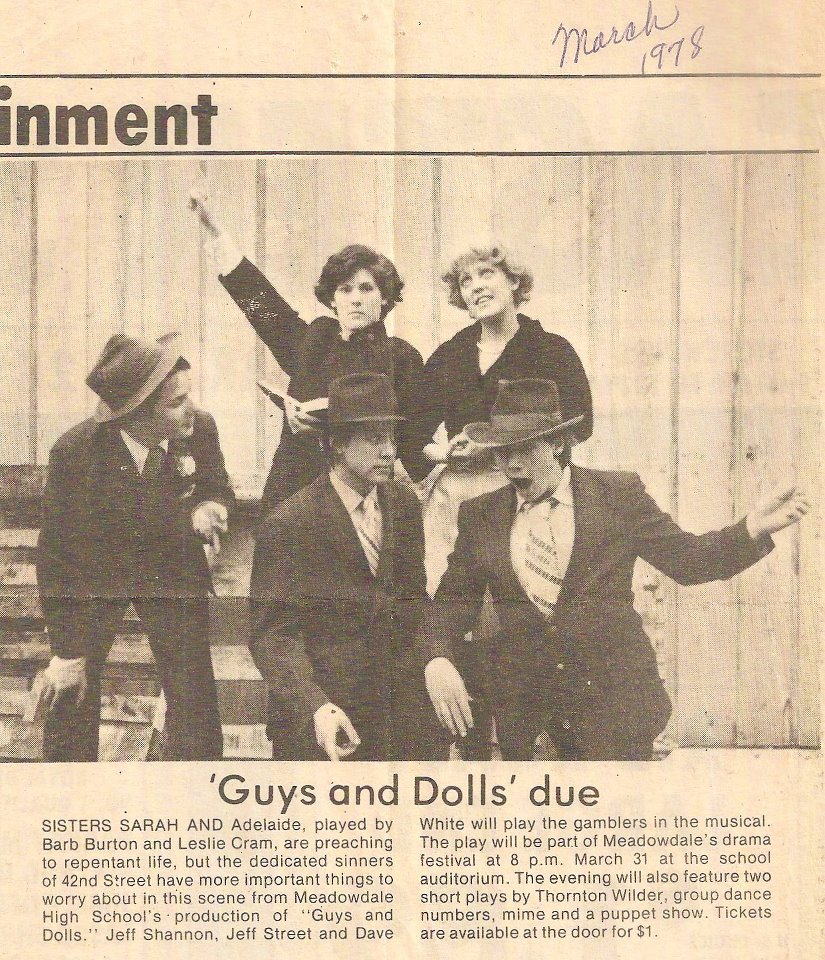 So there he was, a young man with the future ahead of him, having recently played Nathan Detroit in "Guys and Dolls." A few weeks after his high school classes had ended, he took a graduation trip with his friends to Hawaii. He had a few days of fun and laughter until his life would be forever changed at Makena Beach. The beach's nickname is "Break Neck" and that's what happened in an accident that would change Jeff's life.

Kevin commented, "He always talked about how, once you've been injured, the scope of possibilities narrowed."

Yet Makena Beach would eventually connect Jeff with Clint Eastwood. Jeff met Eastwood on a set and learned that Eastwood had a beach house there. Talking with Eastwood was one of his fondest memories. Seeing the photo of Jeff with Eastwood used for the earlier piece on the MSZ blog about his death, one of his friends, Tom Keogh wrote on Jeff's FB page, "When I asked Jeff Shannon what went through his mind when this photo of him talking with Eastwood and Spielberg was taken, he said, "I thought, 'AAAAGGGHHH! DON'T LOSE IT! DON'T LOSE IT!" 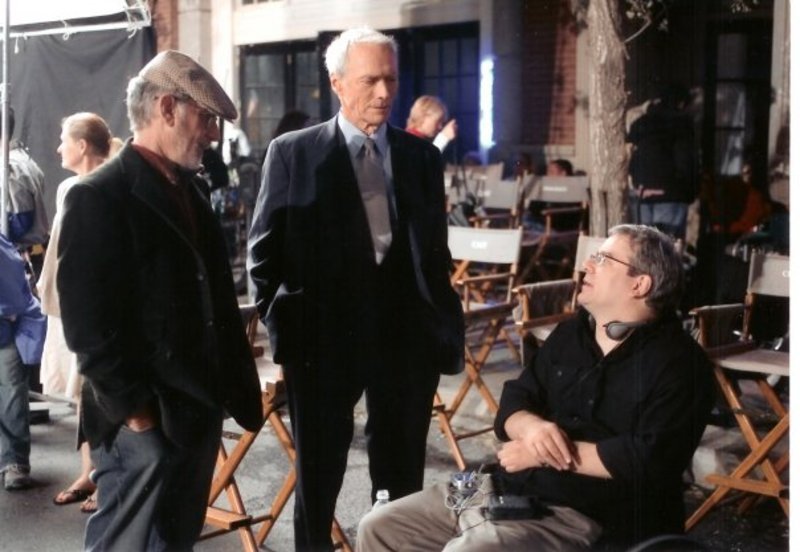 For a time, Jeff's life didn't seem to have a particular direction. Kevin stated, "He had gone to a film studies program in Ohio" (Wright State University in Dayton, Ohio) where he was as part of a spinal cord research project. "But he didn't graduate or get a degree." Their mother suggested that Jeff ask a local weekly if they might be interested in movie reviews. From there, Jeff steadily advanced, writing for Amazon.com and Microsoft Cinemania and eventually freelancing for the Seattle Times. Through his film criticism, he met Eastwood and Roger Ebert. Jeff would become a writer for Roger Ebert's website as the original Demander. 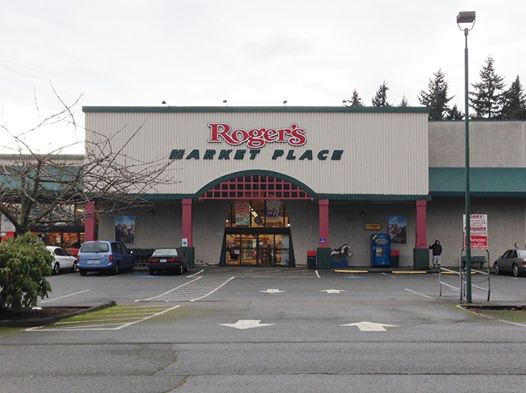 Kyoko Matsumoto wrote on the FB page: Before Jeff Shannon died, he told me he always wanted to take a photo of Roger's Market and send it to Roger Ebert. But then Roger died earlier that year. So I made a special stop to take this photo to honor both Jeff and Roger (who I met at the first Sundance Institute in 1981, or was it 82?). And this site in Mountlake Terrace is for sale, by the way.

Like Jeff, I write about social issues that are close to my heart. So after Roger's death and the subsequent reconfiguration of RogerEbert.com, I understood when Jeff left to write about disability over movies. He sent an email to a few of us explaining, "I realized that I had neglected my writing and advocacy related to disability issues...The main thing for me is, I think Roger would've approved, ironically, of my decision. We had bonded over our disabilities, and I'll be doing what I can to help Roger's Chicago friends Thea Flaum and Marca Bristo in advocating for the disabled, in addition to writing and activism here from home."

Jeff then asked me to keep him updated on the extended Ebert family of writers and said we'd stay in touch via Facebook. He even mentioned that we might meet at Ebertfest this year.

Did he know his time was drawing to a close? He wasn't well enough to travel to Ebertfest in 2012—my first appearance there when all the Demanders were guest panelists. I went to meet Roger, whom I had been corresponding with for several years by then, but I also wanted very much to meet Jeff. Based on my conversations with his brother Kevin, I'm sure Jeff thought he had more time, more years. He never thought to reveal passwords or write a will, leaving his older brother Kevin struggling with bureaucratic red tape for a little over a month.

Yet, Jeff was looking back. In June 2013, he posted a poignant comment on Facebook with a photo: Quadriplegically speaking (is that even a word?), today's my 34th birthday. This photo, courtesy of Sarah Litchfield (Lerfald), shows me on Makena Beach, Maui on 6/24/79, shortly before I was injured. I'm in white shorts, holding a white Styrofoam 'boogie board,' moving toward a wave identical to the one I fatefully dove into just a little while later." [See the photo at the top of this essay]

Our last email conversation took place on Halloween. I still thought that some day I might fly up North to meet him and went about my business. I wasn't particularly concerned when in December 2013, Jeff noted on Facebook that he had a pneumonia. He didn't seem particularly concerned, either.

Yet for the second time last year, I was lulled into a false sense of security that some day, I would have time to connect with a mentor and confidante. Jeff had a way of sharing, of reaching out to people and touching their lives. In too few years, Jeff had become part of mine.

I learned about his death on Facebook. His brother Kevin wrote to tell us ending with, "One of our favorite films as kids was 'Little Big Man' and I told him, as Chief Dan George's character often said in the film, 'It is a good day to die.' There was an almost laugh to his response, but with my final words to him, he was gone.
'Fly. Run. Be free.'"

Kevin called his brother "the perfect film critic for the middle of the road crowd" because besides his popular tastes, he also could push people to branch out and see films that they might not ordinarily consider. Kevin told me Jeff loved Kubrick's "2001" and was a great fan of all of Kubrick's works. Now I'm wondering what Jeff might have said about the cutting of the pie-throwing scenes from Kubrick's "Dr. Strangelove" and the conversations we might have had, Jeff, Roger and I.

Jeff Shannon's memorial service will be a celebration of his life and you can join in the celebration.

If you'd would like to submit photos, images, movie scenes, etc. for the memorial, ,then email them to Kevin Shannon by before midnight on 9 March 2014 to poetfiend@gmail.com. 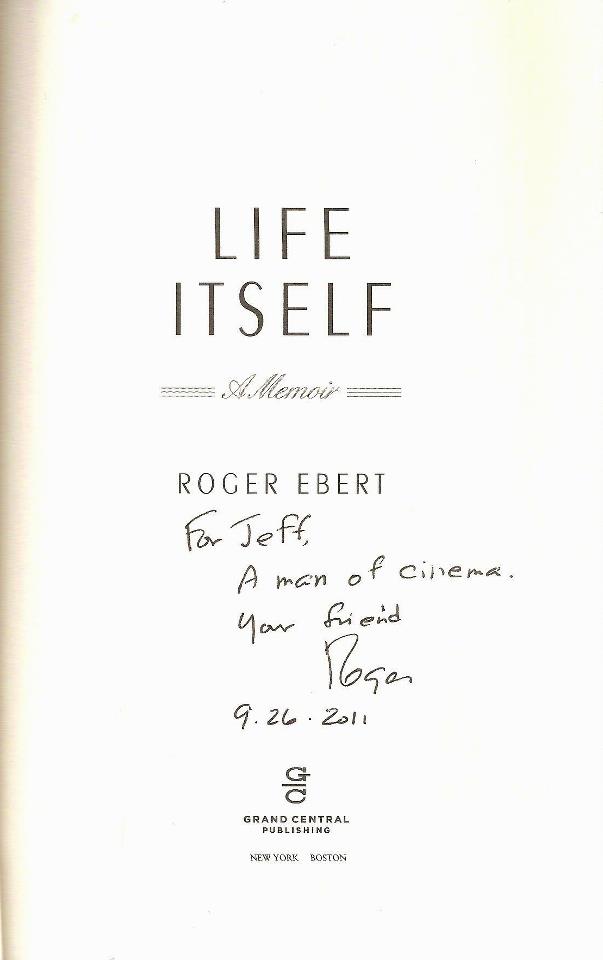