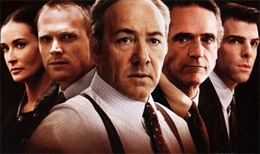 I have a friend who promised himself over a decade ago never to be at the service of his career, and rather, that his career should be at his service. The result is that his wife left him, his family looks down on him, he earns a fraction of what his peers earn--a fraction of what his aptitude would dictate (I think he's a genius). He takes most of his jobs on contract, spanning very short periods of time. And, he is one of the happiest, most calm people I know; at least he seems content. In contrast, J.C. Chandor's "Margin Call" (2011) is the story of a group of high-powered bankers getting set to lose their jobs, and perhaps more.

Part of the greatness of "Margin Call" is that I had no idea what was happening, yet I was completely absorbed. I can try to explain the plot later, but the collective, hushed desperation of the characters was enough to keep me worried. Add to that, the silence of this film: I don't remember a soundtrack, yet I feel like I remember a lot of white noise. This movie is a stage play composed mostly of close-ups of silent people. Add to that, this film takes place almost entirely at night. Not at 8pm, but at 2am.

Now what is the story about? First, an investment bank lays off many of its employees. I've lived through lay-offs and buy-outs, and I am sure most of you have also. They are ugly. They start out as rumors that begin to rage, and soon get addressed by middle-management to put out the fires. Then, upper management starts communicating via electronic announcements, making vague promises mixed with comments about new opportunities of competition.

Then, management at all levels starts having large meetings, offering a few specifics, a few statements of hope, and a few cold realities. Then, the waves begin. Colleagues get called into smaller and smaller meetings that seem to get shorter and shorter. Then, the desks start clearing. Then, the office starts getting quieter. 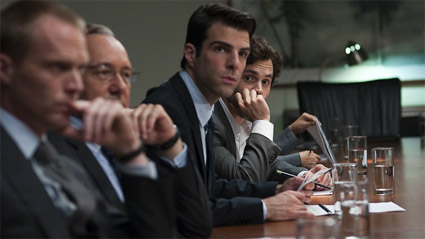 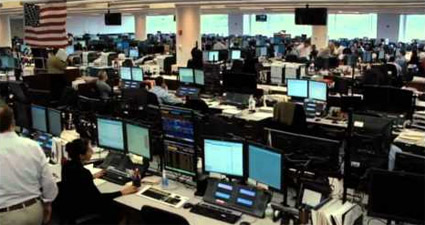 One of the first to get laid off is Stanley Tucci. Because he is a famous actor, we know we shall see him again. But, as he leaves his office, he takes his phone and slams it to the ground. Such a moment is unpleasant in any context, but already this movie is so silent that the jagged cracking of the phone seems so much more jarring than normal. It reminds me of the difference between witnessing a car accident in the movies and witnessing a car accident in real life. One feels choreographed and geometric, while the other seems like an ugly cluster of tearing metal, plastic, cloth, and flesh. 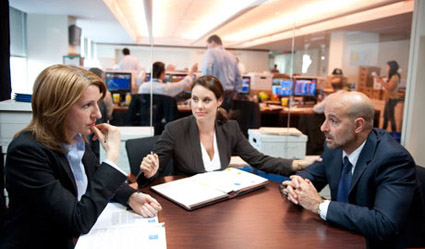 Prior to leaving office, Tucci hands some files to Zachary Quinto. Because Quinto is young and polished, we assume he is very sharp. And, Quinto analyzes those files to discover something that he explains in large technical jargon. Even when he tries to explain it in simple language, I do not know what he means. I struggle now to try to explain it to you, in movie language: 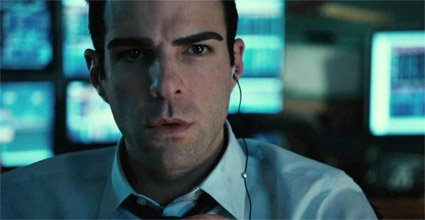 But this is a movie about big business: though many practices were ethically questionable or just plain wrong, no law is broken, so there are (technically) no villains and, technically, no victims. Rather, answers must be given to investors, customers, and competitors, and that is something scary. In a world driven by public relations, the court of public opinion feels like an inquisition. So, someone is publicly scapegoated and privately gifted with a severance package, many others are fired, and the upper-management executives find some other route in the business world to cash in.

So much of this film involves waiting and searching, with the slight hope that the inevitable will not happen. In simple language, that is procrastination. First, the firm's employees were already waiting to find out if they would get terminated. Then, a thread involves searching for Stanley Tucci with the hopes that he would have answers that could save the company. Then, they wait for the arrival of the heads of the company, and whatever that means for their careers. During their meetings we witness a number of "I told you so" and "What were we thinking" moments. But, the overarching deadline that all are facing is the opening of business, next morning. The inevitable, here, on the other side of that deadline is the end of their company. Their goal is to cut their losses, financially, as well as in their own personal futures.

If their decisions have serious consequences on the lives of other middle class people in other parts of the country, we do not see it, and neither do they. But, I wonder how many of their responses actually reflect their concerns about the company. Jeremy Irons plays a big businessman who can seemingly move from board to board. In losing his job, Tucci seems to give up his whole sense of worth, and his worth seems to be driven by serving. He feels especially betrayed by disloyalty. Quinto is so new that he has already reached heights - participating in board meetings - that few of his peers would. His peer, Penn Badgley, cannot keep his composure, fearing the loss of a dream job. Their supervisor, Paul Bettany, has witnessed enough that he knows there are games and people to be played, and is somewhat resigned to it. Higher level executives Demi Moore and Simon Baker have their own stories. She faced abuse as much as she has given it; his tunnel-vision ambition involves a lot of narcissism and abrasiveness. 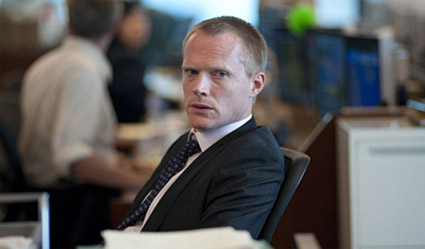 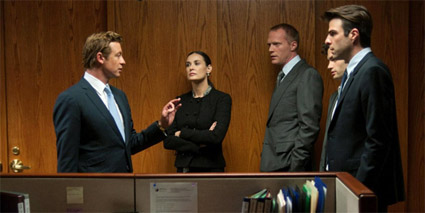 I suppose that anyone truly sad about the death of this company would be a founder who is long since dead or is someone without a foreseeable professional future. Otherwise, the language from most of the characters is clear: protect your own self.

Beyond the strength of its silent, dark atmosphere, the powerhouse cast does an amazing job of looking serious. They are serious enough that somehow they kept me staring at them. Tucci, Quinto, Bettany, Demi Moore, Irons, Simon Baker and Macy McDonnell are all present and perfectly cast, exercising various levels of quiet. On the other hand, Kevin Spacey is the outlier in the film, and appropriately so. He loses control over news about his dog, but is very reserved when talking about his son. As manager, he gives his employees a speech reminiscent of a general telling his soldiers that they are facing death, but must fight. Instead of honor and prestige, for the young banker has little concern for either, Spacey offers huge cash bonuses. In some ways, he does not fit with the rest of the cast, in other ways, his character is perfect for what it is: the manager in the middle, who speaks to the people at the top and at the bottom. 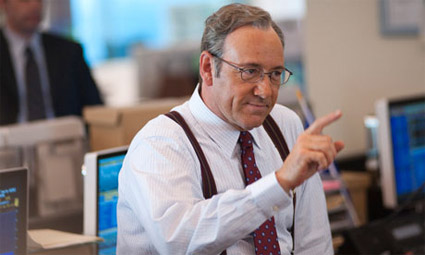 Watching this movie, I really appreciated how we define ourselves in our society. In our culture, when we are introduced, the first question after the ice-breaking pleasantries is often some form of "What is your name?" and the second is "What do you do?" And when we answer that second question, are we seeking to inform or impress? When we ask "What do you do?" are we asking "How do you occupy your time?" or are we asking "What's your place in our world?" or "How do you make the world a better place?" or "Can you tell me something unique I haven't heard before?" I don't know.

We are a culture in which we define ourselves according to our employment, admire those people who truly have a vocation, in the sense of a calling. And, we revere those people who have succeeded at finding what seems to be their bliss. But, for so many of us, if that employment is taken away or if we give it up, then it is as though we lose our sense of meaning and purpose. I think about my friend who made that promise to himself about his career, knowing that he's changed careers multiple times in his life. I think he seems so content because he spends so much of his time not working.