Our neighbors the sociopaths 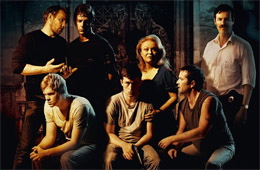 While revisiting David Michôd's "Animal Kingdom" (2010), I wondered what it was like for its passive teenager hero to live with his heroin addict mother at their small home. We can only assume that she definitely could not get the Mother of the Year award, considering the mundane but eerie opening sequence. It's around afternoon, and her son is watching some TV show, and she seems to be asleep next to him on couch - but we soon learn she died from an overdose.

Her son, Joshua 'J' Cody (James Frecheville), already called the ambulance. The paramedics arrive, and they tell him it is too late, though he is more concerned about what's going on TV show. Later that night, being at a loss about what to do after his mother's death, he calls his grandmother Janine (Jacki Weaver) for help, who eagerly comes to pick up her daughter's disoriented son and takes him to her house. 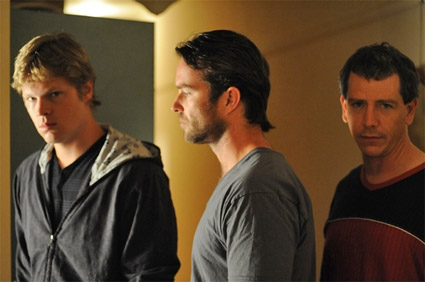 However, we come to realize that, no matter how lousy mother she was, J's mother was probably his only protection from her criminal family in Melbourne. There is a good reason why she was scared of them; all of his three uncles have been involved in various criminal activities including armed robbery and drug trafficking. Craig Cody (Sullivan Staplenton) is a nervous, volatile drug dealer. Darren Cody (Luke Ford) is the most passive and obedient among three and usually follows his older brothers. Andrew Cody (Ben Mendelsohn), the eldest brother nicknamed "Pope", is an armed robber currently hiding from the police. And Janine Cody is always near her sons as the matriarch of this dangerous criminal gang. Even though they are all grown-ups, her sons are still her boys to take care of. 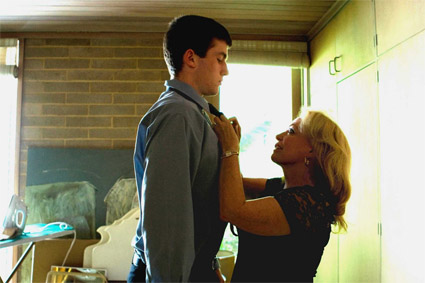 Now J becomes a family member again, so he begins to learn the ropes from his uncles, such as how to scare off some aggressive strangers they come across on the street. As the beginning of the main title sequence suggests, their world is more or less like the jungle where only the strong rule and survive. They are a bunch of vicious beasts who have been dominating their turf, and, surrounded and protected by them, J is a cub who will follow their footsteps.

However, it is a really dangerous time for all of them because the reigning days are over for the Codies, and the police are more determined to get them by any means necessary. They know it's best to stay low for a while, but they do not know what else to do to while scared about what will happen to them (J observes it through his narration; "They were all scared, even if they didn't show it."). Their close associate/friend Baz (Joel Edgerton), the most sensible member of the gang, is tired of this; he is seriously considering moving on to a more legitimate and safer field, while his cohorts are helplessly stuck in their criminal mindset. 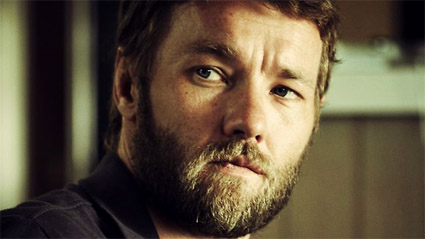 And then, an incident suddenly happens. I will not go into details about what will be ignited by this incident, but let's say the beasts in the story get more scared than before. Like predators stuck in a corner, they become more paranoid and dangerous. In their view, even a family member can be deemed as someone expendable when their safety is concerned, so J's situation becomes far more unpredictable when detective Leckie (Guy Pierce) approaches to him. Leckie thinks J is the weak link, but so do J's family, who also regards J's girlfriend Nicky (Laura Wheelwright) as another potential danger. 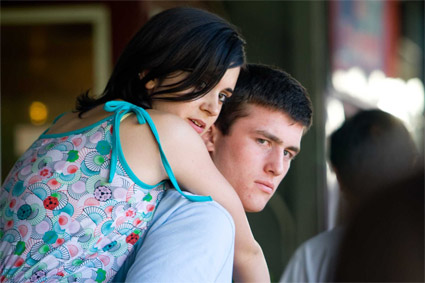 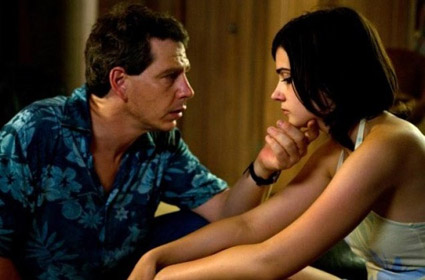 The director/writer David Michôd does not exactly break new ground in the genre, but his first feature film is a good example of crime thrillers we rarely come across nowadays. Rather than typical flashy crime actions we usually expect from this genre, his gritty noir tale is mainly fueled by the characters and the intense moments between them. With steady maintenance of the languid atmosphere and the foreboding sense of dread and doom well conveyed by moody, atmospheric score, the movie takes its time to grow the uneasy tension behind the scenes. There are few sudden bursts of violence in the film, and they are more effective because of the unease calm they penetrate. In one disturbing scene, Andrew stares at other characters asleep on the couch, while the camera slowly moves around and then lingers on him for a while. We are relieved by the next shot, but that chillingly resonates with the similar shot shown later in the story. Andrew may be a man capable of generosity, but he is also a ruthless criminal who does whatever he impulsively thinks it is necessary. 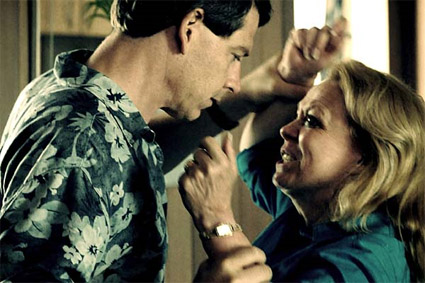 Though the era in the movie is not specific (Judging on several electronic products glimpsed in the film, I guess it's around the late 1990s), Melbourne gained its infamy around the 1980-90s as "the amphetamine capital of Australia" due to increasing drug trafficking, which was followed by the subsequent gangland killings which claimed 36 criminal figures from 1998 to 2010. A family like the Codies actually existed; according to Wikipedia, they inspired not only this film but also two local TV drama series, and one important sequence in the film is loosely based on the Welsh street police shooting in 1988, one of the well-known incidents associated with this criminal family.

The characters and their relationships are established well with a dry, economic approach, and Michôd luckily has a talented cast. Even though we do not see much of the shady business they do for their living, Mendelsohn, Stapleton, Ford, and Edgerton bring the history of crime and violence to their respective characters. We immediately accept them as dangerous people living in the mundane urban area where ordinary middle class households exist with criminally sociopathic ones in the same neighbourhood. Michôd also pays some attention to less important characters like Nicky's mom. The brief moment between her and her daughter lasts more or less than a minute, but it has little poignancy especially during the second watching. Though their relationship seems to be a little problematic, the mother cares about her daughter and the daughter knows that.

The most interesting character in the film is Janine, the emblem of crooked momism. Jacki Weaver deservedly received considerable acclaims along with several critics' awards and Best Supporting Actress Oscar nomination for her unforgettable performance. She initially looks like a silly hyena walking around the lions, but her fierce eyes reveals the cunning mère fatale. The way she kisses her sons as the sign of affection uncannily reminded me of that memorable private moment between Mrs. Iselin, one of the most famous scary moms in the movie history, and her son in "The Manchurian Candidate"(1962). Don't you think her kiss is a little too long to be interpreted as plain motherhood? 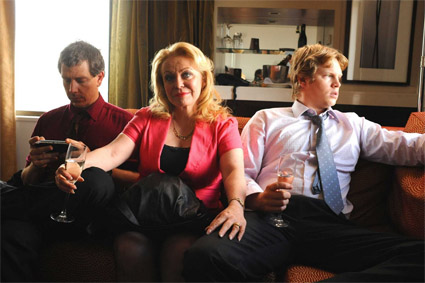 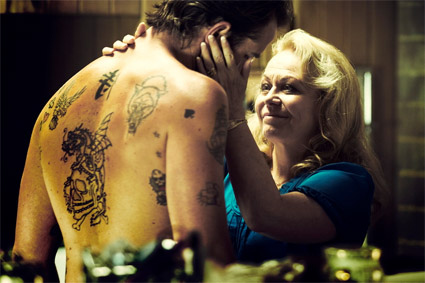 Weaver's wry nuanced acting positions her character on the line between campy weirdness and ice-cold calculation. Though she is old, Janine can be as ruthless as her sons when it comes to her survival, which much depends on her sons. At one point when she has to do something for her dear boys, she justifies her heartless decision with her own twisted logic, while well aware of its consequence as she admits later with her ever-present grotesque sweetness. After all, she does everything she can do for them as their mother, right?

Surrounded by the colorful co-actors, James Frecheville is basically a blank page who functions as our guide to the story. However, he was given a difficult task of playing passive, detached character usually holding his cards behind his back, and he does his job exactly as the screenplay requires. J is relatively naive compared to his uncles, but he knows that it is wise not to reveal his thoughts in the uncertain situation he was hurled into. There is only one moment when he lets out his feelings inside him, which is why we accept his subsequent action later in the story as the inevitability rather than a surprise reversal.

Until a certain point when he learns there is no one to lean on except himself, J is a big confused kid who is not so sure about where he has to stand in the jungle named Melbourne underworld, and that is probably what Detective Leckie and Nicky sees inside his disaffected attitude. Though their motifs are quite different, both care about him and then are frustrated about him. As one of few bright, humane spots in this dark film, Pierce has a notable scene where his detective character tries to give the advice to J on which side he should choose. It has the danger of merely explaining the metaphor of the story, but, thanks to Michôd and Pierce, it works as a part of the story, not the writer's explanation to the audiences. 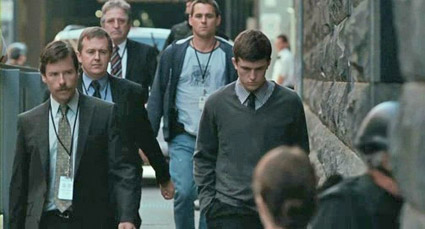 "Animal Kingdom" was one of nice surprises in last year along with "The Square"(2009), another taut thriller from Australia. Both films slowly gripped my attention minute by minute, and they never let it go astray until the credit rolled. I have to admit that "Animal Kingdom" lost some of its power during my second viewing, mainly because surprise and unpredictability are the main components of thriller, but its lean, efficient storytelling still works, and I don't regret about choosing this compelling movie as one of my favorite films at the end of 2010.

Eventually, some of the characters manage to survive in the end. Their positions are changed a little because of, well, the order of nature in their world. I am not entirely sure about whether that ambiguous final scene - is it the new beginning or the final chapter of their criminal life? I don't know, but you may agree with me that their future will not be bright no matter what happens next.