Once Upon a Time in Anatolia 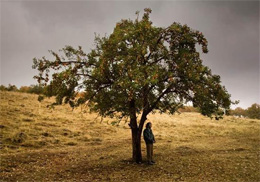 It is quite a long night for them. They have been going around the wide area for hours, but they have not yet found what they are looking for. The sky gets darker, and they become more bored, tired, and frustrated in the deepening darkness. The wind blows ominously, the reeds on the field are shaken by the wind, and they begin to reflect on themselves as the search is being fruitlessly continued in front of their eyes.

What happens on the surface during the first half of Nuri Bilge Ceylan's haunting film "Once Upon a Time in Anatolia" (2011) can be simply summarized like that. Nothing much happens in the movie except few small unexpected things, and they do not make much difference to how the murder case will be closed. We do not know exactly how or why the murder happened, but there is no reasonable doubt about its two suspects. The first suspect has already given and signed a full confession about their murder, and all the local police need is the victim's body buried somewhere outside the town.

It sounds simple, but the problem is, the suspects don't know very well where they buried the body. The first suspect, named Kenan (Firat Tanis), was inebriated when he buried the body. His dim accomplice does not remember a lot about that, although he was not drunk at that time. Kenan says there were a fountain and a "round tree" near the burial site, but that information helps little, because there are many places with fountains in the area and they all look pretty much same. Whenever it seems that they finally find the site, they are at a wrong place.

The movie observes this frustrating procedure in a languid pace which may test your patience. After its opening sequence slowly approaching the victim and the suspects at their drinking party before the crime is committed, we get a static long shot of the field under the darkening sky. We soon see the three cars coming along a winding road. They stop at one spot near a fountain with a tall, slender tree next to it. The people get out of the cars, and the first suspect is asked whether this place is a right place or not. Everybody else is waiting. They go back into their cars and move to another place, but, again, it's a wrong place. Watching their search going on and on with this repeated pattern, I could not help but think of that silly story about an ineffectual general who keeps misleading his soldiers to wrong hills and discouraging them with his befuddlement ("I think it's not here....").

As the cars goes through the darkness descending upon the vast rural landscape of Anatolia, the movie looks at the people inside the vehicles more closely. There are a prosecutor (Taner Birsel) who leads the investigation, a police chief (Yilmaz Erdogan) who is getting impatient with the vague memory of his suspects, and a doctor (Muhammet Uzuner) who will examine the body not found yet. They are accompanied with a courthouse clerk, a police officer, drivers, soldiers, diggers with shovels, and, of course, two handcuffed suspects.

We observe several trivial things about these people while going along with them. The police chief and his men talk about yogurt and a government official they know. The cars are temporarily stopped because the prosecutor needs to relieve his bladder as he did several times before (it is suggested that he has a problem with his prostate). While the police chief and others continue their mundane conversation in their car, the first suspect remains silent in the middle with his darkened face, filled with guilt and remorse.

They stop at another place. The driver, who works for the police chief, confides to the doctor how hard and thankless his job has been. The doctor muses on the life which will be ultimately surrounded by cold darkness while the world will remain just the same as before. As they reveal their thoughts, the camera stares at their backs or their wordless faces; they do have a conversation, but it looks as if they conveyed their private thoughts and emotions only to us.

We also get one intriguing tale, told by the prosecutor to the doctor. It is about a woman who told her husband, supposedly one of the prosecutor's friends, that she would die five months later and died exactly on that day not long after giving birth to her child. As a rational man, the doctor has a good explanation for her death. After taking more with the prosecutor, he also gets a pretty good idea about what the prosecutor tries to seek through telling that strange story to him. As the story filled with subtle touches and opaque feelings, the movie wisely avoids an easy resolution in their interactions; later in the story, it is clear that both of them know exactly what they are talking about, although they never acknowledge it to each other except during one short moment.

Slowly and leisurely moving his story outside the conventions of its genre for more than 140-min, the Turkish director/co-writer Nuri Bilge Ceylan finds space and time wide enough to focus on his characters and their surrounding environment, which are beautifully captured by the cinematographer Gökhan Tiryaki.

Appreciating the notably contrasting looks of the landscapes of Anatolia on day and night, we also feel how much this long night's journey into day is affecting the characters through the weariness shown in their faces. The police chief, who turns out to be more vulnerable and wearier than we thought, goes through complex emotions toward the first suspect as he and others come to learn a little more things about their case. When they stop by the village chief's house for a quick meal around dawn (it is about 4 a.m. when they arrive), the electricity goes out, and the village chief's pretty young daughter appears from darkness with a lamp and cups of tea on the tray. Everyone in the room bewilderingly looks at her face as if she were an angel in this memorably gorgeous moment. They later talk about how she will grow old alone in her village where almost all of young people have moved out to cities.

The morning approaches along with their reality as the second part of the movie begins, and, this is not much a spoiler, they finally find the body. The body is exhumed and examined under formal procedures. They have a small humorous moment when the prosecutor describes the body with an amusing remark. They have trouble with loading the body into the trunk of one of the cars, but they manage to bring the body to the town hospital. The town has just started waking up, and its atmosphere in the early morning and the looks of exhausted doctor may be intimate to you if you had the experience of working all night as the night going away and the day coming from the horizon.

There is still more work to do for the prosecutor and the doctor and others. We see the victim's wife and her son. They angrily look at the first suspect, who feels more remorseful because of his personal reason. Regardless of whether what he believes is true or not, he committed a terrible thing to that little boy, and he knows that too well. The doctor discovers something notable during the autopsy, but, for some unidentified reason, he decides to ignore it. It is not clear whether it is because of something he seems to see from outside the window or merely because of his exhaustion, but it is apparent that small fact will only complicate the procedure while not changing anything in the case.

"Once Upon a Time in Anatolia" deservedly won the Grand Jury Prize at the Cannes Film Festival last year. It is indeed one of those 'slow' films, but the movie was a rewarding experience although I lost some of my patience due to its slow progression during my first viewing. Even when watching the characters from the distance, it cares about the them, and I was drawn to their circumstance. I liked the way their humanity can be glimpsed through the small gestures like offering a biscuit, and I began to like some of the people in the movie as the time goes by. I did not understand or know everything about them, but I could understand how they feel throughout the story even when they do not say anything (Ceylan said in one interview: "I think the human face is the most beautiful landscape. The face tells you everything. It's the only way to get to the truth because, most of the time, the words we say are not true. We have a tendency to deceive others to protect ourselves.").

In the end, as the final scene suggests, the life will go on as usual for them - and they will probably look back on what they went through during that night from time to time. In the middle of their search, one character says to the other that they will probably regard their long journey as one of the amusing episodes in their life. Maybe they will begin like this: "Once upon a time in Anatolia, I was..."

SEONGYONG CHO was born in Jeon-ju, South Korea. He is a graduate of the Korean Advanced Institute of Science and Technology (KAIST) in Dae-jeon, where he makes weekly pilgrimages to the local multiplex. He began his blog in 2008 and has since written hundreds of film reviews (in Korean) while still managing to find time for books, music, exercise (usually treadmill and swimming), and corresponding with Ebert and fellow bloggers.