Omer Mozaffar from Karachi and Chicago: Travels with Clooney in Search of America 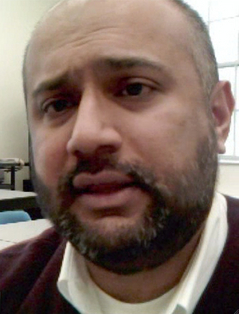 I always look forward to George Clooney's movies. I have to admit, however, that in most movies, he seems to be playing "the George Clooney version of X" or some sort of anti-George-Clooney, who is still that astonishingly handsome man, though weak, withered, and flawed. Perhaps the exception is "Syriana," where he is hidden behind whiskers and adipose.

So, even though I greatly appreciated Jason Reitman's previous films, this film - "Up in the Air" - was going to be another George Clooney celebration. Then, I saw the movie. Jason Reitman stole the show.

Up in the Air is a richly textured movie that invokes a spectrum of our prime emotions. It is a sharp, biting, mirror on society, observing the role that our professions take in defining our lives. When we speak romantically of the American Dream, we speak often of the ability to choose your profession, to choose your destiny. We are taught that you are what you do; the consequence, however, is that if what-you-do is taken from you, then you are nothing.

Deeper than that, this American Dream reflects the hope in being able to fly freely, up in the air, without having to land. George Clooney's Ryan Bingham has almost mastered this dream, save for the fact that it requires him to withhold his own humanity. He must interact and find intimacy, and he must deal with change. When, however, he is finally ready to embrace his own humanity, he must face a third reality: we must still negotiate our own choices with the choices of those around us. He is like Robert DeNiro's Neil McCauley in Michael Mann's "Heat" who keeps himself free from attachments.

While Clooney is flying toward a corporate status, DeNiro was running away from the police. But, both were avoiding the same thing: real or metaphorical incarceration. Clooney speaks of the necessity of limiting life to the contents of a backpack, but can he free himself from the backpack itself?

This movie has careful editing, allowing the layers in story to each slowly reveal themselves through their own methods. Clooney speaks to us through narration and speeches, while speaking to other characters through bits of wisdom - "loyalty is not cheap" and "you die alone" - and meets his match in four women. He lives in the idealistic world of plastic beauty, swooping down into our scarred world of the commonplace.

Vera Farmiga is the romantic interest he follows, while Amy Morton is the abandoned older sister who continues to love him. Anna Kendrick is the spunky professional he mentors, while Melanie Lynskey is the longing younger sister he revisits. The already vivid characters in this film are surpassed by the actresses who play them.

And lastly, the movie features a cameo from a late 1980s one-hit-wonder rap star. I was laughing hysterically in those moments. Unfortunately, the theater was largely silent, so I guess it is a generational thing. But, speaking of generations: I wonder if it will hold up as a sort of voice of the generation, in the way we regard "The Graduate," for it has that feel to it. So, let me ask you this question: can you name some movies that define their generations?

Jason Reitman on "Up in the Air"