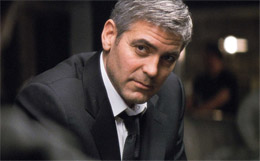 There's something fascinating about films with characters who have mastered a unique way of living their lives or professions, no matter how unusual or obscure, and the two best recent examples I can think of both star George Clooney. One of them is his Frequent-Flyer-Mileage-loving-liquidator in "Up in the Air" and the other is the title character of "Michael Clayton", the subject of this review.

Unlike Ryan Bingham of the first film, Clayton isn't passionate about being his law-firm's "janitor", a position he never aspired to, went to school for, or relishes; it doesn't take him long to figure he simply found himself there one day; someone at his law firm must have realized Clayton's abilities made him the best person for solving unusual problems that had nothing to do with their official services, and that was it. It surely didn't hurt he's not one to sugarcoat his words when you need someone to tell it exactly like it is. 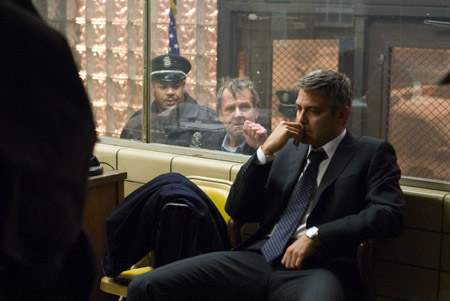 "Michael Clayton" begins with Arthur Eden (Tom Wilkinson), the firm's head, delivering the speech of someone who's clearly gone over the edge. By choosing it as the film's first scene, director Troy Gilroy starts it on its feet and forces the audience to catch up. We fear that the rest of picture will be as incomprehensible as Arthur's words, but little by little the main characters are introduced and without much explanation the plot starts to make sense. 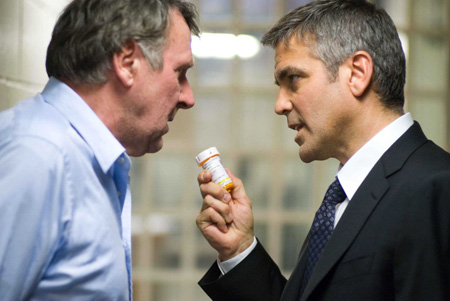 "Michael Clayton" is about a perfect storm in this character's life. His loyalty to his friend Arthur is compromised when the latter stops taking his medication and his social facade collapses, suddenly revealing every "truth" that comes to his mind. The real danger is that he happens to be a lawyer defending a multi-billion dollar conglomerate from a class action suit which means his new found honesty will put the client at high risk, threatening in the process to bring down his law--firm along with Clayton who already has more than enough problems. 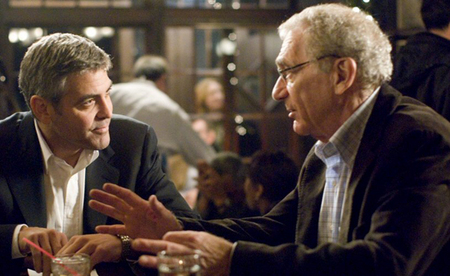 Curious that a law-firm is involved in the plot since the one film "Michael Clayton" brings to mind is precisely "The Firm" (1993) (directed by Sidney Pollack, who co-stars and co-produces here). Both are terrific thrillers about men juggling personal and professional crises in order to keep afloat but I believe only "Michael Clayton" gets to the next level and there are several reasons for this.

In order to better explain, I would like to bring up an anecdote about Ebertfest 2011. I was able to talk to Tilda Swinton about my favorite part from this, my favorite film of hers; it is a very small detail in a big scene at the end of "Michael Clayton" in which we learn George Clooney's character has been secretly recording a confession from her. Once she realizes this, Clayton walks away quickly as the camera follows him; Swinton is left as a small figure in the background, yet she's just close enough that we can appreciate she's become semi-frozen, having to kneel down from the shock of realizing her life as she knows it, is all but over. 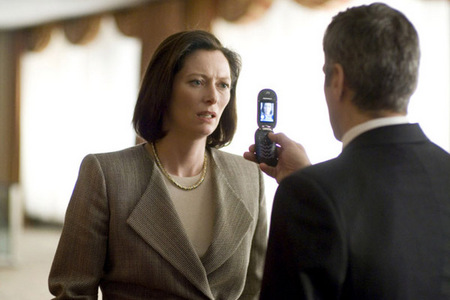 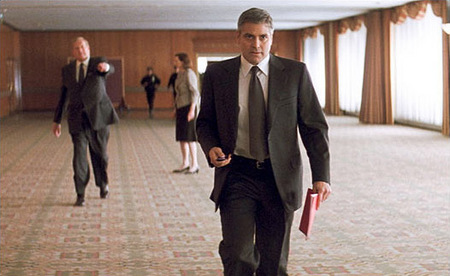 Most audience members will focus on Clayton in his "moment of triumph" but it's in this secondary reaction from Karen Crowde (her character) that we are actually able to grasp the size of the event. This apparently small detail from Swinton is the crucial icing on the cake. Tilda's gave all the credit to Clooney and writer-director Tony Gilroy but she did mention that the thing that she most loves about "Michael Clayton" is how each character exists as an individual. Noticing a puzzled look on my face, she explained that the dialogue of movie characters in most films feels like it was written by the same person. In contrast, every character in "Michael Clayton" speaks as if a separate screenwriter had been assigned. This of course should be the rule rather than the exception, but it's not.

Another reason for "Michael Clayton" being better than the standard thriller has to do with the "moment of triumph" sentence I mention above. In most other films one would expect that after successfully trapping his nemesis in the act, the hero would come up with a snappy comment and happily ride off into the sunset. In "Michael Clayton" we see him get into a cab and ask for "$50 worth" -- in other words, he needs to be anywhere but there. We have grown to associate acting quality with the way lines are delivered by actors and even though he had a great script to work with; George Clooney is able to convey, through the exclusive use of facial expressions, that the $50 in question may not be enough.

Clayton ends the film on what seems to be the verge of a nervous breakdown and there are plenty of reasons for this; his business has gone under and he's in debt with the mob, forcing him to plea to his bosses to bail him out, which makes it all the less likely he'll ever be able to get out of his unhappy position. His younger brother has betrayed him. He's just betrayed the confidence of his older brother. He's lost a good friend. And now people are trying to kill him.

Too often in films we see a character lose a loved one and ten minutes later it's as if nothing ever happened. Not in "Michael Clayton." Even in Swinton's own "I Am Love" (2010) we see her character going from her son's funeral straight to a meeting with her lover; maybe that film's intention was trying to come up with sort of a surrealist ending but it didn't feel believable to me. When a character like Clayton actually acts as he has lived through the extreme events we have just witnessed, this gives his film much more resonance. 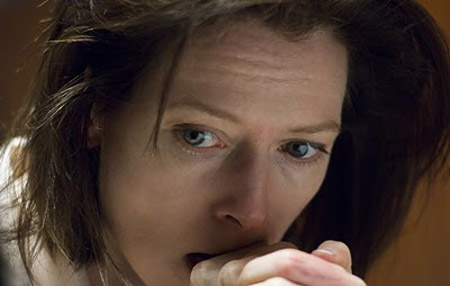 The same applies to all the main players in "Michael Clayton." Karen Crowder (Swinton) is general counsel for the multi-billion dollar company but this hardly makes her the image of confidence. She doesn't dispatch her villainous order with the intention of being evil; instead, her actions are purely those of someone who finds herself cornered. The decision comes up spontaneously while gong back and forth with her own problem solver about their options, and we watch as they conclude there's no other way to go about this particular problem; they don't even need to say the word "murder."

After their hit is successful, a new fire breaks out and a second execution is required (though I have a hard time understanding how they thought they could avoid suspicion from the first murder). Then the irony of unpredictability is used to great effect by Gilroy as earlier in the movie Michael's child casually shows him a book with the picture of a landscape that eventually will make him stop and get out of his car at this crucial moment which is shown twice on screen: the first time at the beginning when we don't quite understand what's going on, the second near the end in which we have all the pieces and can finally grasp how such a beautiful yet seemingly simple scene of three horses at dawn could end up representing the climatic moment of this film. 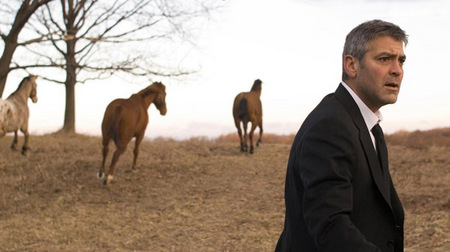 "Michael Clayton" has a murder scene unlike any other I can recall: the death of Tom Wilkinson's character. The cinematography involved is as ambitious as the Copacabana montage in "GoodFellas" (1990) (though not quiet as flashy). Here we have a two-minute, one-take shot with several complex actions done by three people with the camera following them all around an apartment. Very little dialogue is involved but through the acting and directing untold stories come out. In the knowledge of these characters about how to avoid suspicion, we conclude this likely isn't their first kill. Yet somehow we get the feeling they never set out to become hit-men in the first place and instead, much like in Michael Clayton's career, one thing likely led to another.

Few pictures in recent movie history have provided us with so many great performances across the board, and they are instrumental in helping us fully appreciate the dimension of the occurrences depicted here -- but in the final analysis I think "Michael Clayton" biggest achievement was being able to provide the entertainment level that few thrillers are ever able to accomplish these days (much like "The Firm" did the 90s) while simultaneously becoming a great movie in its own right.