Memo to Spielberg: Hands off "Jaws!" 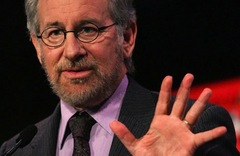 Recent years have seen the world's two most successful film directors in history do the unthinkable by tinkering with some of their most classic work.

First up George Lucas decided to update his original "Star Wars" trilogy, I imagine with the purpose of standardizing its look with the new three films he was working on at the time.

Then the great Steven Spielberg thought it would be a good idea to update some special effects in his classic movie "E.T. The Extra-Terrestrial" by substituting some shots of his timeless creature with CGI. He also made it more politically correct by replacing guns depicted around children with walkie-talkies.

All noble goals, but this was about as appealing to me as the colorization of "Casablanca" was to Siskel & Ebert. The end result for fans of these movies: the new scenes stuck like a sore thumb, making it impossible to watch them without taking your eyes off the screen constantly.

A movie has to be seen as a reflection of its time, there are no two ways about this. You don't put arms on the Venus de Milo in order to improve it. If you don't like how your movie looks today, start again from scratch.......or maybe not (more on that later).

When CGI came out in the early 1990s, didn't we all think the sky was the limit? If Steven Spielberg could make a convincing dinosaur, what couldn't be achieved? Well, after almost two decades in which for every work of art such as "Avatar" or the "Lord of the Rings," we've had to endure, say, James Bond surfing over giant waves in "Die Another Day"; the endless cheesy waters from "2012"; Jar Jar Binks sticking his tongue into racepods and super-intelligent sharks swimming like sardines in "Deep Blue Sea", among others.

My general conclusions about CGI:

1) With rare exceptions, it is much more effective at enhancing or modifying a scene than creating one altogether. Just think how well the deserted streets of New York looked in "I am Legend" and how badly the superhuman zombies looked in that very same film.

2) So many directors in Hollywood simply get carried away with it. It's like they first think on what the technology can do, rather than how to use it to fulfill their vision.

3) A bad CGI shot has the power to awake us from the magic spell of an otherwise good film, and ruin it.

4) CGI is not good enough to exempt directors from the cardinal rule of never using the same trick twice , otherwise the audience will eventually catch it.

And then there's the issue of remakes, the easiest way to produce a movie today in Hollywood with a fairly precise idea what the first weekend gross will be. In other words, every studio executive's golden dream.

Are they always terrible? Of course not, not as long as they are born from an intent to give a story something that couldn't be achieved the first time around. It also helps if these limitations made the movie fall short in its potential. Other than that, I see no sense in remaking great movies, that's what home video was designed for.

My personal nightmare is opening up the IMDB one morning and learning Steven Spielberg has agreed to do a remake of "Jaws," my favorite all-time film, or even worst, allow somebody else to do it. Hence, my personal "open letter" plea to Steven Spielberg to never allow this, in the form of this video. Maybe I'm being paranoid, maybe that colorful remake of "Psycho" (1960) years ago told me all bets are off....