Mapping Out the Line 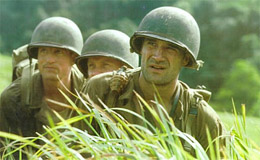 Terrence Malick's return to movie-making in 1998, preceded by a twenty-year period of largely mysterious retreat, was a tremendous event, the result of which - "The Thin Red Line" - exceeded any expectations one might have had at the time. I can still recall four consecutive evenings in early 1999, when I watched the movie repeatedly at the local cinema in my Polish hometown of Tarnowskie Góry. The first screening was so moving, I felt entranced and compelled to come back the next evening - and the next, and the one after that.

Since this was an era before DVDs took hold in Poland, I felt I needed to see the film as many times as possible in order to satiate myself with its glorious wide-screen cinematography, before it ended up cropped into a VHS version (ruthlessly "formatted to fit my screen"). Those four screenings I attended as a sixteen-year-old high school student - each one ending late at night and making my dad pick me up at an unusual hour - had a powerful effect on me, making me want to explore Terrence Malick's creative method and analyze what I still consider to be his masterpiece.

Many of my friends became Malick converts only after "The Tree of Life", but I never understood how a director's weakest film can be praised over his masterpiece. What was beautiful and delicate in "Line...", became blatantly (at times embarrassingly) obvious in "Tree...". Flights of poetic fancy can work only when rooted in down-to-earth physical reality, and that's exactly what happens in "The Thin Red Line". It starts off with the unbearable realities of World War Two (with its blood, stench and guts flying all over South Pacific islands) and laces them with a sense of acute metaphysical longing. Horror and beauty are intertwined in the movie to a degree unseen before or since, and manage to rise above its gritty source material, namely the 1962 James Jones' novel by the same title.

To a surprising degree, Malick eschews topical references, ethnic details, historical context and patriotic overtones (which have been common elements in traditional war films), and instead pursues radically different goals. In fact, it takes at least 10 minutes of screen time to identify the historical period the film is taking place in. It is thanks to this willful timelessness that the main poetic device of the movie - the multi-layered voice-over, delivered as if by a collective consciousness of the fighting American soldiers - doesn't strike one as artificial. 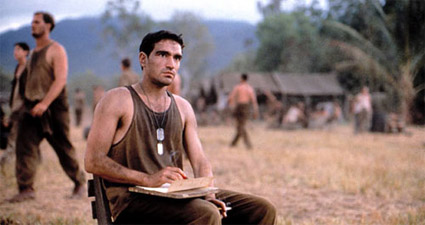 As I said, over the years I became obsessed with the film. I watched it many times on VHS, then on DVD and recently I caught with its Blu-ray edition, which gave justice to John Toll's camera work in a stunning fashion. Last year, I attended a Polish film festival which showed the old Polish prints of "The Thin Red Line" and I ended up attending all three screenings offered in the program (even the spelling mistakes in the Polish subtitles, along with tiny splotches of dirt that kept reappearing around them, became my friends over the years).

One collateral of my obsession is that I became an avid reader of James Jones, which helped me realize something that I still believe to be my personal discovery (I never ran across an article that would make the same observation, but I'm open to being corrected). Namely, the movie is based upon more than a single Jones' book. There are links in it to his other work, as well. In fact, Jones himself hinted at some intricate connections between what he considered to be his war trilogy, and in a 1973 letter to one R. Stanley Hegge he noted:

"You are one of the few people who has caught the hidden connection - i.e. Warden [of "From Here to Eternity"] becoming Welsh [of "The Thin Red Line"]; Prewitt [of "From Here to Eternity"] becoming Witt [of "The Thin Red Line"]. In fact, both do survive at least in the combat part of the War. Both will be re-appearing again in still another book, entitled "Whistle".

Now, what I discovered through multiple screenings of the movie and a close reading of Jones' books, is that Malick himself caught on those connections and incorporated them into his film. Instances of conversations being interrupted with the characters' dissenting views of one another, like in the scene Nick Nolte has with John Travolta at the beginning of the film, are taken not from Jones' "The Thin Red Line" at all, but straight out of "From Here to Eternity".

What's more, the whole concept of having Jim Caviezel's mystical-minded Witt pitted against Sean Penn's cynical Welsh is completely at odds with how these characters were portrayed in the book, but stays in accordance to the dynamics between Prewitt and Warden in "Eternity..." ("They were like two philosophers starting from the same initial premise of life and each, by irrefutable argument, arriving at a diametrically opposite conclusion").

The subtle play that Malick engages in with Jones' work goes very far indeed, which can be even observed on the level of subtle word choices he makes in his script. Consider this passage from Jones' "Eternity...", which refers to Prewitt's memories of his mother's death:

He wondered often (...) about his own death, how it would come, how would it feel, what it would be like to know that this breath, now, was the last one. (...) He only hoped he would meet it with the same magnificent indifference with which she who had been his mother met it. Because it was there, he felt, that the immortality he had not seen was hidden.

Here is the way in which Jim Caviezel's Witt recollects the same event in Malick's film:

I wondered how it'd be when I died. What it'd be like to know that this breath now was the last one you was ever gonna draw. I just hope I can meet it in the same way she did, with the same... calm. Because that's where it's hidden, the immortality I hadn't seen.

One can say that the entire Malick sensibility - if not his deep religious conviction - is packed into that tiny word shift. "Calm" instead of "magnificent indifference" marks the distance between a deep engagement with the spiritual world (of which Malick's film is a testimony) and a stoical refusal to be puzzled by it. "The Thin Red Line" is a religious work in that it's interested in how a human being relates to eternity, and I think its beauty goes well beyond any sense of order that could be offered by an organized religion. It is at instances like that when movies seem to truly mean the world to us, and I guess my sixteen-year-old self sensed it right.