"Magicians: Life in the Impossible" at Hollywood's Magic Castle

Timing is everything, with both magic and movies. Documentary "Magicians: Life in the Impossible" might have had a bigger, splashier opening if it had opened a year ago. The new film, which began through one director's connections at the Magic Castle in Hollywood, ended its premiere event there on a Tuesday evening.

The Magic Castle was originally built as a banker's mansion in 1809 when the land was still mostly fields and before the movie industry moved in. By the time Milt Larsen and his brother Bill bought the building in 1962, it had been partitioned into a maze of small apartments. Bill was a magician as their father had been and with the help of generous friends, Bill and Milt officially opening the Magic Castle on January 2, 1963 as an exclusive private clubhouse for members of The Academy of Magical Arts. Now the Castle is a few blocks north from Jimmy Kimmel's studio, Disney's El Capitan and the famous TCL Chinese Theatre.

"Magicians: Life in the Impossible" is in many ways a tragic love story—sometimes romantic love but always love of the applause and the con. Directed by Christoph Baaden ("Human") and Marcie Hume, "Magicians" began with Hume's interest in magic and magicians. A member of The Magic Castle, Hume looked at the membership and found four world-class magicians to follow over four years: Jon Armstrong, winner of the "Close Up Magician Aware of the Year" and chairman of the board of trustees at the Magic Castle; Brian Gillis, Johnny Carson's favorite magician; David Minkin, an award-winning magician who co-starred on the two-part Travel Channel special "Magic Outlaws," and German illusionist Jan Rouven and his manager/partner/husband Frank Alfter, who was a Las Vegas magician on the rise.

The focus is narrow—on white men of different ages with a sidetrack to Gillis' performance partner, Sisuepahn. Rouven and Alfter, who are now married but separated, found each other through magic. Another magician admits he's gotten dates because magic is a good ice-breaker. Being a good magician is also about seducing people into being your temporary friend, breaking through the usual layers of distrust.

What comes through clearly is the precarious nature of life as a magician. It's all about the hustle, the continual charming and conning of audiences. Gillis was once at the top, entertaining for Johnny Carson on the “Tonight Show.” Now he's losing his own castle and playing smaller crowds. 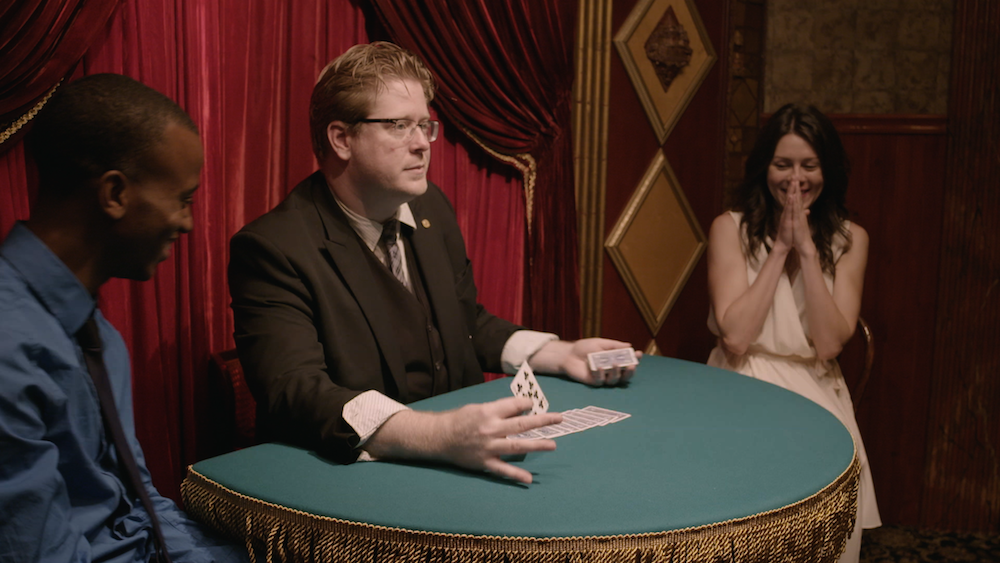 Jon Armstrong is on the road so much he has a hard time maintaining a relationship. He marries but the marriage unravels quickly off-screen. He's worked on films and TV and he's the co-creator of the IDW comic series "Smoke and Mirrors." We see him at San Diego Comic-Con which, as far as comic conventions go, is the big one. He drives himself to small gigs. He teaches others how to perform and sells instructional merchandise. He's relatively young, but has accomplished all of his life goals.

David Minkin is hoping that the TV show will open up new avenues for him. He's optimistic, but viewers have to weigh both Armstrong and Minkin against Gillis. Minkin hosts magic and wine shows, but there's always a danger in mixing alcohol with any show. Even small shows can be frustrating. During the documentary Minkin also faces the aging of one of his two dogs, Cosmo.

While some prefer intimate shows, there's another side of magic—the big show with lots of stage hands, technically intricate large props, smoke and mirrors—the kind of show that plays to big houses in Las Vegas. Jan Rouven is a young German man who was discovered and trained by his partner in business and life, Frank Alfter. Rouven makes it to Las Vegas and near the end of the documentary, gets a contract with the Tropicana, but don't look for him there.

Rouven is proof there is such as thing as bad publicity and his fall from grace is what has likely muted the launch of this documentary. During the Q&A, the directors brought up that Rouven faced serious charges.

Rouven was arrested in March of this year on federal charges but had been under FBI investigation for months. The documentary premiered at Hot Docs in April and the directors found out about Rouven's arrest days beforehand. They admit that they were completely blindsided by the charges. On November 15th, the film premiered at the Vista and was simultaneously released the same day on a variety of streaming platforms.

Rouven then pleaded guilty to charges of possession, receipt and distribution of child pornography on Thursday, November 17. He may face a maximum of 20 years and a minimum of five. Sentencing is scheduled for March. According to the Las Vegas Review Journal, after serving his sentence, Rouven will be deported. His husband has already returned to Germany.

With Rouven's disgrace complete, "Magicians: Life in the Impossible" becomes a curious relic. It might have made Rouven more well known outside of Vegas. His spacious Las Vegas villa deeply contrasted the downsizing of Gillis' life.

In the end, most magicians won't make the big time on the Las Vegas strip or as the favorite of a national TV show host. Most will remain humble practitioners always looking for an audience and always trying disarm you with a quick smile and a friendly word. They won't win awards or be the subject of a documentary; they do it for the love of magic and its effects on their audiences.

The Magic Castle celebrates all types of magicians, the ones who make a precarious living as illusionists, the ones who only entertain friends, and the ones who, like the late Dean Dill (1947-2015), made his Glendale barber shop a magical place. You almost wish the documentary had captured someone like Dill. Still, "Magicians: Life in the Impossible" does give you a better appreciation for magicians and may make you wish for a little more magic in your life.