You ought to check out otters! From time to time, I've been checking out the live cam that surveys the Elkhorn Slough in channels of the largest salt marsh on California’s central coast. On a good day, I’ll see an otter. On a better day, I’ll see two. Some days, like today, I see none. Other times I’ll watch the mesmerizing jellyfish cam on the "Big Blue Live" home page. Even nearly two months after the event, I’m left with a smile.

For people who love nature, what could be better than a collaboration between the BBC and PBS? The two came together for an international event: “Big Blue Live,” a multi-platform event centering on Monterey Bay, California with a two three-day broadcast, first in the UK (August 23, 27 and 30) and then just this week (August 31 - September 2) in the U.S. Viewers witnessed as one of the hosts/correspondents, Dr. M. Sanjayan, noted one of the greatest comebacks in conservation history during the greatest gathering of marine mammals in the world. I laughed, I cried, and, at the end, I wanted to know more and was filled with hope.

Monterey Bay is about 320 miles north of Los Angeles and 120 miles south of San Francisco. “Big Blue Live” is a story that oddly might not have happened without the European educational system and American sexism. Film fans might be somewhat familiar with the National Marine Sanctuary and the Monterey Bay Aquarium. The aquarium was one of the 19 filming locations for the 1986 “Star Trek IV: The Voyage Home” as the home of two humpback whales, Gracie and George. Next year, Pixar’s “Finding Dory,” is partially set in a fictional marine institute in Monterey. While San Diego’s Sea World is having PR problems after the documentary “Blackfish,” Monterey’s sanctuary and aquarium is not. 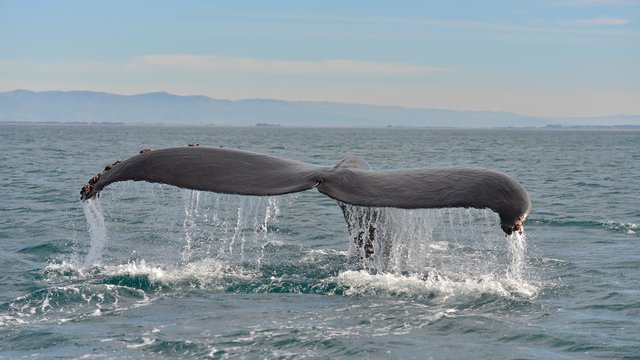 “Big Blue Live” brought together scientists, filmmakers, photographers, animal behaviorists and local spotters to document the once-a-year marine animal phenomenon when humpback whales, blue whales, sea lions, dolphins, sea otters, great white sharks and more congregate during the migrations at the deep waters off of Monterey Bay. Dr. M. Sanjayan is the host of the PBS series “Earth: A New Wild,” and is currently the senior scientist at the Conservation International. His co-host is science broadcast journalists Liz Bonnin, who was on the BBC science programs “Bang Goes the Theory” and “Stargazing Live.” Other correspondents include Dr. Joy Reidenberg who hosts “Sex in the Wild,” Steve Backshall of BBC’s “Deadly 60” and Matt Baker of the BBC daily magazine program “The One Show.”

Part of the episodes were live, but other parts were previously recorded earlier in the year, including segments of humpback whales in Baja California. The three one-hour episodes are not for the squeamish or deeply tender-hearted. In the first episode, an eyeball is found floating—most likely the remnants of a killer whale giant squid meal. Kids might squeal with delight at the slimy find. In other segments, you’ll see a harbor seal cornered and eventually killed by two killer whales and a dolphin tossed into the air by an orca, before it becomes a tasty tidbit for an orca pod. These killer whales are shown as less Sea World-kissy and more in tune with their names. Of course, seals and sea lions have to beware of other predators like sharks and we are also shown evidence of pinnipeds who survived such encounters.

A more life-affirming segment features Pieter Folkens of the Alaska Whale Foundation who followed a whale to the Channel Islands National Marine Sanctuary on the boat Shearwater, and with colleagues Keith Yip, Dave Beezer, and California Stranding Coordinator Justin Viezbicke helped disentangle a whale’s fluke from a crab trap. The wound is deep but we also see the recovered whale’s fluke. Folkens reported that the whale was seen a few weeks later with the wound mostly healed, but entanglements are becoming an increasing problem with 64 entanglements reported this year already. 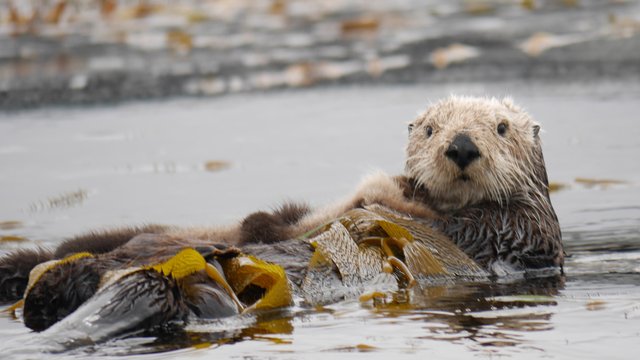 There is much to celebrate. We learn that the viewer-favorites (based on Twitter votes from both coasts)—the sea otters—are considered a keystone species. “They alter and change the entire ecology of this bay,” Sanjayan noted. They were thought to be extinct until a small group was found in Bixby Creek 80 years ago. Without the sea otters to control their numbers, the sea urchins and abalone killed all the kelp forests. Without the kelp forests, the fish didn’t come and attract the sea lions and elephant seals.

Three otters particularly captured the hearts of audience members: Otter 696 and Bixby with her five-week-old female pup. Otter 696 is named so as the 696th orphaned otter taken in by the sanctuary to be raised and released with some help from surrogate mother otters.

In other segments, Backshall dives with sea lions and Reidenberg clues us in on the anatomical features that allow the sea lion to spot its prey and dive deep while conserving oxygen. The anatomy of the shark and whales are also discussed. We also learn about the super commuter: the sooty shearwater birds who migrate from New Zealand (Māori name tītī) to Monterey and dive deep to catch their meals. The cinematography here is really awe-inspiring.

In the last episode, we briefly get introduced to the woman who began the restoration of Monterey Bay: Julia Barlow Platt (1857-1935). She’s credited as the woman who saved Monterey Bay after hunters had killed all the otters and the canneries had left the bay polluted.

After studying at Harvard University, she went to Freiburg, Germany to get her doctorate because as a woman, she wasn’t permitted to receive a doctorate in marine biology in the U.S. On her return, she could not get a university position, but said, “If I cannot obtain the work I wish, then I must take up with the next best.” At age 74, she became the mayor of Pacific Grove, California, a city just two miles away from Monterey. There, she set up a marine sanctuary which was considered crucial in bringing back the sea otter.

If you missed the “Big Blue Live,” you can still watch the three one-hour episodes online by visiting the Big Blue Live social hub for PBS or the BBC Big Blue Live webpage. The BBC webpage also has six live webcams: three are from Monterey Bay and three are from explore.org (Cape Fear shark cam, Walrus Alaska cam and Grand Cayman Reef cam). We hear so much gloom and doom about our environment, as echoed in so many post-apocalyptic sci-fi movies. But Monterey Bay is one of the amazing success stories of modern times, one that leaves viewers filled with enthusiasm and hope. A woman saved the otters, and the otters saved Monterey Bay.