"Kill Bill" and the love of cinema 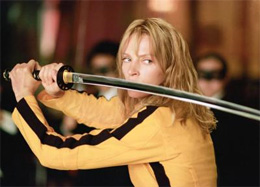 It's hard to come up with many directors willing to take the leaps of faith that Quentin Tarantino does in every scene of his every movie. It's even harder to come up with any who have the talent to back-up even trying. The biggest reason Tarantino has such a huge following may be how he goes all-out with seemingly little or no concern for crashing -- which, amazingly, he never seems to do.

This idea of the fearless filmmaker brings to mind a picture I watched last year called at Ebertfest called "You, the Living," in which Roy Andersson spends 90 minutes throwing twenty-some vignettes at the audience with a certain attitude of indifference as to whether they catch the humor in them or not. In some cases you end up laughing out loud; in others you find yourself cringing out of concern for the guy. That these kinds of doubts never cross our minds while watching a movie by Tarantino tells you everything you need to know about him. One would not advise anybody to choose this same approach, as for most it would be like trying to fly without wings.

Everyone who knows a little about the history of "Kill Bill" is well aware that the film was split in two. The introduction to the first volume refers it as "Quentin Tarantino's fourth film" but this detail was omitted in the second, so it's evident that the director considers it a single entity (and so do we for reviewing purposes). Still, the halves couldn't be more different, which makes it hard to blame Tarantino for splitting them in the first place. The first part is basically an homage to the martial arts films he loves, the second one to Spaghetti Westerns (among other genres), and together they chronicle a woman's long "roaring rampage of revenge" against the team responsible for a massacre at her wedding and putting her in a coma. Even though "Kill Bill" it is made up of only nine, seemingly simple chapters, Tarantino (as usual) can't help but avoid telling them in a straight-ahead way. As the Hanzo character says: "the road to revenge is never a straight line." No road ever seems to be with this guy.

The characters of "Kill Bill" aren't precisely three-dimensional, nor should they be. Regardless of their diverse races, cultures and genders, their common denominator is that their words feel like they spring directly from Tarantino himself, which means they are all great cinematic personalities. The otherwise valid notion (from my "Michael Clayton" review) that a movie is better if its characters speak as if an individual writer had worked on each part, just doesn't apply here.

The assassination squad girls' personal descriptions don't require too much detail: they are all great looking, great at fighting, and even better at snappy comebacks. Each new one we meet seems more menacing than the one before (as usual in these kinds of movies). Each has a deadly specialty. The leading role belongs to Uma Thurman's Barbara Kiddo, aka "Black Mamba," a woman of few notes but enough eccentricities and funny quirks that make it easy to cheer for her. Thurman has been referred as Tarantino's muse, and what's evident on-screen is his unusual fixation with her -- revealed by the countless close-up of her face and (somewhat) odd hands/feet. 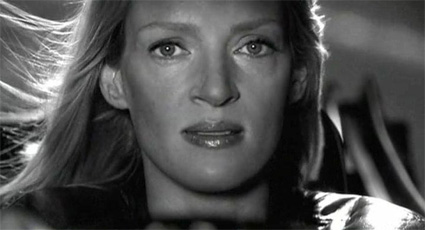 Daryl Hannah's Elle is the meanest woman in this or just about any other movie in memory, enough to make you feel sympathy for the cruelest of Kung-Fu masters (Pai Mei) who falls victim to her poisoned "fish-heads." Her eventual fate will be just as gruesome as that which Kiddo barely eludes a little earlier and Hannah plays it in a way that leaves us thoroughly unsettled: the delicate mermaid from "Splash" is erased into oblivion with her over-the-top performance here. The other two hit-girls are Vivica A. Fox's Vernita Green (a homemaker on the side) and Lucy Liu's O-ren Ishii, the (occasionally) sweet boss of the Japanese mafia. 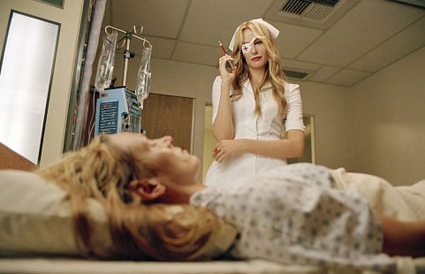 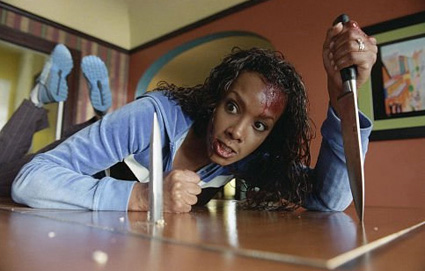 The title character, known simply as Bill, may be the devil incarnate but he's also the kindest and most considerate character in this film. He's never frivolous about the pain he inflicts but rather just can't seem to to help it. As hard as it is to imagine anybody but David Carradine playing him (especially for those of us who grew up watching "Kung Fu"), it seems to me that he is much more interesting in the earlier sections of the film when shown on screen only partially or briefly; once we see him in full, endlessly uttering his life philosophies and making sandwiches for his daughter, he ends up losing most of his aura. 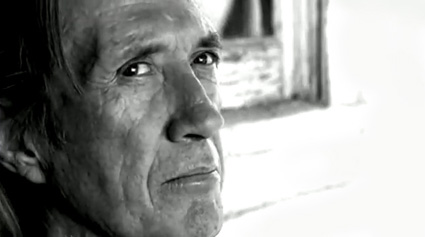 His brother Bud (no last name available either) initially seems like an under-achieving bouncer/janitor but Michael Madsen is able to convince us that such a lowlife can still be great at dispensing evil without getting too worked up, while even enjoying it (a task at which Madsen seems to succeed in so many of his roles). 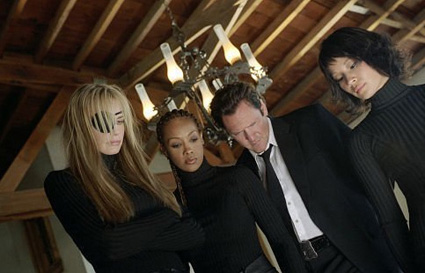 At the heart of "Kill Bill" are the sensational fight scenes, which begin right from the start with little explanation or character motivation, but this doesn't make them any less exciting. The clearest evidence of who exactly wrote this particular screenplay is the fact that the characters constantly talk before, during and after each one of these sequences. Throughout the four hour running time we see Kiddo facing dozens and dozens of opponents in several sequences but each one manages to be at least a little different from the one before. Each has its own little oddities (think of Thurman sizing up the competition by the reflection on her sword), which is why, even when she faces a team such as the "Crazy 88" in a scene consisting of more than 10 minutes of continuous action, it is never boring. 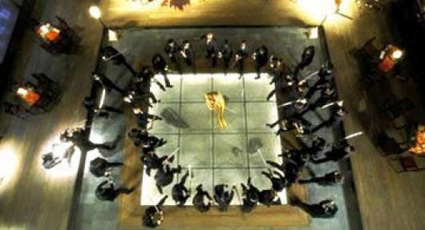 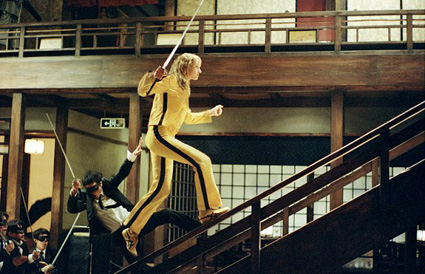 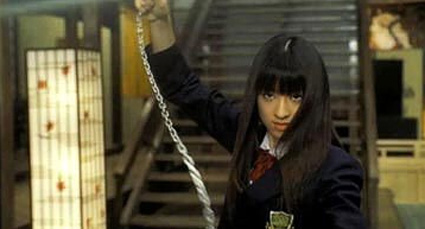 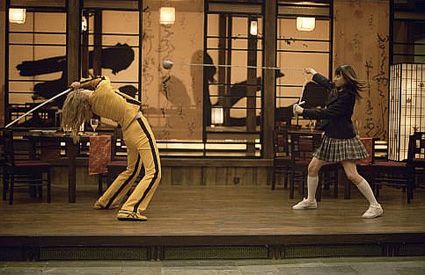 "Kill Bill" is a film of great and small scope. It has very elaborate scenes like the setting prior to the "Crazy 88" duel with its complicated, DePalma-esque overhead shots, and seemingly insignificant details such as the small artifact in the snowy fountain which emits a clanking sound when releasing water. They all add to the movie's flavor. Every cinematographic technique and style imaginable is used for specific purposes, be it B&W and shadow photography for making the fights more diverse and interesting, Animeé for toning down the ugliness in images of child brutality (and for entertainment's sake of course) and the use of unnatural color tones that give some parts a fantastic, dream-like feeling, as in the scene of a plane landing in Tokyo which on my first viewing made me question whether I was really in a conscious state. 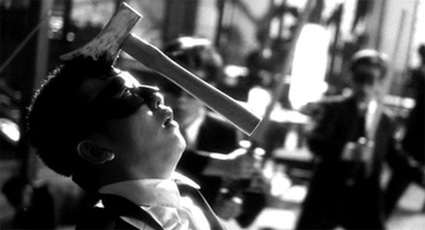 Numerous sound effects are also used to immerse the audience in the experience, ranging from the silliness of incredibly fast-moving humans (and a certain character's white beard) to the use of the surround sound that accentuates the claustrophobic feeling of what has to be the most painstakingly detailed depiction ever of a person being buried alive (done in real time, no less). The film also uses the constant repetition of wild tales to make them all the more fascinating, like the fabulous virtues of a Hatori Hanzo sword which, just like that infamous "Pulp Fiction" wallet, currently has some 55 copies listed on Ebay and, yes, for far less than a million dollars (the nice, round figure mentioned constantly in the movie).

I do believe "Kill Bill" has a big problem in its last chapter which is much too long, has too much dialogue, gives the audience more Bill than we really need and, after witnessing some of the most elaborate fight scenes ever put on screen, doesn't fulfill our expectations with what is supposed to be the main event, concluding the proceedings with a rather flat duel that lasts only a few seconds. The whole México sequence feels like an altogether different movie and is not at the same level with the rest of the chapters, but that doesn't hurt the film so much that it can no longer be considered great.

I often wonder how any director could have gotten away with material as offensive as that in "Kill Bill." Here we have images depicting extreme violence in front of a child, the abuse of a comatose woman by a hospital orderly and even an animated shot of child abuse (to name a few), yet Tarantino always seems to get a free pass from most of his audience. The reason might be that the whole enterprise avoids taking itself even remotely seriously and its humor always succeeds in being right on target. Tarantino can make an homage to what basically are countless "B" movies and always find a way to raise them to an altogether higher level. These abilities set Tarantino apart from just about any other director working today. I'm sure he enjoys the fame and fortune his films have brought him but what's most evident while watching "Kill Bill" is a sense of a filmmaker working for the love of making great cinema.