Haskell Wexler and "The Bus"

Growing up in the '60s in Kewanee, a comfortable small town of 16,000 in central Illinois, meant being surrounded by similarity. Mostly white people, with the largest minority group Polish immigrants. There were a handful of Jewish families, who had to drive 100 miles roundtrip to Peoria if they wanted to attend temple, and a few dozen African-American families.

That world was so insular that, when my parents married in 1950, my dad's grandmother conﬁded to my mom, "We've never had a non-Methodist in the family before!" This was hurtful and very opposite the way my mother, Beverly Jones White, attempted to live throughout her life. Trained in American history, with a deep belief in the tenet that "All men are created equal," she raised 3 kids with a central lesson I've treasured ever since: "You are not better than anyone else. You are quite fortunate to live in a world which favors light skin and Protestantism…" (even Catholics in that time were often looked down on) "…and the opportunities a little more money brings…But you are never, ever to act better or think that you are."

I've always believed that without the responsibility of young children, my mother would have joined the 1963 March on Washington, where Dr. King gave his riveting "I Have a Dream" speech before 250,000 Americans of every race. Or perhaps she'd have been to Mississippi in 1964 for Freedom Summer. I remember her horror when 3 civil rights workers, James Earl Chaney, Andrew Goodman and Michael Schwerner, were lynched and tossed in a river in Mississippi, and when Viola Liuzzo, a Unitarian minister and housewife from Detroit, was murdered by the Ku Klux Klan in Alabama. Mom used these outrages as lessons, bringing us as close to current events and the importance of civil and human rights as she could from the safety of central Illinois.

August 28th marks the 50th anniversary of that crucial March on Washington. As a slew of stories and reports recount that remarkable event and era, "Time" magazine has produced a special video of the event. One highlight: portions of a short ﬁlm called "The Bus" by the great cinematographer Haskell Wexler, who was both an chronicler and participant in those events. (You can watch it at the end of this post.) Shot in black and white, the ﬁlm takes the viewer along on the ride, enabling one to experience something of the time, as Wexler films a bus of attendees—black, white, Jewish, Christian and most likely even atheist—traveling together from San Francisco to lend their bodies to a great cause and to be part of history in Washington. One sequence has an African-American woman asking a woman close in age, but Caucasian, just what she would do if her husband were being attacked. Wouldn't she intervene or even ﬁght back? This on a bus ﬁlled with people committed to non-violent action puts the dilemma in a powerful light. (I'm going to avoid a "spoiler" here so you can watch this moving conversation yourself.) 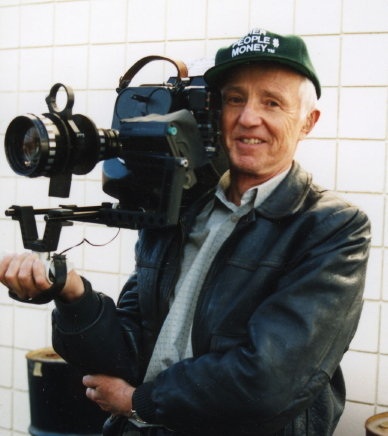 Born into a Jewish family in Chicago, Wexler, served in WWII and attended UC/Berkeley before becoming a cameraman. Throughout his more than 60 years in ﬁlm, Wexler has made Emmy-winning documentaries and TV shows along with the stellar feature work for which he's best known. Credited as the DP (Director of Photography) on 76 features, including "In the Heat of the Night" (1967) and "One Flew Over the Cuckoo's Nest" (1975), he's won Oscars for cinematography on "Who's Afraid of Virginia Woolf?" (1966) and "
Advertisement
Bound for Glory" (1976). In 1993 he was chosen for the ﬁrst Lifetime Achievement Award given by his guild, the American Society of Cinematographers. And in April he was an honored guest at the 2013 Ebertfest in Urbana/Champaign, Illinois.

Emblematic of his lifelong commitment to civil and human rights is the extraordinary feature (a docudrama before there was a term): "Medium Cool" (1969), which he wrote, directed and shot at the 1968 Democratic Convention in Chicago. Capturing the uproar and pain of that time of protest, that ﬁlm has inﬂuenced several generations of ﬁlmmakers around the world and retains its passion even today.

That commitment has marked Haskell Wexler's life. Now 91, he still evinces that ﬁre in the belly, continuing to shoot and write and teach while also advocating for "12 On 12 Off," an industry group which lobbies vociferously for reasonable safety and humane working hours for professionals working in ﬁlm and television.