“Spa Night” takes place in the middle of a Los Angeles ethnic community area both familiar and foreign to me. As this exceptional independent movie let me assess its intimate details with curiosity and amusement, I was involved in its somber character drama, and I found myself touched by its young, closeted hero’s inner conflicts.

When we meet David (Joe Seo) for the first time, everything looks fine for this Korean American lad and his parents Jin (Youn Ho Cho) and Soyoung (Haerry Kim). They are at a spa located somewhere in the Koreatown neighborhood of L.A., and the opening scene shows David and Jin going through what I and my father usually do at our neighborhood spa: sweating in steamy sauna, scrubbing each other’s body and having some rest later.

In the common lounge, they join Soyoung, who says she would love to be accompanied with her future daughter-in-law. I nodded at her words with amused recognition during the screening at the 2016 Jeonju International Film Festival. Due to my bachelor status, my own mother incessantly says similar things to me whenever we happen to have a private conversation between us. Like David, I have no choice but to behave like a dutiful, obedient son on the surface even though I have no particular interest in dating, let alone marriage.

It turns out David’s parents are having a serious problem. Their small Korean restaurant, which looks as old-fashioned as some of shabby restaurants I know in South Korea, has been declining in its business, so they eventually decide to close the restaurant. When she talks about this to her friend during their weekend church service, Soyoung emphasizes that her family are all right with this change, though it is just for keeping their appearance in front of her friend and other neighbors.

In spite of their difficult financial situation, David’s parents still hope that their only son will go to college someday (and marry someone and then move out to have his own family, of course). They enroll David in a recommended private prep school which may improve his SAT scores, which should be far higher if he really wants to go to a good college like the University of South California. Although he does not seem to be that eager for higher learning now, David begins his SAT study as his parents want and expect, and he also spends a few days in the USC campus.

As we watch more of David’s mundane daily life, the movie gradually reveals his other private matter. After he and his old childhood friend have a boozy night along with several other young Korean Americans, they go to a neighborhood spa for detox, and David becomes more conscious of his homosexuality than before. He soon gets a part-time job there. While doing his menial work around hot/cold pools, shower booths, saunas and a sleeping room, he sometimes sees customers satisfying their private urges with others in corners. 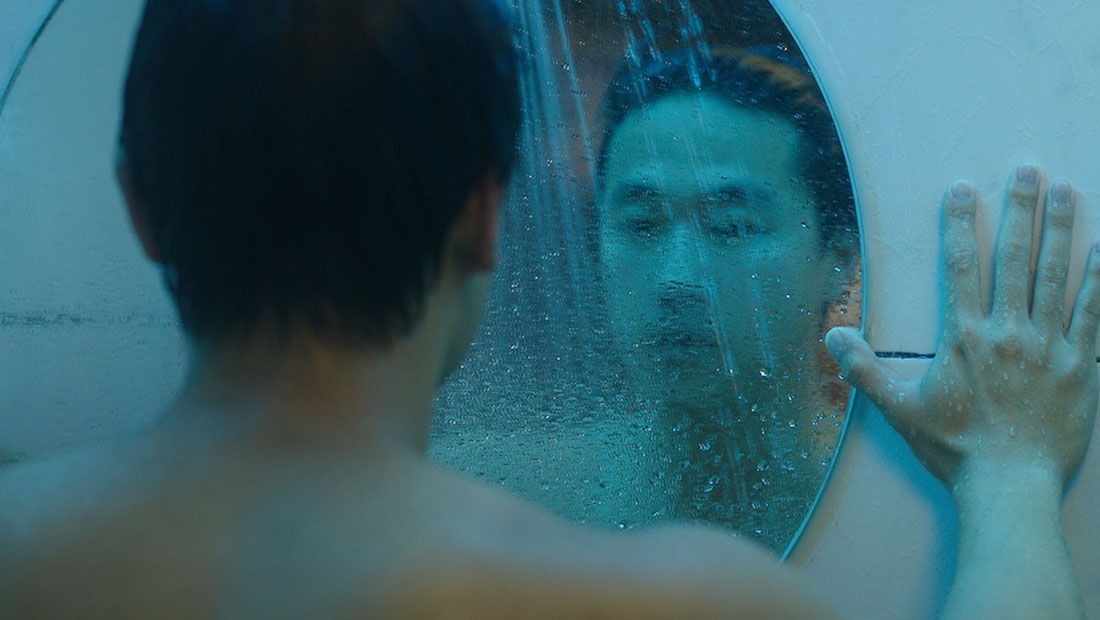 There is a certain amount of tension as David does not say anything about his job to his parents, but the movie is mostly driven by individual personal moments rather than conventional plot. Director/writer Andrew Ahn handles his story with admirable sensitivity and restraint. The locations in the film feel authentic with cultural details I would love to explain to you, and they certainly make distinctive impressions along with the urban landscapes of L.A. As far as I can remember, the main cast members handle their frequent Korean dialogues without much awkwardness, and I must say that some of indoor scenes in the film almost feel as if they had been shot in South Korea instead of America.

Considering his same double minority background, I guess Ahn experienced difficult things not so far from what is shown in his film. Besides David’s conservative Christian family background—which can be compared to the similar background of Dee Rees’s lesbian coming-of-age drama “Pariah” (2011)—other young Korean Americans’ insensitive attitudes towards homosexuality is another inhibitory factor for David, as shown from when he has to join their crude "dare-to-kiss" game in a karaoke room. While observing how unhappy he has been without anyone to understand his sexuality, we come to sense more of the invisible gap between him and others including his parents, though he and his parents do love and care about each other.

There is a small scene in which David and his parents attend their relative’s traditional party for a one-year-old baby, which instantly took me back to Ahn’s short film “Dol” (2011), which I fortunately encountered thanks to a South Korean critic acquaintance around three years ago. It is about a young Korean American man attending that traditional baby party, called "Dol party," along with his family. This autobiographical short subtly shows how much he feels isolated as a closeted gay man who has been hiding his current relationship from his family. As he confirmed to me after the screening of "Spa Night," Ahn had his own parents participate in the production of "Dol," but, maybe because he did his job too well, they did not realize their son’s intention even after they watched the final product (they do know now that their son is gay, by the way).

What was glimpsed from “Dol” is further developed under the low-key ambience of “Spa Night." The cinematographer Ki Jin Kim, who previously collaborated with Ahn in “Dol," conveys to us David’s emotionally constrained state via the effective use of widescreen composition, and the occasional close-up shots of bare male body parts constantly remind us of what is being stirred inside David. With many scenes unfolding at the spa, nudity comes with the territory, but it is simply presented as a plain part of daily spa business. Ahn told me about how he luckily found this nice place for his shooting, and, after hearing that it looks as good as shown in the film, I actually considered taking my parents there if I have a chance to visit L.A. with them.

Joe Seo, who was almost the last one to be auditioned right before the shooting (it was pretty hard for Ahn to find a Korean American actor who can speak Korean as fluently as he wanted), gives a gentle, likable lead performance balanced well with subdued intensity. When David finally takes a bold, active step around the finale, we are not surprised at all because we already sensed the buttons inside him bound to be pushed sooner or later. It is risky to say the least, but our brain tends to be oblivious to reason when everything clicks to trigger whatever is in our biologically programmed nature.

Youn Ho Cho and Haerry Kim are also good in their supporting roles, though Kim looks a little too young for her role (I hope she will take this negative comment as a compliment). Soyoung and Jin are not exactly perfect parents, but the movie depicts them with sympathy and understanding. Drinking even more than before due to his unemployment, Jin begins to show his worse sides, but the movie understands his wounded pride while never excusing his pathetic behaviors in front of his family. Kim has a sad scene in which Soyoung and David come across a place where she once lived with her husband during their first year in L.A.; she and Jin came to US for a better life like any other immigrants, but now they may have to recognize that their life was not as good as they once wished a long time ago.

Roger Ebert used to talk about how good movies can let us feel what it is like being someone different from us, and “Spa Night” qualifies for that because of its universal empathetic quality generated from specific human elements. Like its hero, the movie stays calm and distant throughout its 90 minutes, and I began to lose some of my patience during its last half hour which merely throws a typical unresolved ending with lots of uncertainty, but it is still a notable debut. During recent years, there have been lots of conversations revolving around the diversity in American movies, and, considering what is presented here in his film, I think Ahn is a new interesting filmmaker who may make significant contributions to the industry, one currently in urgent need of reflecting our social and racial changes.