In this list, we are exploring films that support an Israeli narrative. There are three components here: religion, persecution, and the modern state.

I have already addressed a major component of the religious narrative in the first entry in this series, by speaking about "The Ten Commandments." But, that film spoke of origins. For more, we should consider the following Biblical passage, Tehillim/Psalm 137, which holds special value for many people. It provided a cornerstone for American Civil Rights activists, speaking of the sorrows in searching for the Promised Land of equality and dignity. In the Feminist movement, Womanists (like Mujerista theologians) cite this passage while speaking as foreigners in a foreign land.  In the late 1970s, disco music fans from Europe to the Indian Subcontinent were introduced to this verse through the music of the Jamaican band Boney M. But, for many Jews, this passage guides a Jewish heart. Other passages like the Shema ("Hear me Oh Israel, Adonai is your Lord, your Lord is One.") might capture the foundations of Judaism itself, but this following set of verses draws us to a consciousness of living in exile: humanity exiled from the Divine in paradise, and the people exiled from their holy land, living in a broken world they are obliged to repair, that nevertheless might despise them.

By the rivers of Babylon, we sat down and we wept, when we remembered Zion. We hung up our lyres upon the willows there. For there they who took us captive required us to sing them a song; they who tormented us required joy from us, "Sing us one of the songs from Zion!"

How can we sing a song about the Divine here on foreign earth. If I forget you, Jerusalem, may my right hand wither! May my tongue stick to the roof of my mouth if I do not prefer Jerusalem above my chief joys.

Remember, oh Divine, against Edomites in the Day of the fall of Jerusalem, how they cried, "Raze it! Raze it! Tear down its foundation!" Oh daughters of Babylon, you will be destroyed! This will be a blessing on anyone who repays you for the way you treated us! A blessing on anyone who seizes your babies and smashes them against a rock!

With Moses’ death, his assistant Joshua delivered the Jewish people to Jerusalem. Generations later, when Nebuchadnezzar destroyed the first Temple in 587 BCE and expelled the Jews, the era of the Jewish Diaspora began. Among many places all over the world, two major centers of Jewish life eventually were in Europe: the Ashkenazim in Eastern Europe and the Sephardim in Spain.

The Jews lived in Muslim Spain in various levels of protection or expulsion, depending upon the particular administrations ruling. But, in that period, Jewish thought experienced one of its golden ages, with the star being Moses Maimonides. A few centuries later in 1492, in a period called The Reconquest, Catholic rulers of Spain began an Inquisition, wiping out and expelling Jews and Muslims, some Jews converted, remaining "secret" Jews, called Morranos (their Muslim equivalent were called Moriscos).  Some escaped into Europe. Others found refuge in Ottoman (Muslim) lands. The same period also saw the Spanish queen sponsor Christopher Columbus’ escapades across the globe.

In the subsequent centuries in Europe, witnessing the Renaissance, the Reformation, and the Enlightenment, the most common targets of insults and mockery were Jesus, the Pope, women, Africans, Muslims (usually as "Turks" and "Moors"), and especially the Jews. The modern Zionist movement began among secular European Jews in the 1800s. These Zionists were seeking an independent Jewish state as a safe haven.  What transpired half a century later elevated the need. 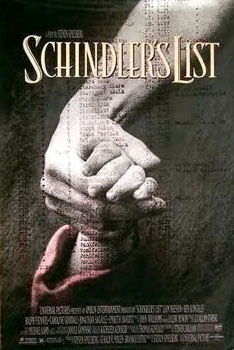 Spielberg’s film marked a major turning point in his career. Already the most successful director in Hollywood history, he introduced the Summer of 1993 with his largest film, "Jurassic Park." He ended the Fall of 1993 with his most important film, on the Holocaust and a complicated Nazi’s attempts to provide safety for many of the Jews, staving off extermination. The film begins in Krakow, Poland and ends at the graves of the "Schindler Jews" in Israel.

The Holocaust is the single most researched and documented event of the 20th Century, both through the meticulous details of the Nazis and later researchers’ attempts to make sense of the atrocities. There are those who call the Holocaust into question, asserting conspiracies behind its planning, while others deny genocide. Such stances are their own forms of violence, so it follows that the charlatans making such accusations are not trained historians, but political opportunists. In any case, it is odd (or telling) that the Holocaust took place in the same general land that produced some of the continent’s most important thinkers, including Immanuel Kant. Meaning, the possibility of a genocide was itself unthinkable, in such a supposedly enlightened, rational society. But, a lesson might be that a sharp mind does not imply an empathic heart.

Europe witnessed other genocides, including the killing of Polish Christians during the same Holocaust, the pogroms conducted under Stalin’s rule, and a more recent "ethnic cleansing" of the Bosnians. This period marked a necessary turning point in Western Jewish self-consciousness and organization, to make sure it never happens again.

The state of Israel received UN recognition a few years later. For some, provided that desperately needed shelter.  For others, especially after 1967, a lament of thousands of years finally ended. The exile was done, Jews scattered through the diaspora can now make Aliyah ascending back to their home. The experience of the modern state of Israel, however, is something a bit different, in the same way that the American narrative is romantic and passionate, while the American experience is full of nuts and bolts and challenges.

Both of the following films illustrate something that is lacking in the US: critical assessment, without risk of delegitimizing the state. In the previous entry in this series, I commented that Spielberg’s "Munich" is one rare exception. But, regardless of the political outcome, in the Israeli discourse there is debate. In addition, each of these films speak of at least three populations: the secular Left, the religious Right, and those in the middle somewhere. And, perhaps more fascinating for the American audience: except for a few moments in the second film, there is no concern for America: Israel strives to be its own nation. 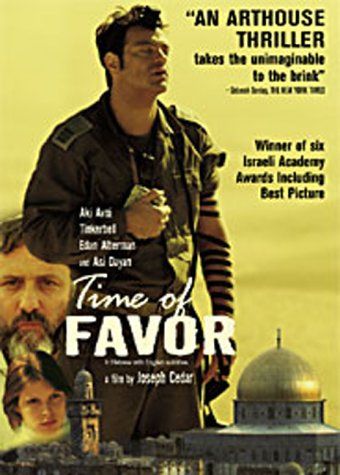 A radical preacher calls for the Jews to reclaim the their historical religious sanctuary, the Temple Mount. Two of his students are in competition. One is an Israeli Defense Forces soldier, who has witnessed destruction and is now going through an ideological shift to the Left. The other is a sharp-minded Right wing nationalist with a grudge, plotting to destroy the golden domed Muslim Dome of the Rock. So, who is the better student? Both love the teacher so much that they want to marry his daughter.  One, however, concentrates on the essence of his message, seeing metaphor where others see militancy. The other moves secretly toward fulfilling his mentor’s vision, seeing zeal where others see ideas.

Six former heads of the Israeli Secret Service speak about the struggles of protecting the State against all threats foreign and domestic, while answering to politicians who are usually more interested in votes than values. Director Dror Moreh mixes dramatic footage and foreboding music with interviews of men who have served their nation, but have also grown in other directions since then. Each of these men has his own arc of personal development, fitted in the film’s own trajectory. Near the beginning of the film, they speak of Palestinians as rabbits and cats, later as terrorists; in the end, they speak of Palestinians as necessary partners in peace. In between, they find one set of problems among the politicians, wanting simple binary answers to complicated scenarios. Another challenge grows among Palestinians demanding their own rights of existence, with many having given up on quietism and non-violence, in favor of various levels of aggression. A third threat is the contingent of various Right wing radical Jews, ready to not only protest, but plot their own violence, while the government lets them free.

There are other Israeli films worth watching, including the very human "Ushpizin" speaking of orthodox culture, the very clever "Ajami," and "Waltz with Bashir" speaking of memories on the war with Lebanon. But, here, we are looking at a particular dominant narrative, featuring scripture, history, and modernity. Some communities live in space, but the Jews live in time, and Israel is, for them, the nexus.

Next: Palestine and the Conclusion.