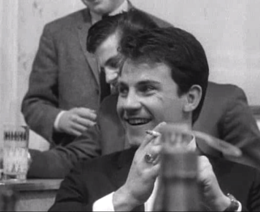 There exist in this sometimes sad world, moments that remind you that you are alive.

You know these moments well. Blood rushes from your toes to your cheeks. Or from your cheeks to your toes. Either way you are made aware of its movement.

A great energy is felt in your jaw and in the ends of each strand of hair. Your fingers curl. Your hands turn into fists or claws. Everything is hot. You shudder violently (the energy must be flung off or you will be eaten alive).

This all happens in two seconds. It is stunning.

There is a scene in Martin Scorsese's "Who's That Knocking at My Door?" (1967) that gives me this delicious sensation every-single-time-I-see-it. For four minutes and thirty seconds I am paralyzed with pleasure. A curious kind of paralysis. A mixture of sexual desire, odd violent inclinations, jealousy and tenderness.

Scorsese films populate the favorite movie section of the bro dude's Facebook page, the man remains a genius. One of the few commercially successful directors whose films always have a true visual dynamism. Maybe you have forgotten. It's easy to forget the actual artistry of popular directors (Spielberg uses the background TV like nobody's business), but return to their early works especially and you'll be reminded.

"Who's That Knocking at My Door?" is a movie about young aimless men, very much in the tradition of "I Vitelloni." One of these men is J.R. (Harey Keitel). J.R. wants to marry a girl (Zina Bethune). He discovers shehas been raped. This causes J.R. much grief. After struggling with intense Catholic guilt, he decides he's man enough to marry her. Unfortunately she is unimpressed with his attitude and turns him down.

In this video my review includes footage of the full scene:

The film isn't the most polished movie and as Scorsese's first feature it shouldn't be. It has the episodic feel and sound issues of a student film. At times it's more concerned with style and showcasing good music and witty lines than with actual characters or story, but this is exactly why I like it. Sometimes I want to see shots that thrill me in a simple, but powerful way through more of a pop lens. Scorsese or Tarantino over Tarkovsky or Dreyer. Sometimes I need to see three men arranged in a triangle in dark suits and skinny ties in a cloud of smoke and know immediately "this is supposed to be really cool." And it is.

I love raw masculinity. I love Doo Wop, and I love Coolness. Who understands the intricate fabric of all three better than Scorsese?

If you are a "mature" person, you have grown to appreciate responsibility over recklessness. Intellect over muscles. Sensitivity over nice hairdos. Stability over all.

If you have not yet reached the ballyhooed shores of maturity, you remain susceptible to the lure of The Cool. You know who the good ones are, but if we're talking pure undiluted sex appeal, you know that Steve McQueen is a little sexier than Danny Thomas.

You are a person most charmed by those dismissive of your attentions. The ones too busy drinking, smoking, or breaking things made out of glass to think about anything else. This is the whole point of coolness. Those who are cool cannot care, not even about life and living. So you are in love with the dangerous ones with no direction and no regard. You are in love with the bastards.

This sequence is full of them. 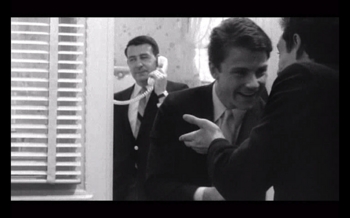 The scene itself is fairly simple and without dialogue. J.R and his friends have a boy's night. They drink, they laugh, they smoke, they play with a gun. The camera work is beautiful, as it it always is. The sequence consists of long slow motion tracking shots from left to right that dissolve into one another. The speed of each subsequent shot is increased so the scene almost imperceptibly works it's way from slow motion back into normal motion.

Scorsese understands music. He can find a song's secret darkness or brightness and apply it magically to a scene. The Ronettes "Be My Baby", for example, has a sound and rhythm for starting things, just like Junior Walker's "Shotgun" which breaks the spell of the slow motion sequence.

"El Watusi" on the other hand, is not a song for beginnings. It is a song for slow somethings.

Why does this song fit so perfectly with this sequence? As I watch the scene now I am doing a dance. It is a rather strange one involving the hips swinging side to side. It is languid but steady. This has something to do with it. Both the song and the scene have energy, but a languid energy. A steady sleepiness that undercuts the excitement. One that mirrors the true emptiness of the mens' lives. Maybe this is one reason the scene creates such an intense reaction.

I want to bolt forward.

To be part of the excitement.

To reach out and grab Harvey Keitel by the hair.

To go crazy with them behind the heavy slow motion curtain,

But the scene will never let me. I'm in a constant state of wanting.

Once the slow motion is done and I can reach for Harvey's head, the song and sequence are abruptly over. I am cast out of the warm, sleepy, pungent apartment into the decidedly not languid arms of Junior Walker. I am exhausted.

Worn out by extreme desire. Slayed by fantasy ravishing. 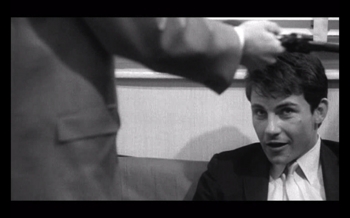 You may be a little sick of my duende references by now, but Scorsese has an inherent understanding of duende in music. He can sniff it out in the most unexpected places.

From Federico Garcia Lorca's "Theory and Play of the Duende:"

"All through Andalusia, from the rock of Jaén to the snail's-shell of Cadiz, people constantly talk about the duende and recognise it wherever it appears with a fine instinct 'All that has dark sounds has ...duende.' And there's no deeper truth than that.

Those dark sounds are the mystery, the roots that cling to the mire that we all know, that we all ignore, but from which comes the very substance of art. 'Dark sounds' said the man of the Spanish people, agreeing with Goethe, who in speaking of Paganini hit on a definition of the duende: 'A mysterious force that everyone feels and no philosopher has explained.'

So, then, the duende is a force not a labour, a struggle not a thought. I heard an old maestro of the guitar say: 'The duende is not in the throat: the duende surges up, inside, from the soles of the feet.' Meaning, it's not a question of skill, but of a style that's truly alive: meaning, it's in the veins: meaning, it's of the most ancient culture of immediate creation." 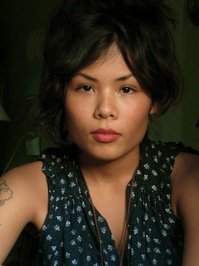 Kartina Richardson is a writer and filmmaker. She is of Asian & African American descent. She mentions this because everyone asks, so now you know. Her film commentary site is Mirror, and her blog is ThisMoi.She tweets at @ThisMoiThisMoi. She is particularly fond of Visconti and William Powell. She loves her Cocteau tattoo enormously, but when anyone asks who it is boy does she feel like an asshole.