Don't know why there's no sun up in the sky 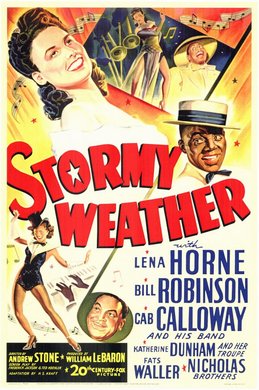 The first thing you must realize about "Stormy Weather," before anything else, is that it is not real. Of course it isn't real in the sense that it is a narrative film and as such it is fiction, but it is unreal in another way. It is a romanticization of African American life offering one-dimensional characters without nuance-- in "response" to the one dimensional un-nuanced characters in other films.

The movie opens as famous dancer Bill Williamson (Bill Robinson) receives a magazine in his honor "celebrating the magnificent contribution of the colored race to the entertainment of the world during the past twenty five years." This prompts him to reminisce about his career and courtship of the beautiful singer Selina Rogers (Lena Horne). The plot however, is of little importance. The film is primarily a vehicle for famous black talent in music and dance. These are glamorous blacks in romantic and dramatic leads. Blacks with sex appeal. Blacks with their own storyline.

But simple characters they remain, playing roles that White America was comfortable with. Every character in Stormy Weather is an entertainer first and foremost. As James Baldwin said:

"It is only in his music, which Americans are able to admire because a protective sentimentality limits their understanding of it, that the Negro in America has been able to tell his story. It is a story which otherwise has yet to be told and which no American is prepared to hear."

The whole picture is a tour of a fantasy black world inhabited by only the most talented musicians and dancers Harlem has to offer. A world where the only unhappiness is a result of romantic problems or chorus line disputes. Racism does not exist in Stormy's world because there are no races, just one magical people. Vaguely brown and wonderful with the greatest natural rhythm known to man. Every black person here has a purpose in the white world. They are not simply black, they are entertainers. This role as entertainer is very important as it exempts them from normal negrocity. Like Pino says to Mookie in "Do the Right Thing":

Mookie: "Pino all you ever talk about is 'nigger this', 'nigger that', yet all your favorite people are so called niggers." 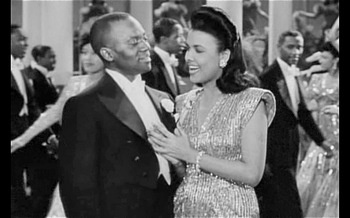 This attitude is really a method of self preservation. White America had to relegate black performers to a psychological netherworld that allowed them permission to appreciate black talents. Talents that were considered natural. This is an important distinction, for if an ability is completely inherent, no actual effort or skill is required. If the performers were actually human beings and their talent was the result of hard work, dedication, and discipline, there would be a problem; whites would have to call into question their whole white world, much of which was based on the devaluation of blacks and blackness. It's hard to justify segregation, for example, if you recognize African-Americans as having worth as human beings.

So you see, negro as entertainer is safe. 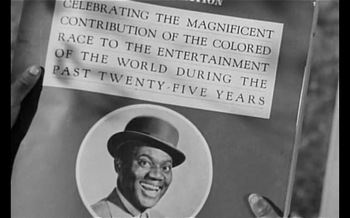 Every action the characters in "Stormy Weather" take is cushioned by their appropriate and non-threatening role. Bill Robinson is a black man with sexual desire, this is white America's worst nightmare, but he is a tap dancer and his desire is for another black woman, Lena Horne, also a performer, and light enough to be accepted as sexually appealing. It's also important to note that Robinson's desire for Selina is, to put it simply, boring, boring, and boring. It has been stripped of sex completely. It is a gentle, fatherly, and overly reverent pursuance devoid of any urgency or aggression. Robinson's courtship is done by a man with no penis or balls to speak of. This makes a world of sense since a dickless sackless black man is the only kind of black man America would accept in a romantic lead in 1943, even in a negro picture.

But despite all this Stormy Weather was still a movie with an all-black cast, and seeing African-Americans in something other than a service role, in a film before 1955, is powerful. You don't realize how powerful the absence of a thing is, until you are moved by something as insignificant as a group of black women talking to one another, or a black couple sitting in a nightclub. They aren't saying anything particularly interesting or profound (and this a the problem), but they are there. On screen. Black faces, black bodies. 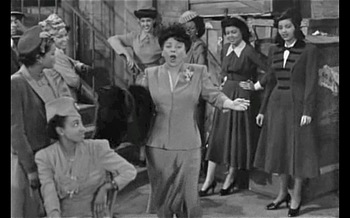 And though the film did cater to a white fantasy of negro life (where cake walking black girls have coony faces on the back of their headdresses), it remains a platform for black talent and a roll call of the greatest dancers and musicians of the 30s and 40s including Rill Robinson, Lena Horne, Fats Waller, Ada Brown, Cab Calloway, The Nicholas Brothers, and choreographer Katherine Dunham. All these entertainers have spectacular routines in the film, but my criticism of, and appreciation for, the movie embrace in one particular scene-- one much less spectacular that Dunham's ballet or Calloway's zoot suiting:

Exhausted from janitorial work on a river boat, Bill Robinson hits the hay.

Bill: "Ain't no money in the world can get me on my feet before we hit Memphis! And if I never see a bale of cotton no more in life, that'll be too soon." 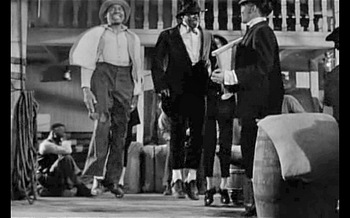 The sleepy negro in the corner agrees with a ridiculous "Awwm tyyred too!" and Bill falls fast asleep. A few moments later however, he is awakened by music. His exhaustion disappears. His eyes are wide! His feet start to move of their own accord! This is because as a negro, dancing and music are in his blood. Didn't you know black people love to dance?! They can pick all the cotton in the world, and they will still dance. Ooo boy do they love to dance and they love music. In fact, if you put a stethoscope up to a black person's chest, you won't hear a heart beat, you'll hear Bo Biddley or the shim sham (depending on the time of day). That's because negroes don't have hearts. They have small tap dancing men that live inside their chests.

"Must be those travelin' minstrel boys got on in New Orleans" says the sleepy corner negro, and Bill jumps up to find the fun. Though brief, the sequence that follows is one of my favorite musical scenes of all time. The aforementioned minstrel boys are magnificent. Evidence of the amazing and oft-imitated innovation of black artists. Men and women that with a surfeit of brilliance, should have been stars. In the scene the group performs a fast paced song complete with some genius skatting. Robinson sprinkles some sand on the floor to impress the musicians with his own dancing and finishes with the cherry on the very chocolate sundae: He jumps straight up and down, arms straight, glued to his side. One musician joins him in jumping, and then another, and then another, and then another.

They are all jumping straight up and down.

This doesn't seem like a big deal until you see it, and when you do, boy does it knock you off your feet. It breaks the boundaries of the composition, breaking the space in a way we're not used, especially in a movie from 1943. For some reason jumping in that simple way seems very modern. It is an unexpected rhythm and zeal. Totally thrilling. It encapsulating the characters' joy for performing. White America found it convenient to believe that this talent and joy for music and dance were inherent to blacks. In the black blood. But while performance is historically an important part of African-American culture, these art forms and this talent arose as an implicit response to a centuries long suppression of a people. An inheritance of anger that in the summer of 1943, the very year Stormy Weather was released, lead to race riots in Detroit and Harlem. And with that we'll let James Baldwin take us home:

"A tradition expresses, after all, nothing more than the long and painful experience of a people; it comes out of the battle waged to maintain their integrity or, to put it more simply, out of their struggle to survive."

Kartina Richardson's film commentary site is Mirror, and her blog is ThisMoi. She tweets at @ThisMoiThisMoi.