"Brief Encounter": A matter of the heart 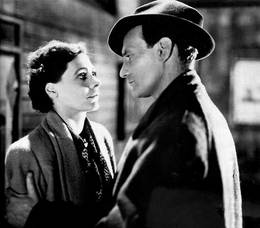 Marital infidelity is a favorite subject in films. It's one of many taboos which audiences can explore without having to live through its challenges nor worry about its consequences. The emotional and social tumult that comes with it always provides filmmakers and actors with complex and often fiery material to work with. But because it is a social ill, it tends to be viewed through an illicit lens.

The very way these kinds of love affairs are defined speak for themselves. Adultery. Infidelity. Cheating. Marriage is a sacrament, hence anything that goes against it is cast as sinful and wanton; and so go its movie portrayals. But there are many people who don't seek to be unfaithful. A need may not be met; a mistake may have been made; a devoted partner may be far far away. The heart has its reasons.

I can think of only a handful of movies which thoughtfully look into these matters of the heart. Pictures like Bud Yorkin's Twice in a Lifetime, Clint Eastwood's "The Bridges of Madison County," Adrian Lyne's "Unfaithful," and Sofia Coppola's "Lost In Translation" are some of the most recent. But one pioneer stands out as the archetype of the extramarital love affair: David Lean's "Brief Encounter."

Warning: Spoilers follow. When one thinks of David Lean, small scale and simplicity are not what come to mind, but his vision here is as simple as its title implies. A housewife and a doctor, both married to their partners, meet at a train station by chance. And somehow, they meet again. And again. And again. Their relationship unfolds as a recollection by Laura (Celia Johnson), the housewife, as she narrates how she and Dr. Alec Harvey (Trevor Howard of "The Third Man") came to be, and came to an end. Michael Mirasol's review:

Though it seems to be set in Britain circa World War II, the film's time and place can readily be interchanged with any time period, preferably in the "noir-ish" world where trench-coats and dimly lit street lights were the norm. The decision to film at a train station is a masterstroke, as the fleeting time to catch the last train heightens the immediacy of their longings, as well as the satisfaction of their meetings. It also doesn't hurt when steam and light projects a heavenly dream-like state in key emotional moments.

Though black and white was a standard filmmaking style during World War II, its importance here film cannot be overstated. The film's thematic simplicity, combined with its genius locale, and brave pioneering, requires it to be immortalized, which B&W readily provides. And to call the picture brave is an understatement, considering its conservative context. The film was controversial enough that it was initially banned in Ireland, since it portrayed adultery in a sympathetic light. Laura's final decision to stay with her family can seemed contrived or convenient for some, but it surely might have been a relief for those in its day. 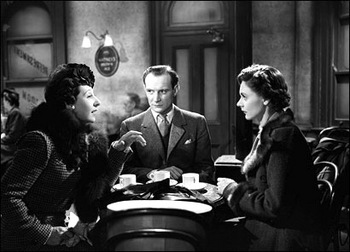 With Celia Johnson anchoring the film we listen to her plight, seeing how ordinary occurrences impossible to protect against could lead to her to love a handsome doctor. Coinciding train schedules. A busy restaurant with one seat left. A bad musician. A love for the movies. Both tied to routine. Both with the responsibilities of parenthood. A grit in her eye. Right places. Right times.

Though Alec and Laura are the film's focus, Lean also shows his gift of presenting unforgettable characters, most notably the naughty but affectionate stationmaster Albert (Stanley Holloway), and genteel shop lady Myrtle (Joyce Carey). They counterbalance Alec and Laura's pair in two notable ways; as comic relief to the serious considerations that surround the main pair; and as a shift in class consciousness. 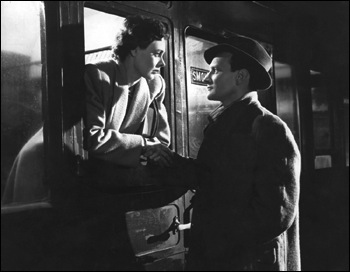 The author Frances Gray argues that the film shows this disparity in that the working class (Albert and Myrtle) is bereft of scrutiny when it comes to adultery as compared to the middle class (Alec and Laura), which in British society of the time, was considered to its moral backbone. It shows how Albert and Myrtle readily enjoy each other's company, and are more comfortable in their skins, whereas Alec and Laura have to find ways to explain themselves.

What I love about the film is that its "cheaters" aren't portrayed as malicious or salacious. Their feelings are real and important to them and they attempt to deal with its dilemmas. Marriage takes a lot of work, and works better when its principals are happy. Alec and Laura may have thought they were happy, but if they were, why are they seeking what is missing in each other? You have to admire a film daring to take that on, when common wisdom dictated being content with the status quo was healthy and enough. 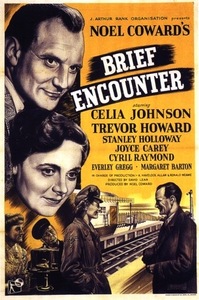 There are however some aspects to the movie that can feel awkward for today's viewers. The acting is expertly done, but pre-Brando, which can feel mannered. Its narration can seem thick and over-explanatory, though this could be due to budget constraints in wartime. Kissing can be distracting (but cute) because of its build-up and sudden completion, but that's how sexual tension was released on film in those days. Its dialogue is brisk, making it easy to miss at times (you could say the same for "Casablanca," but if you get into its rhythms, it works). Star-crossed conversations can sound quite unrealistic compared to today's writing. Yet, they are still serious, heartfelt, and never done for laughs, as if the words were written to reach out to the audience as a cry for help. Celia Johnson and Trevor Howard deliver these lines without doubt nor hesitation, Johnson particularly (the role earned her an Oscar nomination) earning our sympathy and respect with every closeup.)

It's refreshing to find a classic romance without meet-cutes and pathetic attempts to be clever, with two adults who know what is happening to them, feeling passion which they may have thought was lost for good. Both know their undertaking is unwise and know, within their realities, what needs to be done. But that doesn't mean what they feel isn't shared, precious, and true. With "Brief Encounter," David Lean (who earned his first Oscar nomination for this picture) shows his growing directorial gifts on route to his epic mastery of the movies and bravely deals with love that is frowned upon. It is courageous, sincere, and incredibly romantic.