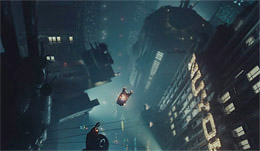 Does groundbreaking cinema go hand in hand with movie greatness? That's a question answered by Ridley Scott's "Blade Runner" (1982). Like "Metropolis" before it, here's a rare film with sequences that generate a sense of awe. Even though we now live in an age when the creation of extraordinary cities of the future has become routine thanks to digital effects, it's hard to imagine the Canyons of Coruscant (in the "Star Wars" prequels); the futuristic Washington in "Minority Report" or even the forthcoming versions of present day cities (in the new adaptation of "Total Recall") without the influence of "Runner" and none of these examples keep the audience's eyes fixed to the screen like Scott's Los Angeles of 2019. Here's a director whose doesn't just use special-effects to tell a story, he creates visual works of art in every frame of his films.

"Blade Runner" is a one of cinema's triumphs of art design, from its opening scene that shows oil platforms hurling giant balls of fire and gargantuan pyramidal structures emitting what seem like thousands of lights, to the extreme close-up of the eye that witnesses and projects their reflection on the screen. This is one of the rare movies that creates a functioning world of its own (like "Minority Report" later on) with working gizmos that actually serve a purpose to the plot. 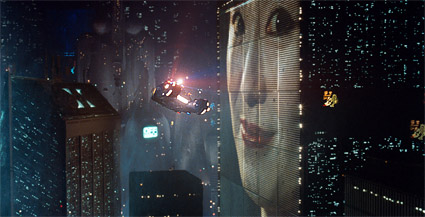 Later years have proved these contraptions were not simple figments of the filmmakers' imaginations (think of the oral picture-amplifier and the phones that run with credits) and by appearing old and worn-out, they only feel more believable. Even the outlandish subplot about the genetically designed creatures by the William Sanderson character (a Gepetto of sorts) is intrinsically related to the story and can only make sense in a universe such as this.

"Blade Runner" is a noir set in the Los Angeles of the future. This is a world where "replicants" have been developed for space exploration with "greater strength, agility and least equal intelligence" than regular human beings." What could possibly go wrong? Just as it has occurred with most artificial creatures in the history of motion movies (HAL 9000, the child from "A.I" and even Paulie's butler in "Rocky IV") these androids become self-aware and develop individual personalities. They also end up killing dozens of people and are consequently banned from earth.

Those who defy this law are persecuted by a special force of cops known as Blade Runners, with Rick Deckard (Harrison Ford) coming out for the requisite "one last job" of finding and "retiring" a particularly dangerous group of replicants who are in search of their creator, philosophizing about the meaning of their lives and doing whatever it takes to extend them.

I first saw "Blade Runner" when it came out in 1982 and I don't think I've watched it more than a handful of times over these years. It's odd that such a great looking film is not particularly re-watchable but the character and script development are nowhere near at the same level as the art design, making it a surprisingly dull experience overall. In his previous feature "Alien" (1979) Ridley Scott took a group of unappealing oil-exploration workers with very little loyalty to one another, and still managed to make us care deeply about their fates.

Think for example of the unexpected halfway moment when the Tom Skerritt character was done in by the title creature, a scene that's every bit as shocking and painful as Janet Leigh's demise in "Psycho. In contrast, "Runner" doesn't have a single character that can remotely be described as engaging. One would have assumed that the casting of a heroic personality like Harrison Ford would have given us a solid figure to follow but his motives aren't very clear and, as a result, we never care much about him or his mission. This is why it's hard to blame studio executives for imposing the dubbing of typical detective narration by Ford (not that it helped much).

Even worse is the Sean Young femme fatale who plays her part in a single, unexpressive note and is purposely made to look like a mannequin, taking away any impact from the revelation that she's a replicant as well. There could be several implications to her relationship with Deckard but none are really explored and we never become emotionally involved with either one of them. 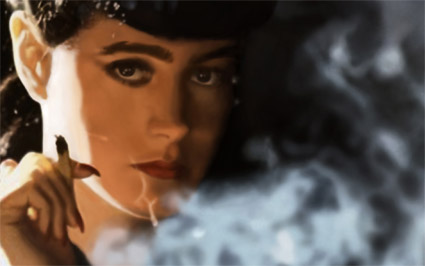 "Blade Runner" is based on a story by renowned sci-fi writer Philip K. Dick but it doesn't have the complex dilemmas of his other film adaptations such as "Minority Report" or "Total Recall". This is basically a straightforward detective story under unusual settings and circumstances. We come to learn that the replicants were programmed with a four year life-span that would limit any possible threat from them to that period (why not simply make them re-bootable?). Unlike Ash (Ian Holm) in Scott's previous own "Alien", these aren't clunky beings full of a milky substance but instead are identical to humans to the point of sweating, bleeding and managing to convince anybody they are the real deal (sometimes even themselves). The purpose of making them with such accuracy is never fully explained but the only implication from having them pass as humans is that they'll eventually end up bringing nothing but trouble (it surely can't make them any cheaper to build).

"Blade Runner" has been released several times under various presentations. The final version is Ridley's favorite (spoiler alert!) and it gives us strong indications that Deckard himself might unknowingly be a replicant. This is very intriguing but doesn't precisely help us identify any more than we already did. It also raises several questions. Considering that the replicants were designed for dangerous missions, it makes sense that they were built stronger than regular human beings but then, wouldn't it makes sense to equal the field by giving Blade Runner robots similar strength to the nemesis they will be fighting? Why not give all replicants Deckard's kinder disposition? Why keep some of them from learning their true nature? Why not do the same with them all and avoid their nonconformity?

The script is much too ambiguous on these matters and resorts to portraying every remaining character in a bizarre fashion that's fascinating but hard to relate. Case in point is the Darryl Hannah android, who early on is shown as a frail, abandoned being and just as we start to care about her, she disguises herself as yet another life-size dummy, developing some senseless acrobatic moves that make her look menacing but only serve in giving her opponents enough time to get out of the way.

In this day and age when quick cuts and shaky cameras are constantly used to frantically move the story forward, it's refreshing to find a film like "Blade Runner" that takes its time and let us fully appreciate images that are well worth watching, and yet, this comes with a price. The movie shares some common traits with "Alien": the pace in both is rather slow and there are long lapses between the action. This approach did wonders in the older feature, as it forced the audience to contemplate the possibility of a sudden scare at any given time. In "Runner" Scott seems so concerned with designing the backdrop images that he relegates the story to a second level and we end up focusing on the scenery while diverting our attention from the proceedings.

"Blade Runner" is a great example of several things. It shows us how even a fantastic visual experience can't hold our attention for two hours if we are not made to care about the characters or the story. It is proof that the latter two aspects are of even more importance for a feature to work. "Runner" may very well be the best of the worst pictures ever made, or perhaps the worst of the best, but this places it in a spot of mediocrity that no work of such phenomenal qualities should ever approach. I feel grateful for its existence and I'm aware there are plenty of readers who believe that its visual virtues automatically make it deserving of cult-classic status, but I also can't help but ultimately see this (one of the most influential films of the 80s) as a one-of-a-kind wasted opportunity for greatness.