Apocalypto: Epic in a real jungle 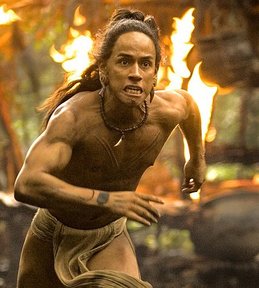 I truly enjoy Mel Gibson's work as a director. His films, whether he stars in them or not, always reflect a passion and heart like few others. His best work these days, more and more, seems to be coming from behind the camera. It seems to me he really makes the movies for himself first and second for everybody else, no test audience previews to influence the final product.

"Apocalypto" is a film about the demise of the Mayan civilization. It tells the story of Jaguar Paw, whose small village is attacked by a group of hunters from the nearby metropolis, their job literally being to pillage small defenseless groups while looking for "volunteers" for their "most dangerous game": the sacrificing rituals that the city's leaders use to keep the masses entertained.

But unlike just about all of his peers, Jaguar Paw has been able to have his family spared by leaving them "holed up" in a most precarious situation. Will he be in time to save them before a pack of very angry suitors (or the jungle itself) stops him? Can a civilization like this, technologically advanced (relatively speaking of course) but rotten in its core, go on forever?

"Apocalypto" can be questioned for being graphically and brutally violent It can also be criticized for having the audacity to portrait what seems like a seven foot Mayan in a race of extremely short people; it can even be called out of not being historically accurate, after all, the Mayans were long gone when the Spanish arrived in present day Mexico during the 16th. century. I believe these feel like a foreigner's version of such events but nonetheless, this is also a beautiful looking, emotional and incredibly exciting film which at times makes "The Last of the Mohicans" seem passive in comparison. Besides, as Roger has said many times before, movies are probably not the best place to learn about historical facts. 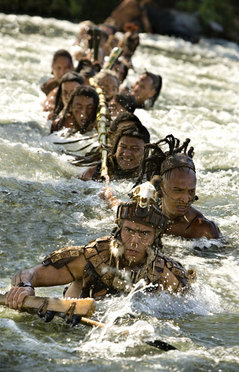 "Apocalypto" was shot in an epic scale on a real jungle, with real size sets and mostly real animals, but it's the little details that stick with us: the ruthless warriors who fear nothing except for the sick, ominous, little girl; the meeting eyes from an old woman and the son-in-law whose life she once made more than a little difficult, but that now can only show pity for his upcoming, tragic faith; the happy and rich overweight kid enjoying his front row position to view barbaric events acting as if his rich dad had just gotten him free tickets on the fifty yard line. 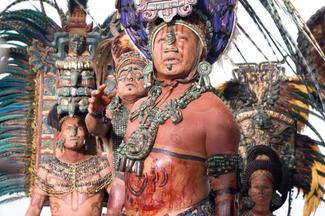 Perhaps the main reason for which a lot of people may have skipped "Apocalypto" is the fact that it is spoken in a dead language and was cast with total unknowns. Was Gibson right to make these choices? Absolutely. Nor only would the movie have sounded ridiculous in any modern language but these possibilities allow us to feel when the credits roll, that we actually attended the events depicted here, what some call "the fly on the wall" theory. 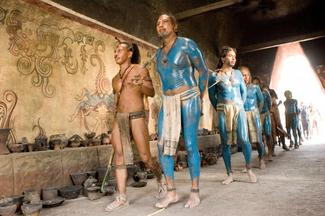 For me, "Apocalypto" represents the opportunity to finally witness on the screen one of my country's ancient cultures after so many years of being thought about them in history books as a child. All those lessons about the inner workings of these societies are so much easily absorbed when they are depicted on a screen as well as they are here.

If you're tired of watching the same action movie over and over again and you've never seen "Apocalypto", I heartily recommend that you do. Please keep in mind this is a film that could be described as an "anti-chick-flick", in other words, it may be a bit more appealing for men than for women, (at least based on the reaction of the audience I shared my theatrical viewing with). Also beware if violent scenes make you squeamish (you may want to skip the candy counter this time around). Otherwise you're in for a great cinematic experience.