An FFC Review of Shion Sono's "Why Don’t You Play in Hell?"

I could not enjoy the first part of the Japanese black comedy "Why Don’t You Play in Hell?" because nearly all of its characters are too hysterical or delusional or idiotic in their own way. They frequently look and behave like a bunch of caricatures coming right out of Japanese anime/manga, and it was sometimes difficult for me to watch their lunatic behaviors, further amplified by the blunt, exaggerated style of the movie.

However, I watched the film with some sort of bizarre fascination, observing how far it was willing to push its sheer craziness, and it surely did not disappoint me. It is apparent from the opening scene that this nutty movie does not give a damn about looking realistic or believable at all, and it keeps going on and on with more craziness, and then we find ourselves in the middle of the deranged bloody mix of passion and delusion, in which every character is swept to the extreme point which must be seen to be believed. 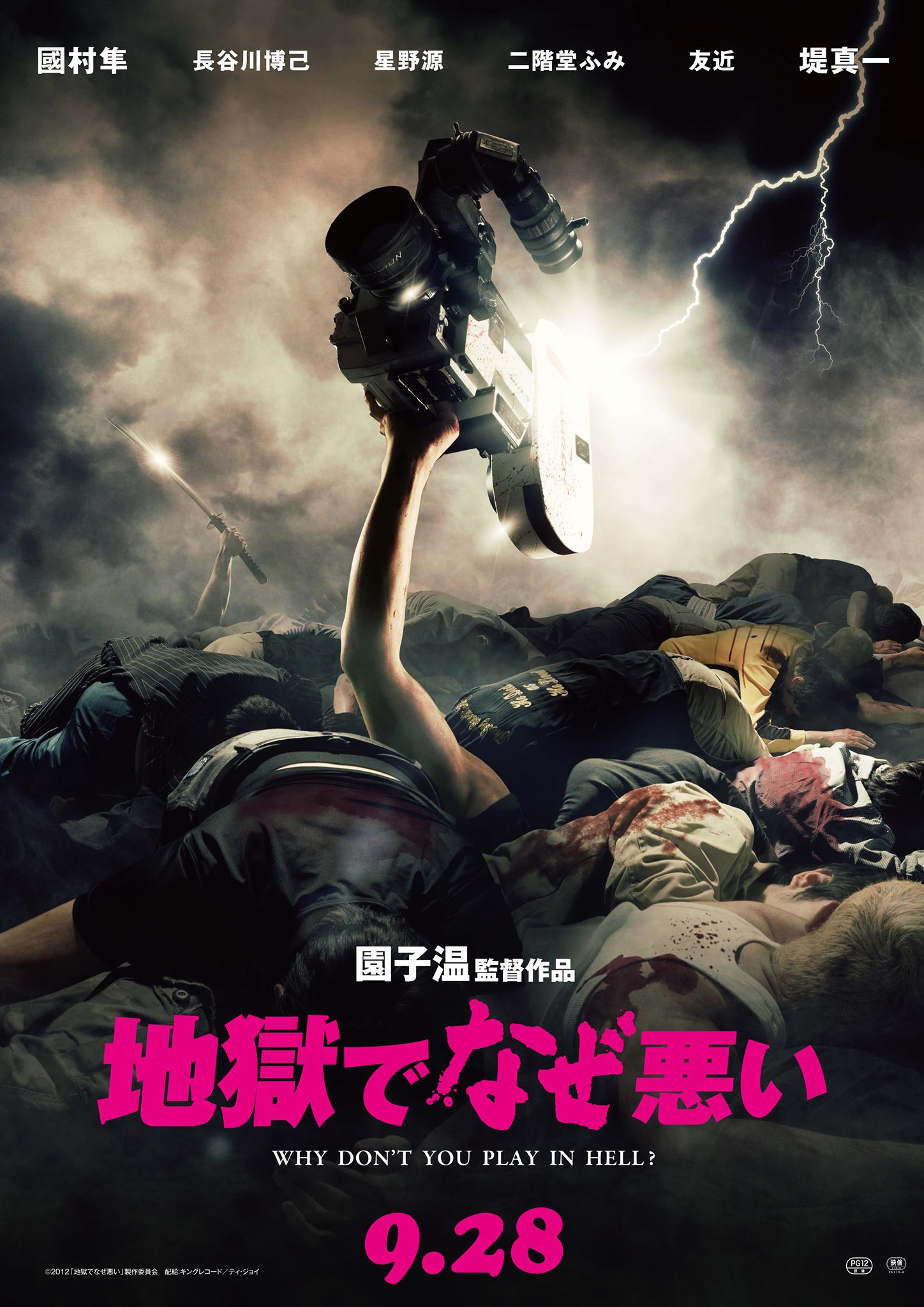 After a bright, cheerful toothpaste commercial featuring a cute little girl and her catchy jingle, the movie introduces to us four members of a pathetic high school movie club named "F*ck Bombers." Always dreaming of a great movie they will make someday, they shoot whatever is in front of their 8mm movie cameras, and they are sincerely encouraged by a kind projectionist working at a local movie theater. It is pretty clear that they are not that talented even if their passion is as admirable as, say, Ed Wood. When they are about to shoot a scene, they are not prepared, and, when a fight between young hoodlums happens to start nearby, they instantly throw away their initial plan because, well, action is always more interesting to shoot.

Meanwhile, there is a big clash between two yakuza organizations in the neighborhood, and that results in a bloody incident with the wife of Muto (Jun Kunimura), the leader of one of these two gang organizations. Five rival gang members break into his house to kill him, but they only find his wife in the house, and everyone except one guy is brutally murdered by this feisty woman who happens to be working in the kitchen at that time. It turns out that a young girl in that toothpaste commercial is Muto’s daughter, so we get a viciously humorous moment when this cute little girl cheerfully arrives at her home and then gracefully glides on one hell of bloodbath left by her mom.

Not long after that, F*ck Bombers come across an injured gang member who managed to get out of Muto’s house alive. They instantly shoot a scene with this guy while never realizing how serious the situation is, and Ikegami (Shin’ichi Tsutsumi) gladly allows that just because he wants to look good in front of the camera. He survives in the end, and then he becomes the new boss after his boss is killed by Muto as a part of his retaliation. Muto and Ikegami agree to that they are even now, and everything looks settled thanks to their reasonable agreement, which is incidentally one of a few sane behaviors in the film.

The movie jumps to 10 years later, and Muto is eagerly waiting for the upcoming release of his dear wife. He has an ambitious plan for welcoming her return. He is going to make a movie for her, and the star of the movie is none other than his daughter Mitsuko (Fumi Nikaidô), whose career in the entertainment business has been tarnished by her mother’s carnage. He has money, and his gangs are willing to help the production, but his spoiled daughter does not care much about her father’s plan—and that makes a big headache for Muto, who really wants to complete the film before his wife is released from the prison. 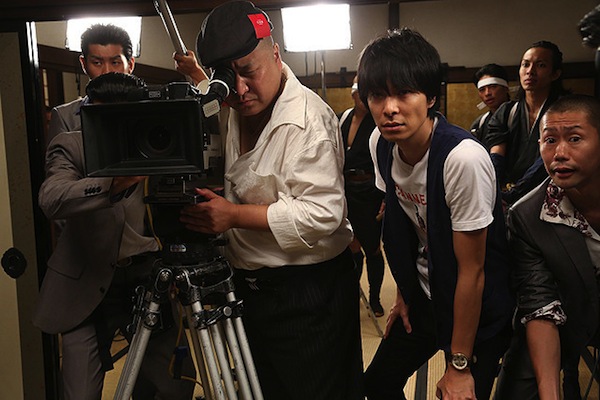 Meanwhile, we meet F*ck Bombers again, and they are in a far more pathetic state than before. The local theater, which used to be their hangout, is about to be closed, and they have so far only made a cheap trailer for an action movie they have not even shot. Hirata (Hiroki Hasegawa), still hopeful and ambitious about their future as the leader of the group, maintains that they should not give up their dream, and his camera guys, Miki (Yuki Ishii) and Tanigawa (Mika Haruki), are loyal to him as usual, but Sasaki (Tak Sakaguchi), who has dreamed of becoming a Japanese answer to Bruce Lee (he is even wearing that famous yellow tracksuit from "Game of Death" [1978]), becomes sick of this situation which has been going nowhere for him or others. He finally decides that enough is enough, and that leads to a hilarious confrontation between Sasaki’s angry frustration and Hirata’s incorrigible delusion.

It will be pointless to tell you that F*ck Bombers will get involved with not only Muto’s gangs but also Ikegamis’ gangs, and it will be also futile to describe how that happens, for the director/writer Shion Sono keeps building the momentum inside his story with more outrageous nonsense, which may be too much for some of you to suspend disbelief. Uncompromisingly mean and violent, hysterically kitsch and melodramatic, his movie crazily dances between many jarring elements, including absurd humor and extreme violence. Setting its intensity level high all the time, it never flinches from any possible bad taste during its macabre romp, and I think I must warn you that there is a cringe-inducing scene involving the sharp fragments of a broken beer bottle.

I heard that Sono wrote the screenplay 17 years ago, and, as alternatively flabbergasted and amused by its many preposterous narrative turns, I could sense the heedless passion of a young filmmaker who was willing to try whatever he could with his story. The movie frequently feels loose and unfocused during its first half, but then everything starts to gather around the flimmaking process in the story during its second half, and it eventually culminates into a demented climax sequence filled with madness, mayhem, and blood. It is surely a violent climax, but this is rather hilarious to watch, mainly because of its weirdly exuberant mood which further elevates its incredible absurdity to another level of lunacy.

It goes without saying that not all of the characters in the movie will survive in the end, but everyone seems to be in on the good mood while being ready for their *real* violent action in front of the cameras. For Muto, this is his sincere gesture of love and gratitude to a woman who defended his organization despite his frequent infidelity. For Ikegami, who has been nurturing a rather unhealthy obsession on Mitsuko since their accidental encounter in the past, this is a golden opportunity to appear with her in front of camera, and he even orders his men to cooperate with their enemies as much as possible.

In the case of Hirata, this deluded guy cannot possibly be happier to get such a fantastic chance to make his first movie. As he is enthusiastically working with his crew to capture massive chaos going beyond control in front of his cameras, you see a lad who fully commits himself into what he loves to do, and his irrepressible joy of filmmaking makes an ironic contrast to all the bloody violence showered upon him and others.

Shion Sono previously made "Cold Fish" (2010), a dark, disturbing film about an ordinary man falling down into his own darkness after getting involved with an ebullient guy who turns out to be a cruel and remorseless monster. I did not like that movie enough, but its cold, grotesque mix of black humor and ruthless violence was quite chilling to watch at times, and that uncomfortable experience was more than enough for me to understand why Sono’s works have been contrasted with the gentle works by his fellow countryman Hirokazu Koreeda.

While more cheerful and enjoyable than "Cold Fish" in comparison, "Why Don’t You Play in Hell?" requires a certain sense of humor to enjoy its violent and insane comedy. I did not enjoy everything in this film, but I appreciated its goofy energy and no-holds-barred style even when cringing at its extreme violence, and it also generates some surprising moments of genuine emotion. These characters are indeed stupid and crazy, but I guess it does not hurt to have some laughs with the bloody filmmaking that they're willing to die for. After all, aren’t there many young hopeful filmmakers ready to kill for their glorious debut?