"America is not a country, it's a business." 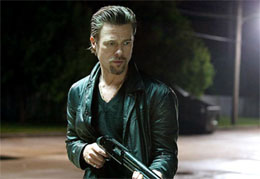 So says professional killer Jackie Cogan at one point in "Killing Them Softly", the third film by New Zealander Andrew Dominik - and considering the filmmaker's efforts to establish a connection between the events in the movie and the economic crisis started in the late 2000s thanks to the greed and lack of scruples of Wall Street, it is easy to see Cogan as an ordinary employee of any company complaining about the lack of vision of his bosses and, on the other hand, the big bankers as Armani-dressing versions of the violent mobsters who inhabit the crime section of the newspapers. More than that: fearful due to the financial disaster caused by their colleagues in Wall Street, the bad guys presented by Dominik are miles away from those gangsters who used to throw hundred dollar bills on the ground or distribute tips in exchange of a smile; instead, here they need to haggle prices with professional killers and negotiate with theirs superiors before approving a sum of a thousand dollars for framing someone.

Adapted by the director himself (who was responsible for the great Chopper and the masterful "The Assassination of Jesse James by the Coward Robert Ford") from the book by George V. Higgins, "Killing Them Softly" takes place in 2008 during the U.S. elections that culminated in Obama's victory - and throughout the narrative, we often hear excerpts of speeches by the candidates about the country's economic situation as the characters discuss their own problems. And they do have problems: after the small-time crooks Frankie (McNairy) and Russell (Mendelsohn) rob a card game packed with individuals you wouldn't want to annoy, the mafia bosses who own the place send hitman Cogan (Pitt) to find those responsible while using the lawyer played by Richard Jenkins as an intermediate contact. 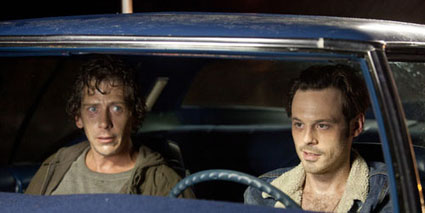 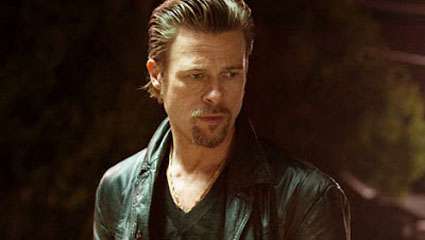 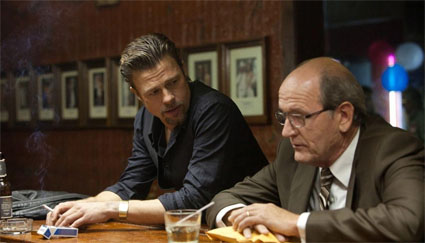 Setting the tangentially allegorical tone of the narrative in its initial seconds when we see Frankie walking in a poor New Orleans neighborhood while an uncomfortable and dissonant score is interspersed with excerpts from an Obama's speech, the director seems less interested in plot than in the characters, investing in long scenes that follow conversations that have little to do directly with the story, serving instead to develop that universe and its pathetic and violent inhabitants. So when the aspiring mobster Johnny "Squirrel" Amato (Curatola) says "We are not the only smart guys in this world", it's impossible not to realize how little he understands about his own stupidity and the fact he's starting a series of events that will hardly let him alive. 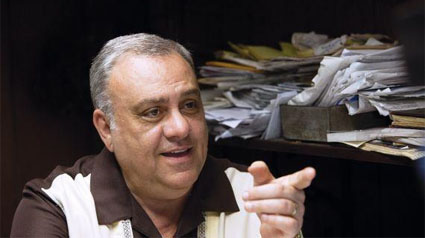 In this sense, the disgusting duo of Frankie and Russell are perfect representatives of the world designed by Higgins: while the former is presented as a classic loser who can't even be a minimally effective criminal, the latter is portrayed by the great Ben Mendelsohn (who deserves awards for his performance) as a constantly spaced junkie whose grandiose schemes would cause embarrassment even to the silliest of thugs - and Dominik perfectly presents the frustration of trying to maintain a conversation with someone steeped in chemistry by using a maddening sound design and distorted shots that compel the viewer to want to slap Russell out of his stupor. Meanwhile, the killer embodied by James Gandolfini (who turns his heavy breathing into art) emerges as a man who, after decades dedicated to crime, finally seems to realize that the only thing he built with his actions was a future of loneliness. 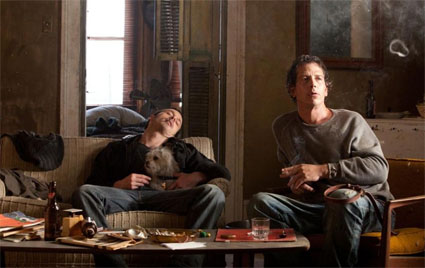 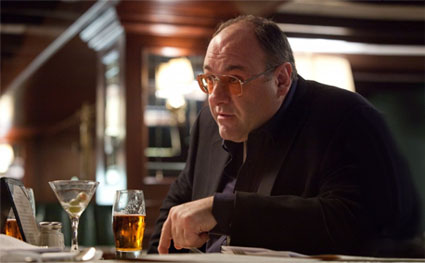 Thus, it's not difficult for the viewer to establish a certain identification with Brad Pitt's Cogan since, with his old school methods (he seems straight out of the 70s and is first presented to the lyrics of Johnny Cash's "The Man Comes Around"), he seems to be the only reasonably sane and intelligent creature in that universe - which doesn't mean, of course, that he has any morals, since, for example, he decides to kill an innocent man just because he believes that will be good for his employers' business. Efficient in his brutality, Cogan is perfectly capable of showing genuine concern for the financial and psychological well-being of a colleague only to, in the next instant, frame him for considering his attitudes inconvenient and unstable. And the fact is over "Killing Them Softly"'s 97 minutes, the character ​​reaches iconic dimensions thanks to his coldness and bluntness - something that Dominik and cinematographer Greig Fraser's beautifully illustrate in a shot that shows Pitt gigantic face superimposed on a clouded and devastated landscape. 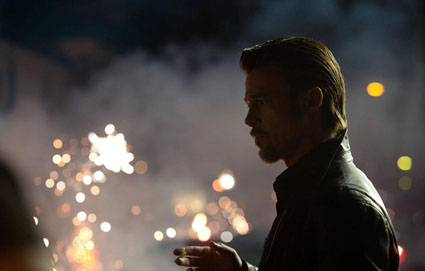 Full of brilliant sequences such as the robbery and the brutal beating of a man under heavy rain, Andrew Dominik also turns the execution of a character in a poetic spectacle by employing slow motion to show the bullets touching raindrops and the windshield of a car breaking with the impact of the victim's head - a stylization that is never a glorification of violence, but a mere reflection of Cogan's philosophy expressed by the movie's title and that involves preventing "unnecessary" suffering for his victims and - specially - embarrassment for himself over their cries and requests for clemency. (And in this sense it also reflects the scene that gave T"he Assassination of Jesse James" its title.)

On the other hand, if the filmmaker goes overboard with the numerous references to the economic crisis over the narrative (something that makes him look unsure about our ability to get the point), the truth is that his thematic concern ends up being well represented by the corporate mentality expressed by the lawyer played by Jenkins and especially by the fantastic shot in which the killer played by Gandolfini walks through the lobby of an airport pulling his briefcase as a regular executive. With this, Dominik includes "Killing Them Softly" in the large group of American movies that, after 9/11, started portraying large corporations as villains due to the lack of character and humanity of their leaders and lobbyists.

Compared to Wall Street, the Corleones would be amateurs.