Adrift among the Vanishing Olive Trees 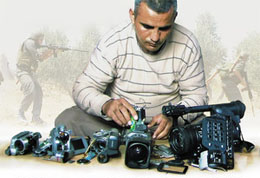 Emad Burnat's "5 Broken Cameras" (2012) is the most powerful movie since "The Interrupters" (2011). In this autobiographical documentary, the director purchases a video camera to chronicle his newborn son's growth. Trying to catch those firsts (first smile, first step, first tooth), he cannot separate them from events in his rural Palestinian town, itself defined by life under occupation. In the process, he watches his camera get broken from a grenade. He replaces it with another, which gets broken. And he replaces it with another. And another. And another, so that each camera becomes an episode in his life. The film gets progressively shocking and perilous. In contrast to hopefulness underlying "The Interrupters," however, this film gets progressively more hopeless and desperate.

Burnat speaks with a soft voice, an emotionless frankness about what he sees, though he looks like a man who would rather not say anything. He does not have a job, though he is able to live off his family's farm. His eyes betray a resent that younger brothers develop from a lifetime of abuse by their elder siblings. Here, however, the scorn comes from a very different, clear source. This film is the best, saddest depiction of the Palestinian narrative of the Nakba (the Catastrophe) in this nearly 70 year conflict. Israel itself here is a giant squid whose tentacles keep stretching in, taking and taking, through bulldozers and bullets. 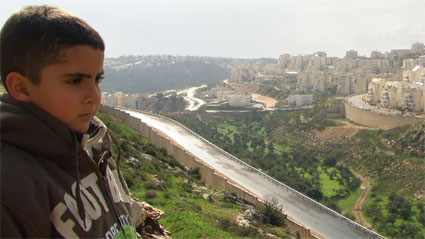 Each of his sons seems to represent different phases in the occupation. The first arrives at the time of the Oslo Accords. The next: during the Second Intifada. His newborn, Gibreel, joins the family upon the Wall's construction. The film begins with Israeli surveyors cutting his family's farm in half, in preparation for construction of that Wall, separating not only Israelis from Palestinians, but also separating many Palestinians from their own plots of land. Large bulldozers uproot ancient olive trees. Soon he spies Settlement construction. Then, during a raid by Israeli Defense Forces, he realizes that he is surrounded by soldiers disguised as Palestinians, hoping to provoke real Palestinians.

He is merciless in his depiction of the Israeli soldiers, depicting them as silent, nameless men in uniform, helmets and large guns. Their warnings are scripted, and their shots are loud. And, they keep arresting Burnat's friends and siblings. In contrast, however, many of the Israeli civilians (as well as foreigners) are allies sympathetic with the Palestinian plight, and/or oppose the Israeli state's actions against them. The exception here, would be the Settlers, who not only get Israeli support as they break state laws through their territorial expansions, but they have no qualms about beating Palestinians bloody or burning fields olive trees in retaliation for Palestinian protests.

This film is an exercise in silence. Except when the IDF arrives, the people tend to be as quiet as the flowing hills. Recalling "Paradise Now" (2005), that silence is the sound of suffocation. Their tools of protest are the tools of powerlessness. When the soldiers swarm in, however, they respond with assorted protests. Some protests are almost comical theatrics mocking their ludicrous plights, while others are the usual attempts at civil disobedience preventing construction. In other cases, however, Burnat's friends are unable to do anything but shout or give speeches calling on the soldiers to retreat. 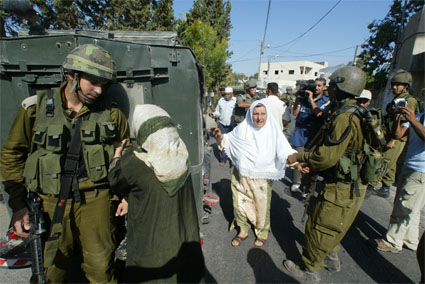 The family finds comfort together in working the land, collecting olives for consumption or sale. The land is their therapist, almost their Gaia. So, when they get taken from it, their town becomes an orphanage of sorts. And, that also explains why Burnat's wife Sophia, raised in Brazil would come back here. Nevertheless, her eyes are tired. She rubs her neck in exhaustion not from the housework, but from the daily stress. Her tolerance of Burnat's filming decreases, as he faces stronger threats from the government. Still, when his townspeople need therapy, to distance themselves from the toxic environment, they watch his video footage.

Burnat does not shelter his sons from the trauma either. They develop vocabulary tied in with the occupation, where Gibreel learns such words as "wall" and "army" and "shell." As Gibreel grows more aware of the family's circumstance, he witnesses his uncles and neighbors get attacked and arrested by soldiers. He comes home and tells his mother what he saw, and informs her in his wide-eyed, little-boy curiosity that he was "not afraid."

Burnat tells his story through some other lively characters, especially two friends: El-Phil and Adeeb. El-Phil is popular among the young people because he is the only one among these men who seems to hold on to any hope. Adeeb, in contrast, is the showboat whose well-being concerns his friends. He chooses to respond to the drama as though he is a player in an absurdist theater. That is, until he gets shot, and calms down just a bit. Everyone in this film seems to get arrested, shot, or wounded at some point, even the sympathetic Israeli civilians. 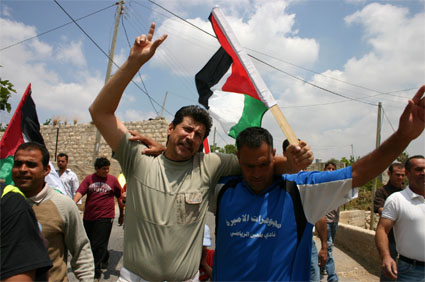 The film grows in tension with the force of the strongest of feature film narratives. Protests and raids get more aggressive. Palestinian blood splatters more quickly. Homes get stormed. And, the olive tree farms look like the charred wasteland from a war zone, except the occupied fight not with guns, but with shouts and camera footage. The Palestinian Authority, however, is nowhere to be found. They are mostly unwilling and unable to help, except for their own photo opportunities.

Critics of this film will protest that it gives a free pass to the Palestinians as contributors to their own plight. Again, while "The Gatekeepers" (2012) works through the Israeli narrative, here, we watch the Palestinian narrative. Here resistance is almost entirely non-violent, against Israeli atrocities. There are no rockets. No suicide bombers. And, that is part of the problem of the discourse. When Palestinians speak of Israeli independence as a catastrophe, it has nothing to do with anti-Semitism or religious doctrine. The problem is the occupation, which has the effect of an earthquake. This film, then, is an exercise in the basic truth that even when drowning in a crushing crisis, life goes on. When you push back against an onslaught, watching your siblings die, you yourself are ready to die, because you have nothing to lose. And, your last form of resistance then is to live because you have no choice, except that life still goes on.