A suicide fights for his life

On his last day on the job, John Ottway sits in a bar full of workers. Most are involved in a violent brawl, but he sits alone isolated and unbothered by his surroundings. His sad eyes seem lost in thoughts of hopelessness. As he walks out in the cold mist to a remote spot, we learn of a suicide letter he's written to the wife who left him. Ottway holds the barrel of a rifle in his mouth and closes his eyes, ready to pull the trigger. The unlikeliest of signs makes him remove the rifle, the howl of a wolf in the dark.

Joe Carnahan's "The Grey" tells the ironic story of a suicidal man who ends up fighting for his life after a plane crashes into the wolf-infested wilderness of Alaska. I don't know about you, but the first half of that sentence interests me more than the second half.

No family, no friends, nothing waiting for him, just the memory of a brighter past. Why would a man who got stripped down till he had nothing left, a man seriously contemplating suicide, end up fighting for his own survival? The question left me thinking of this philosophically heavy film all year. People walked into the movie expecting a plane crash and Liam Neeson fist fighting wolves and got a much deeper art film. 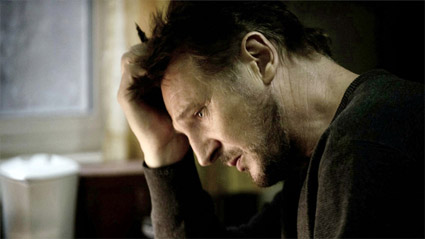 I've read countless reviews of people criticizing the film's harsh depiction of wolves and how the behavior of wolves is portrayed unrealistically, but if that's what they think the film is about, then sadly they only see the surface.

"Jaws" isn't about realistic shark behavior. Its sole purpose isn't to portray great white sharks as man-eaters; it's about characters overcoming their inner demons. Chief Brody facing his fear of going to the water, Quint dealing with his past experience at the Indianapolis; "Jaws" is about characters facing their fears instead of running away from them. What distinguishes "The Grey" from all the "Jaws" copycats is that it isn't about man vs. nature, but man vs. himself.

If you still haven't seen this modern masterpiece, I suggest you stop reading at this point to avoid spoilers. Make no mistake; "The Grey" is not a slow film. It features very well constructed scenes of intense action and sheer horror. Take the plane crash for example.

It is without a doubt the most horrifying plane crash ever depicted on film. The camera pans back the dark corridor of the plane's dim interior. We see the passenger TV flickering like there's a loss of electricity. The passengers are silent and unnervingly asleep because of the turbulence. We see cold air exhaled from the passengers as we move all the way to our protagonist, who too is in deep sleep. A sudden drop and the disturbing sound of power failure interrupt his calm dream.

The director wisely avoids cutting to an exterior shot of the plane plunging into its demise. We're kept in the plane, with the characters, and it's as close as a director could get to have his audience strapped in seatbelts.

This scene is a testament to the power and importance of sound. Another impressive scene that makes good use of sound takes part much later in the film. After the plane crashes in the middle of nowhere they set out to the distant woods to avoid any more wolf attacks. 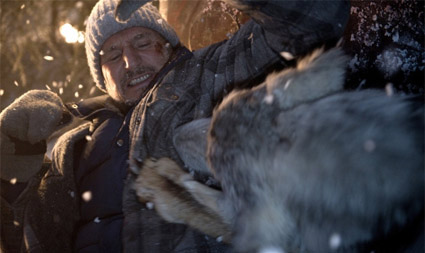 As soon as they arrive they make a quick fire to fend off the wolves chasing them. We don't actually see the wolves, but Carnahan literally tell a story through sound. Using only growls and cries, we learn that one of the wolves tries to take on the alpha male but ultimately fails. 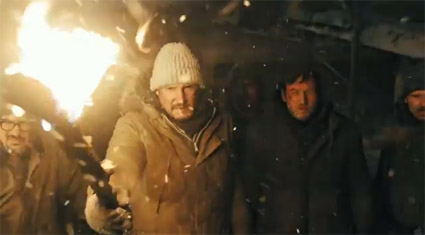 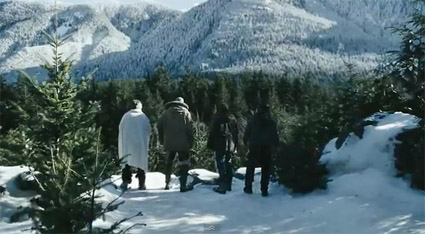 After repeated viewings, I noticed that there's a lot more to this significant scene than meets the eye, or ear for that matter. The mirroring scene that follows shows tough guy Diaz (Frank Grillo) as he challenges the dominance of the alpha male of the human pack, Ottway.

Throughout the film the tension between Ottway and Diaz builds up to this critical moment. It all starts right after the plane crashes. When Ottway notices Diaz is stealing a calfskin wallet off one of the dead bodies, he confronts him. "I'm going to start beating the shit out of you in the next five seconds. And you're going to swallow a lot of blood for a fucking billfold." 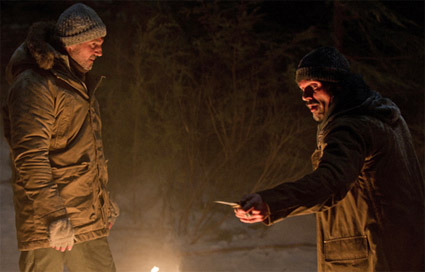 With Liam Neeson's badass delivery, Diaz wisely throws the wallet away. The next morning the verbal confrontations continue when Diaz disagrees with Ottway's decision to leave the crash site, "Nobody nominated you shit by the way!" Frank Grillo delivers a magnificent supporting performance and seeing his character arc from beginning to end is bound to pull a few heartstrings.

The verbal duels eventually lead to a physical one which mirrors the unseen incidents happening within the wolf pack. Ottway ultimately tells him that it's okay to be scared. Diaz takes it the wrong way and thinks he's questioning his masculinity. One thing leads to another and the alpha wolf interrupts their brawl. The wolf takes a step forward, Diaz takes one back.

The film has a very interesting take on masculinity. Hollywood has always displayed men to be brave and fearless, and for some reason this has sunk itself into the human psyche. We now attribute real men with false characteristics. And here comes Ottway, who's emotionally beaten up, and he's standing up against this false image of masculinity.

Diaz: Cause I wanna live, motherfucker. Do you understand that? I don't want some Timberwolf shittin' me out on this mountain.

Ottway: You don't need all that nonsense, all that chest puff bullshit. What's wrong with being scared?

Diaz: I can tell.

Ottway: And not an ounce of shame in saying it. I'm scared shitless.

Diaz: That's because you're a punk. I don't walk through this world with fear in my heart.

Ottway: You pick that up in the pen? Somebody scribble that in the day room wall?

Ottway: Talking tough means jackshit now. You're not scared? You're a fool. Worse, you're a fucking liar.

It's a beautiful confrontation and the fact that it all mirrors the previous scene adds to the metaphorical depth of "The Grey". We're all just animals in this world; human ego has us believing otherwise. There are so many ways to look at the film, because it's rich with symbols and philosophical undertones.

One of the more interesting takes on the film is that John Ottoway is a lone survivor and all other characters are just facets of his personality. Think about it, the macho tough guy, the family man, the non-believer, and the believer. This theory is supported by the fact that after the crash we see him all alone in the midst of everlasting snow. At the film's finale, he's alone once again.

I referred to Ottway as both a believer and a nonbeliever. The truth is, he's both. I don't know why people like to label one another based on religion. Faith isn't as simple as black and white. There's grey in between and many people place themselves there. When asked whether he's an atheist he replies, "Nope...I'm a realist. I really wish I could believe in that stuff. This is real, the cold." He lets out a breath. "That's real, the air in my lungs, those bastards right there in the dark stalking us. This is the world that I'm worried about not the next."

"The Grey" explores man's most frightening questions, the reason we're on this planet, if there's an afterlife or if "dead is dead". What makes this film so scary to me aren't the wolves, but the fact that it encapsulates so much of what we fear as human beings, our fear of heights, flights, drowning or dying alone.

The number of survivor starts declining and surprisingly most characters die from the very things I mentioned. The most memorable death to me has to be that of Diaz. The one character we thought would never give up finally gives in accepting the fact that we all die one day.

"What I got waiting for me back there? I'm gonna sit on a drill all day. Get drunk all night. That's my life. Turn around and look at that. I feel like that's all for me. How do I beat that. When will it ever be better? I can't explain it."

At his final moments, he's alone admiring the scenery. We only hear the faint sound of footsteps getting louder as the wolves come closer. Death is approaching. Diaz' last words are "I'm not afraid", and unlike the first time he says those words we actually believe him.

Eventually Ottway is left all alone. He looks up at the sky and calls for God. "Do something! Come on, prove it! Fuck faith, earn it! Show me something real. I need it now, not later, now! Show me and I'll believe in you till the day I die. I swear. I'm calling on you. I'm calling on you!" Nothing happens. "Fuck it, I'll do it myself."

I'm sure I'll quote that last line for years to come, because it rings so true. All my life I was told to pray for things I wanted, to pass an exam, to get accepted into university, to stay healthy. "Just leave it to God." has been said to me over and over again at times of great frustration. But I never believed the world worked that way. I had to study to pass the exam, improve my grades to get accepted into university and avoid various harmful food or drugs to stay healthy. I had to earn it. I believe God helps those who help themselves.

Anyway, we reach the much talked about ending. The most heartbreaking moment to me is as Ottway looks into the wallets of all his now deceased friends. He looks at family pictures and learns what each character was fighting for, family. When he flips open Diaz' wallet, all he sees is a driver's license and it's utterly heart wrenching. Ottway wraps his hands on the wallet forming praying hands. He finally places it with the other wallets, all assembled to form a cross.

We learn that Ottway's wife has died at the final moments of the film. Natasha Richardson, talented actress and wife to Liam Neeson unfortunately passed away due to an untimely skiing accident two years prior to filming. I can't help but wonder if some of Neeson's real emotions translated into the film's core powerhouse performance.

Like faith movie interpretations aren't as simple as black and white. I think "The Grey" could be interpreted both ways depending on how you look at it. One could argue that no miracle happened, he ends up surrounded by wolves, dies alone and that's the end of it. But one could also argue that the appearance of the alpha wolf is exactly what he asked for, a sign from God. The wolves finally showing up might be seen as proof that there is a God who wants him reunited with his wife. After all, his suicide attempt was interrupted by a howl and maybe this is God's gift to him, a way to die without having to actually kill himself.