A Special Trip to Disney Vaults Shares the Magic of “Pinocchio”

For most of us in the United States, our knowledge of "Pinocchio" comes from an 88-minute 1940 animated feature produced by Walt Disney Productions. When Disney announced that the animated gem is coming out of the vault, the company is talking about an actual vault in a secret location. Last month, a few lucky journalists went into that vault to learn more about the creative process behind the wooden puppet who wanted to become a boy.

This Walt Disney Signature Collection release on Blu-ray includes a new rendition of "When You Wish Upon a Star," rare artwork from the Pleasure Island sequence, archival recordings of Walt Disney during the film's production and a restored 1927 animated short of Oswald the Lucky Rabbit.

Fox Carney, manager of research at the ARL, said that "For a long time, it was known as Disney's Secret weapon." The archives were used for informational, educational and inspirational purposes where "generations of artists can learn from it."

For those unfamiliar, Carney explained, "Concept art helps define our environment" and by doing so, "helps define our story." Story art is "what exactly is going to happen."

The problem is always "how do we make this story engaging?" In the original tale, Pinocchio "was a bit of a brat" and while the animators "started down that road" and even did animation on some scenes, Fox explained, "It just wasn't working; the character wasn't appealing." Looking at the preliminary sketches, one sees a thinner, gawkier character. Fox related that one animator drew a warmer, rounder and more appealing character that looked more like a boy and the Disney version of Pinocchio was born.

Instead of a brat, Pinocchio became "an earnest, innocent who goes through a learning process." One of the Blu-ray features is a deleted song, "Three Cheers for Anything" which was meant to be used on the journey to Pleasure Island. The boys were thinking of "all the rotten things they're going to do, like swiping a pie or telling a lie." Yet that sequence seemed to drag and for better pacing it was cut.

Sketches show that at one time, the animators considered calling Pleasure Island Boogey Land instead and focused on eating candy. That changed and even with all the items they have about "Pinocchio" they don't have everything. Fox notes that while "Pinocchio" was being developed Disney Animation moved from the Hyperion Studios to Burbank and a lot of related artwork was tossed. 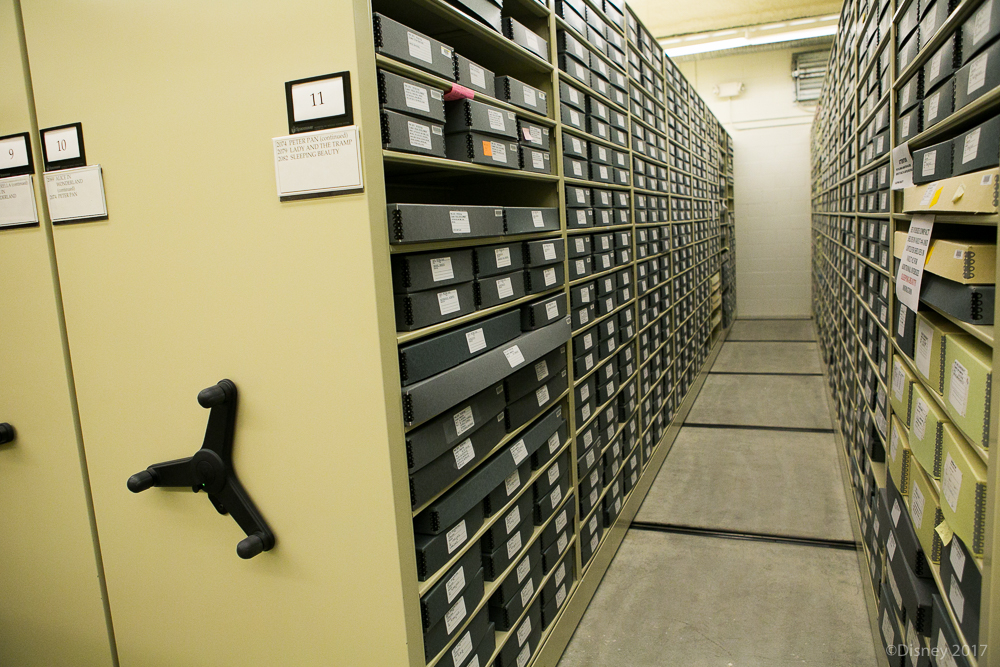 The ARL spends about a year, cataloguing every single story and concept art, dealing differently with various artistic mediums. Softer mediums, like pastels, require a pastel tray. Other pieces, such as the maquettes are stored in one specific vault. Other vaults are in chronological order. One department digitally photographs the pieces so that Disney artists can have access to the pieces more easily. Each request, however, even in company, is carefully vetted out.

Fox stated that the ARL must "think toward anniversaries" because something might become part of a Blu-ray, but they also "think toward types of art that need intervention." What things need to be saved now that better ways of storage and preservation are becoming available.

The ARL is evidence of just "how forward thinking he was. He started in animation" and perhaps that's what made him value the art so much. Yet Fox also commented that Walt Disney was always thinking, "How do we make animation better."

Think of "Snow White," "Pinocchio," "Dumbo," and "Bambi." Fox compared that kind of animation community to "being in Renaissance Italy" with all the artists coming together. It wasn't just art; it was also science. "They had to use a lot of math to figure that out" how to make different shots. Then there was the chemical formulas in paints for different effects. To make better animation, the artists did life drawings and studies of humans and animals. In "Bambi," you have animals, but they have personality.

If you're looking for Disneyana, Walt did give things away. Fox stated, "We do keep our eyes on auctions" and will bid "if we have a gap in our collections." Sometimes, they win and sometimes they lose. They did get some Snow White art from a collector. Some of the "Sleeping Beauty" art is owned by a Japanese university. Now there's more of a protocol about archiving and storing the art. 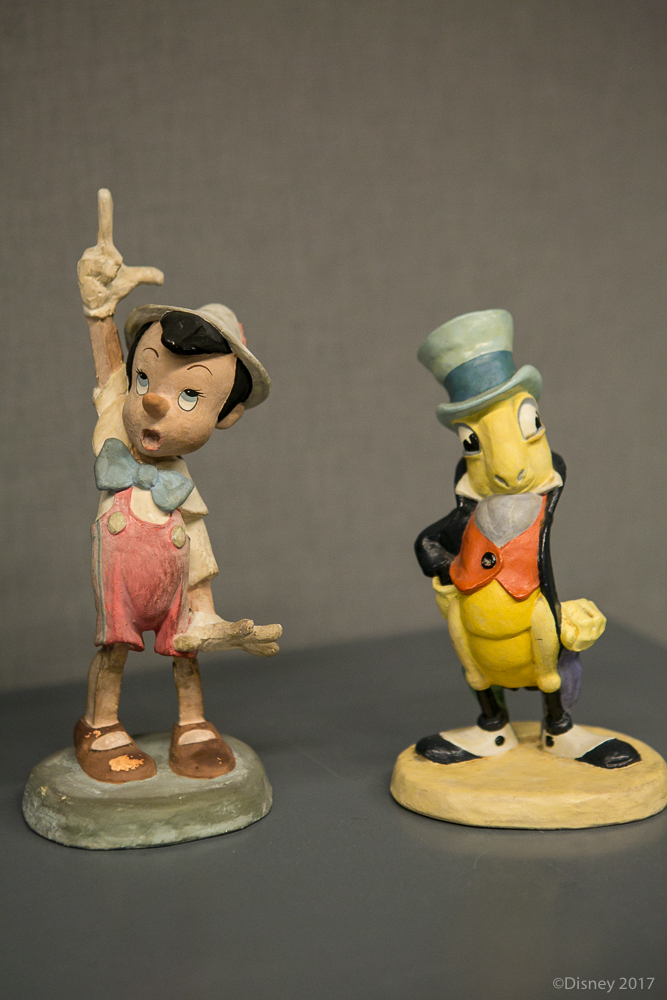 According to J.B. Kaufman, film historian and author of Pinocchio: The Making of the Disney Epic, "It's not secret that 'Pinocchio' was one of the real pinnacles of the art of animation." Kaufman doesn't like making comparisons, because from a historical perspective, "Walt was always interested in pushing the envelope in every way." While "Snow White" set a standard for character animation, "Pinocchio" "maintained that standard and refined it." while adding a whole new level of effects in animation.

"The scene that gets cited a lot is the morning after Pinocchio was turned into a boy," Kaufman explained, noting that the camera swoops over the rooftops. The scene was shot horizontally using the just developed multi-plane crane which was also used it in "Snow White" and tracks like a dolly shot. Yet on top of that you see animation of pigeons and people running around. The scene was actually divided into six parts and "it took months to do that. It was very, very expensive."

Lesser known special effects involve the last part of the film where Pinocchio goes underwater. The light patterns were animated in black and "the negative was exposed and used to represent the light patterns you see on the floor of the ocean." Shapes were cut out of blue construction paper and "shading was done individually for each from with black and blue ground up mechanical pencil lead. On top of that, they were using wash off release cells to simulate the foam on the crest of the waves. These were all "piled on each other in such an elaborate way and such a subtle way, it's easy to miss these things."

When Pinocchio and Geppetto are in the whale, there's a lot going on as well. There's an amazing amount of detail and layering of effects even though the scene is relatively short.

Kaufman also noted that in the first scenes of Geppetto's workshop, "There's a lot of wit there" with "so many different designs of clocks." Kaufman added that the animation team "built working models of some of those cuckoo clocks" because Walt Disney "would look at some of the designs and say that would never work" and the animators were determined to prove him wrong. 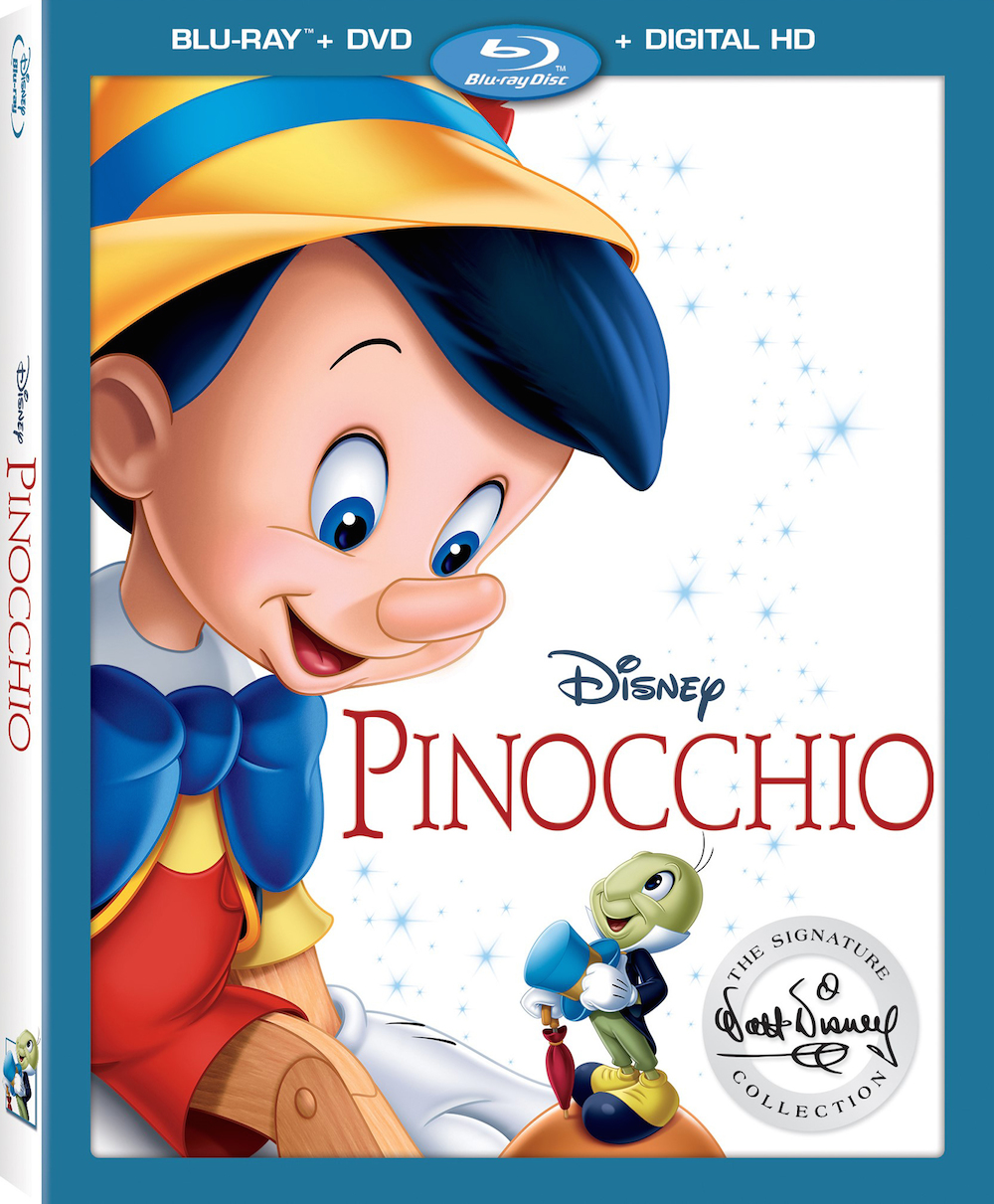 All those details helped "Pinocchio" become a classic tale about a beloved toy that wanted desperately to become a real boy and found that there were people and temptations that lured him away from being a good son. Most famously, Pinocchio was caught lying, causing his nose to grow. In the end, a loving sacrifice made his wish come true.

In today's world, Pinocchio and his nose have become synonymous with lying. There's a Pinocchio Test for lying disorder and the Washington Post has using "The Pinocchio Test" as a "standard in fact-checking the claims of a politician, political candidate, diplomat or interest group." The fact-checking column began in 2007 for the 2008 presidential campaign. It was revived and became a permanent feature on Jan. 11, 2011. When the Washington Post rated Donald Trump versus Hillary Clinton, they used the Pinocchio Test. Absolute truth is rewarded by a Geppetto Checkmark.

Italian Carlo Collodi nor Disney could have guessed how absolutely essential this family classic would become to understanding the political conversations to many years later. There are good lessons for children here: Pinocchio learns that going to school, telling the truth and being kind and courageous are what it takes to make your dreams come true, even after you wish upon a star. These lessons about family and friendship, truth and love are more valuable today than ever. As we go forward, let's try to earn Geppetto checkmarks so that our dreams will come true.

To order your own copy of the "Pinocchio" Walt Disney Signature Collection Blu-ray, click here.