A marriage made in Hell 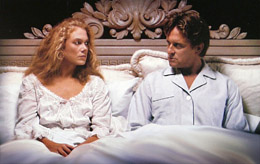 I've had to defend myself for loving "The War of the Roses" so much. The majority of people I've discussed it with found it too mean-spirited. I realize it deals with an ugly subject but this is a prime example of a movie being great at how it is about its core subject, no matter how touchy. This is one of my all-time favorite films.

"The War of the Roses" is surely the best thing Danny DeVito has ever done. In discussing him we may not be talking about the most renowned or prolific film director but I doubt there is any other living filmmaker who could have made a better movie with this particular material. It seems to fit his personality so well. DeVito is a guy that I can't help but admire. His sensational Louie DePalma character of "Taxi" fame was voted as the best ever on TV guide's 50Th anniversary and this could have never been done by just anybody reading the lines as written. Here is a round, balding, five foot man who became a star of the screen thanks to personality and true genius.

DeVito had a decent directorial debut with "Throw Momma from the Train," but in retrospect that movie seems like an exercise in the style that he mastered here. There is an incredible attention to detail in every shot and scene of "The War of the Roses." While watching it we can sense the director having a ball with this material, fully aware of the great script he got to work with and the exact approach it requires. 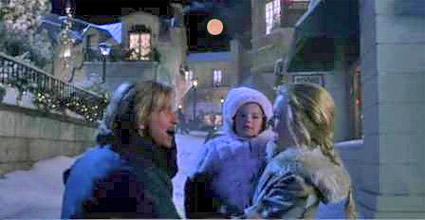 "The War of the Roses" starts with a fairy tale feeling but quickly evolves into the blackest of comedies. This could have truly been a terrible movie in the wrong hands. The film depicts the journey of Barbara and Oliver Rose (Kathleen Turner and Michael Douglas) through two decades in their lives in a marriage takes them from love and happiness to mutual disgust. DeVito plays Gavin D'Amato, Oliver's friend and business partner who narrates the story to a poor soul of a client, a man of few words (or none) who Gavin realizes might be going in a path similar to that of our heroes.

"The War of the Roses" is one of those rare comedies in which countless lines are memorable and hilarious, but what makes it unique is its visual style, told mostly through DeVito's own eye-level POV -- which makes all taller characters look like giants. There is a constant use of odd angles that seem to spring from the subject matter and never feel gratuitous. The film comes alive with countless visual and audio gags such as those showing the steam related to the "pissed-on fish" and the sizzling sound of frying onions while Olivier is stuck in the sauna, with his subsequent recovery by drinking what seems like a gallon bottle of Gatorade. The film is also full of oddities designed to constantly unsettle the audience, like the presence of the loud and overweight children and the constant handling of raw liver. What can one say about a comedy on divorce that manages to include a monster-truck jumping scene? Anything goes. 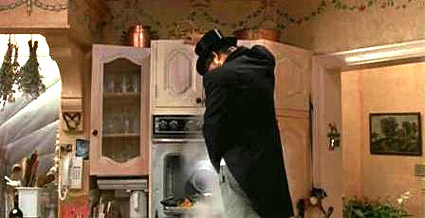 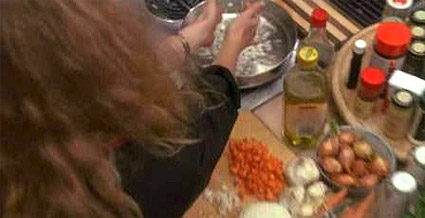 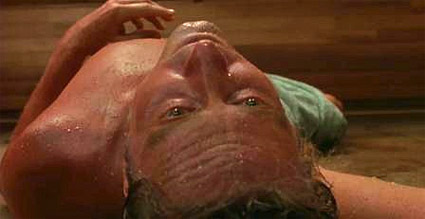 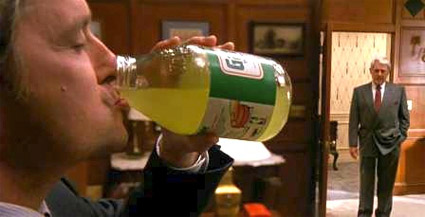 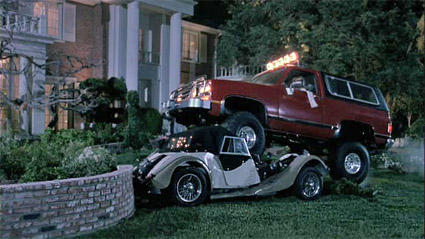 One of the most enjoyable aspects of "The War of the Roses" is its merciless attitude toward lawyers, from Gavin's auto-critical attitude to Oliver's self grandiose poise. There's also Barbara's stone-faced attorney played by the late G.D. Spradlin, who will only dare to show a smile upon being referred to as a "tiny little infinitesimal worm-like prick" by Oliver (this surely tells him he has done his work properly). 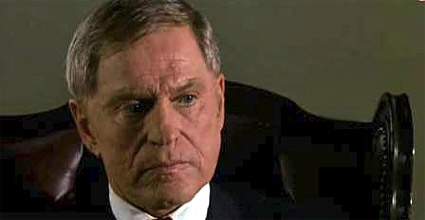 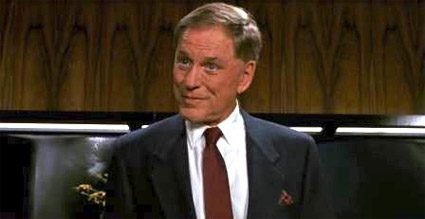 "Roses" isn't even kind to the usually sacred children or animals groups, even though DeVito does relent for the briefest of moments by pardoning the life of Bennie the dog, which I guess spared the movie from the wrath of even more people. Was he right in caving in, if just for a second? Much like Roger does in his "A Fish Called Wanda" review, I'm perplexed by some audience's concern for on-screen animals and their simultaneous lack of the same for humans -- but in this case, DeVito's canine point was nonetheless made and his audience cringed (if only for the briefest of moments), which in retrospect should be enough. 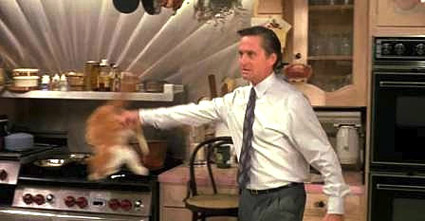 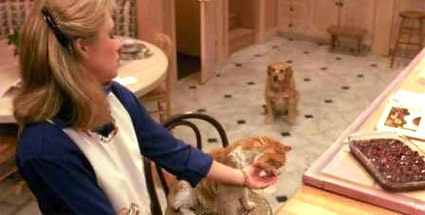 Behind the greatness in "The War of the Roses" is the fact that no matter how outlandish the scenes and how silly the two main characters always end up looking, there is an implicit truth to them. As Robert DeNiro's Al Capone once said (regarding an all-together different subject) "we laugh because it's funny and we laugh because it's true." An old teacher of mine who taught about the peculiarities of Family Corporations, always used to say there can be no worst hatred than that between family members who once loved each other and I believe this explains why some people involved in family rifts end up doing things totally out of their character.

Barbara and Oliver Rose seem like nice and loving people when dealing with just about anybody else but each other. Then they get to play monsters. Even though there are plenty of psychological aspects to discuss from a subject of this nature, we have to remember this is not a movie about the causes of war so much as the fun of the war itself. Sure, it is rather obvious that Oliver became a controlling husband and has a knack for putting down his insecure wife, with Barbara in turn going completely "medieval" on him, something that even at the very end he cannot comprehend. "Love means never having to say you are sorry," but the Roses prove it surely can never hurt.

The film becomes a critique of materialism and consumerism as little by little the Roses destroy the contents of their tacky-taste house that they spent a lifetime collecting. The film finds the perfect excuse to claustrophobically keep these characters together all the way through as both refuse to relent on their absurd quest. We end up recalling the fire which burned their Christmas Tree and wish it had taken the whole house along, as it would have been to their benefit to rid themselves of the subject at the center of their dispute.

Much has been made about Turner and Douglas' screen chemistry, but what's truly amazing is that it translated to roles of absolute hate as well. "The War of the Roses" is yet another of the films of the period in which the latter played a character who was tormented by his leading lady (Demi Moore and, Glenn Close also come to mind) and I've always doubted this to be just a coincidence as he's always seemed to have a talent for playing the victim of strong female figures. Gavin recalls his father telling him "men can never outdo women when it comes to love and revenge" and right or wrong, this clearly became this film's personal philosophy.

Whatever both character's numerous faults, only Barbara is depicted as wholly cold-hearted from a certain point onward, going so far to reject Oliver in her last breath. This is the reason why I can personally explain the slightest of personal sympathies only for Oliver, though I realize this kind of reaction may also depend on the sex and personal experiences of each individual viewer. 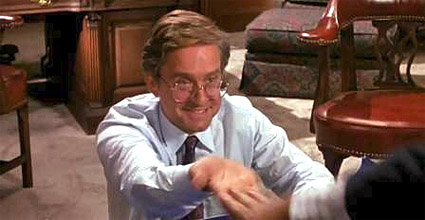 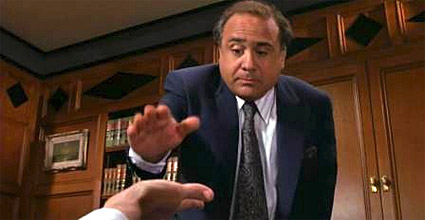 "The War of the Roses" is relentless in its approach. We are shocked when two thirds into this ride Gavin tells his client: "so far this was a normal divorce story, but you may need a drink to listen to the rest" and the last chapter certainly doesn't prove him wrong. The violence here sometimes resembles a road-runner cartoon but the movie never ceases to be funny. 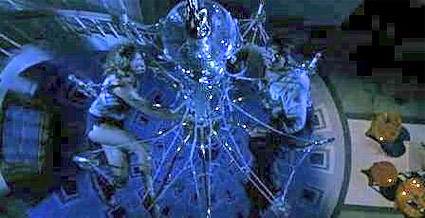 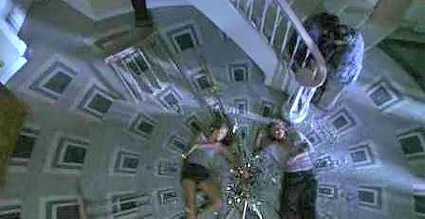 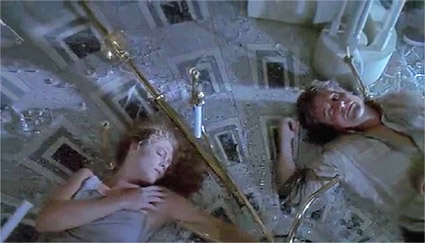 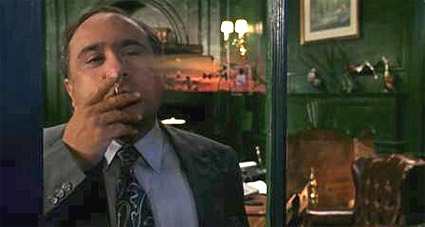 Upon its release, "Roses" was heavily criticized for its nasty, unhappy ending but the truth of the matter is that any kind of reconciliation between these characters would have felt phony, as the couple we've grown to know have nothing to do with the concept of happiness. At any rate, when the credits roll we realize it was the DeVito character that gradually became the central focus of the story and he in turn has become a voice of reason, a loving husband and an overall good man. Heck, he's even become a lawyer willing to yield his fee for his fellow man. Now that's your happy ending right there.