A man who lives between Here and There 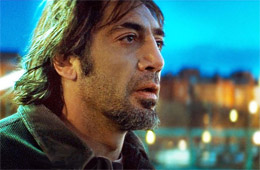 Alejandro González Iñárritu's "Biutiful" was utter torture, and I loved it. Javier Bardem is Uxbal, a soft-spoken man living somewhere along the border between Here and There. He gently hides from life in some anonymous place in crowded, noisy Barcelona. He is a hustler, compassionately exploiting families of undocumented refugees from other lands, protecting them from deportation. He is a telepath, speaking to the newly deceased, helping free their crossing to the next world. He is a son who hardly knew his father, and a father seeking to nurture his own little daughter and son against the pull of an unpredictable ex-wife and an irresponsible brother. But, what does he seek?

Iñárritu's Barcelona, is less like Woody Allen's in "Vicky Cristina Barcelona" (2008), (also starring Bardem) and more like Stephen Gaghan's Arab Emirate in "Syriana." Meaning, it is not an exotic destination for epicurean quirkiness, but is instead a two-sided society. To the world, it is an opulent city providing multicultural welcome to merchants, travelers and immigrants. Mixed in with the electric energy, it is a metropolis that squeezes, crushes, and alienates the otherwise robust humanity of hopeful foreigners and their families. 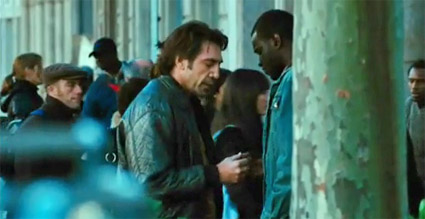 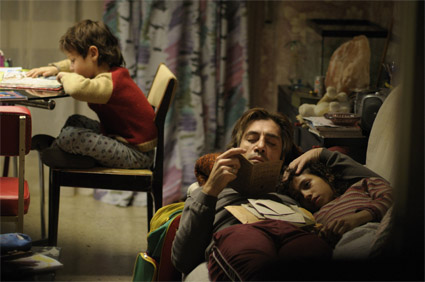 And, here we have Uxbal, a son of the soil. That is not to say that either Iñárritu's Barcelona or Bardem's Uxbal is two-faced or counterfeit like the purses his "employees" distribute. Rather, the city and the man live in the world handed to them, and seem totally genuine. He works in his environment making the best of the skills and talents he possesses, as a hustler, a telepath, and a father. Though there are hints he had a past life of charm. Like Laurence Fishburne's Furious Styles in "Boyz N the Hood" (1991), however, there is no indication that he does anything anymore for enjoyment, except to keep company with his children when he is not working tirelessly for their futures. Unlike his environment, however, Uxbal is a gentle, modest, man, struggling to keep his composure in this messy city. He speaks in whispers. Dresses in simple clothing. Conducts himself with modesty. Even holds his money with gentleness. I feel almost as though I could watch an hour of Bardem tenderly holding things. 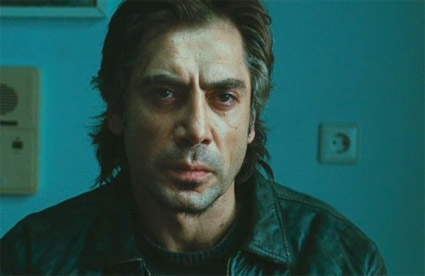 But, Uxbal is a man at the border. Though he can see the dead, he gets surprised to find out he himself is at the end of his life; perhaps if he visited the doctor earlier, his prognosis would have been different. But, some of us would rather live with pain and blindness than to find out we are sick. Meaning, each of us faces some of our reality, but most of us hide from most of them. But, because we know he is dying soon, every scene becomes an exercise in anguish. And, I loved it.

So, if you were to find out you were dying in a few months, what would you seek? Those moments are some of my favorite moments in cinema: those moments when our characters must decide what to do when facing the unstoppable hands of fate. Malcolm X sits in a boat in Cairo realizing that he has again been hit with the blinding light of guidance. Having just resolved his debts, Cosmo (in "The Killing of a Chinese Bookie") stands on the sidewalk, knowing he is about to die. In "Titanic" (1997) a mother caringly tells her children a bedtime story as the drowning waters quietly seep into their bedroom. Explicitly, Uxbal seeks to protect his children, and when their well being is threatened, he abandons his gentle voice and demeanor for the fierceness of a mother lion protecting her cubs. 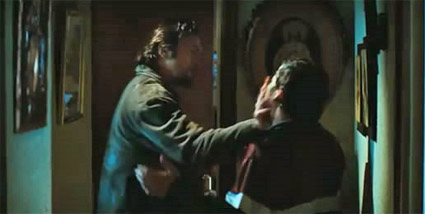 Beyond that, however, as he faces his own dwindling masculinity, it seems that Uxbal wants to give comfort to a few good mothers. As a father and an employer, he is a natural nurturer. But, in at least one case, his compassion leads to complete disaster.

At a deeper level, it seems that he seeks to give and receive love. He caresses his exhumed father's face. He seeks tenderness from a teacher who provides him with parental affection and guidance. He reunites with his estranged ex-wife, though that relationship repeatedly stops short of its own disasters. He embraces his sincere son, who suffers from the stresses by wetting his bed and blaming himself for the family's problems. Finally, he hugs his delicate daughter, clutching her tightly while their heartbeats join. 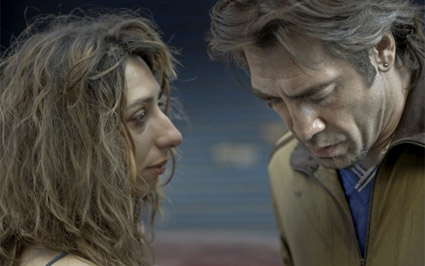 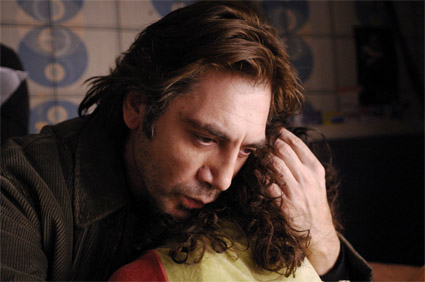 But, at an ever deeper level, he seems to seek something even simpler. This anonymous man in this giant international city seems to want merely to be remembered. That is his one request of his daughter. And, to help the memory, he gives her a memento: his mother's ring. And, then his work is done, and he is ready to enter the quiet wilderness of the next world. It is interesting that a man who knows of the next world as a certainty, still seeks to remain in the heart of his loved one, in this temporary world. Perhaps, in this hectic, fleeting world, our memories are the most permanent of our possessions.

Or, maybe he is just behaving the non-rational way a father would behave. It's just bizarre. Any parent knows that parenthood is non-rational, irrational love. Benevolent insanity. The Movies take that insanity to levels unimaginable. Years ago, I was just mesmerized by "Monsters, Inc." (2001) because the precocious little girl Boo (Mary Gibbs) looked and spoke just like my tiny daughter. Fixed and frozen, I could not stop looking at Boo. Holding my breath, did I exhale during that movie? A few years later, I was again frozen, but by five year old Lara (Ashlyn Sanchez) of "Crash" (2005), who used to sleep under her bed, hiding from the scary noises in her neighborhood. And, when she raced to save her father from a gun toting wretch, I nearly screamed in that theater. Now, the first moment of "Biutiful" has done it again. As ten year old Ana's (Hanaa Bouchaib) gentle, lanky fingers curiously explore her father's caressing hands, again I was captured. Not once, but multiple times.

"Biutiful" was an amazing experience. As soon as it finished, I wanted to watch it again, immediately. Every frame is rich with such interesting, relevant detail. The performances are not just amazing, but stunning. And, Bardem's performance was just as complex and intricate as the Barcelona that surrounded him.

There is growing list I give to my children of movies I want them to watch when they get older, to help them know how, through the years, I appreciate and regard them. Biutiful is now on that list. Hopefully, they will watch it. And, if I have passed on into the next world, hopefully, it will remind them of me.