A lifetime in five minutes 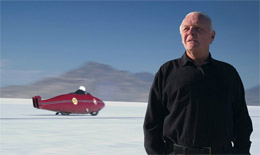 When I watch Roger Donaldson's "The World's Fastest Indian," (2006) it makes my day. Burt Munro (Anthony Hopkins) is a contented New Zealand eccentric tinkering with a motorcycle that he dreams of racing in the Bonneville Salt Flats. It's the story of a man trying to be the fastest motorcyclist in history. He has had the fortitude to fiddle with his bike for over 40 years until it is finally ready. Forty years. More than that, it's a true story about a square peg poking his way through a world of circles and triangles, discovering all the different Americas. It's a romantic comedy, for monks. Like me.

I've been suffering mid-life crises since I was fifteen. Maybe earlier. The pressure to conform, to succeed, to win, to dominate, is so deep in our culture that it's oppressive. Add to that, that I'm from Chicago: we don't just elevate our heroes, we deify them. Add to that, that I'm a Pakistani, which carries with it all those Asian stereotypes about academic and professional dominance, though with its own Pakistani humor. Some of my peers succeeded in the most admirable ways. Others buckled under the pressures and rebelled against all things sacred. In my case, for whatever reason, I've lived a lifetime just trying to learn how to be me, with all my quirks and edges and unorthodox ambitions. So, movies like this remind me that that approach is perfectly fine.

I have to admit that when I first picked up this movie, I thought it was something entirely different. I thought it would be like that cute Disney movie, "The World's Greatest Athlete," (1973) except starring a Desi (South Asian). Needless to say, I was a bit wrong. The "Indian" here is a classic motorcycle from the 1920s. And, an untouched Indian looks the way a motorcycle from the 1920s would: something a few steps above a motorized bicycle. Function over form. Lots of exposed painted pipes. Soft plain tires with lots of spokes. An engine that might operate a lawnmower. Munro's revamped machine, however, looks more like something from an early 1920s prequel to "Tron." When he puts its red shell on it, it looks like a mixture between a surfboard, a rocket, and a fish. 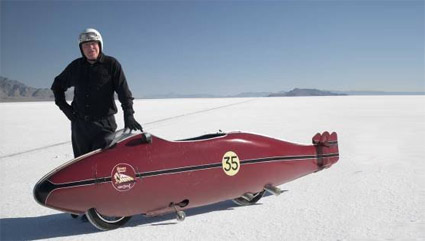 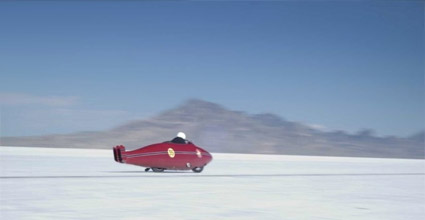 And Burt Monro is his own character. Anthony Hopkins is a master at playing white haired White people in ways that are always uniquely flavorful. His Burt Monro chuckles along while recalling bits of organic wisdom. He lives in his garage on an abandoned lot, begins his mornings by urinating on his lemon tree, lives off a monthly retirement check, and spends his day experimenting with the precision of a scientist and the wisdom of a shaman as he keeps improving his beloved motorcycle. He mentors the little boy from next door with the tenderness of an outcast grandfather. While his neighbors in the mispronounced Invercargill, New Zealand cast their disapproval on him, daily, he seems to still cherish their love more than their blames. He nods politely and quietly when receiving reprimand for breaking rules. It's not a contradiction that even though he dislikes those criticisms against him, he easily tells people to stop their bad habits (smoking and drinking). Rules, for him, are arbitrary and often unnecessary, unless they promote benefit or prevent harm. Rather, when we develop a deep love for something, our whole outlook, theology, and ambition follows accordingly. His love is either for his bike, or the speed records he hopes to break, and everything else in the world is arbitrary and unnecessary. 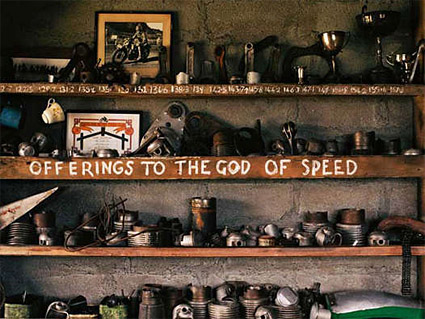 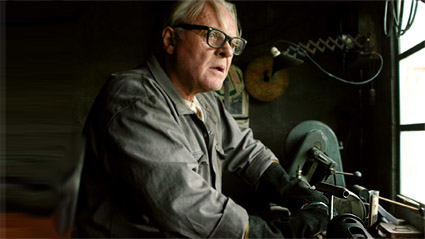 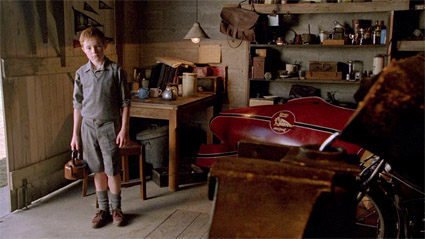 The casting in this film is just perfect. In the background of what is partly a road movie are two-dimensional cartoonish characters that manage to be their own square pegs: a transgender hotel clerk with a soft soul, a Native American Indian grandfather, a happy spunky widow mourning her son, a Salvadoran used car salesman who negotiates fairly, a wide eyed off duty soldier. Further in the background are one dimensional characters that still manage to be necessary and targeted. Federal agents, highway patrolmen, bartenders and barflies. On the one hand, all the characters here are still somewhat stereotypes. On the other hand, they are all consistently amiable, happy people. I suspect, though, that we are not simply looking at Roger Donaldson's choices in making the characters merely likeable. Rather, Donaldson is showing us the world through the fiercely hopeful mind of Burt Munro. And, it is not that Munro is naïve. He recalls the loss and violence he has seen. And, we do not learn much of any loss or violence that he has caused. Nevertheless, he manages to remain happy and hopeful. 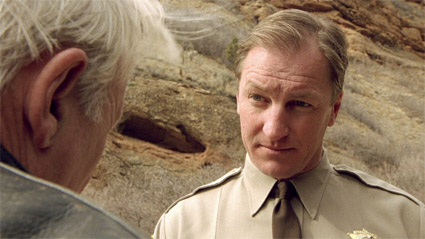 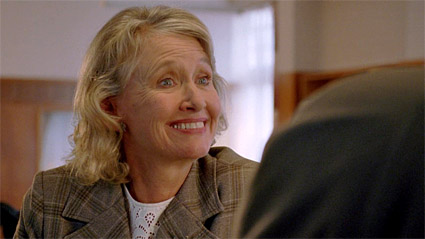 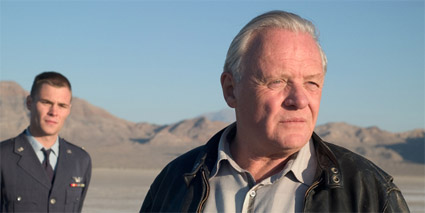 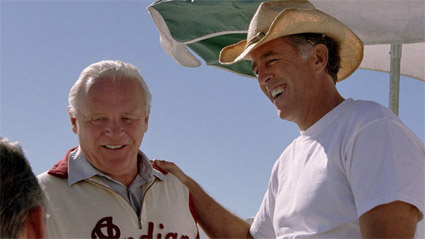 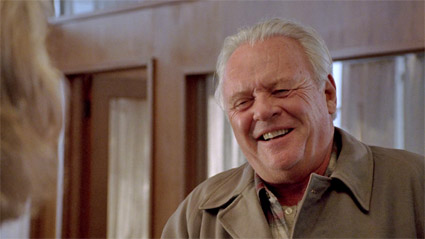 When speaking of Steve Jobs, his former colleagues speak of his "Reality Distortion Field," that would allow him to aggressively look at the world the way he wanted to, and often convince his colleagues to succumb to his vision. The result is that he alienated many, yet he brought unimagined excellence out of many. There is that quality of a reality distortion field in Munro, that seems to leave him as a funky monk of sorts, close to many, yet distant from all in intimacy. Except his dear motorcycle, which he coaxes to exceed levels surely never imagined by its creators.

And because he is such an unstoppable force, most of the plot points are just that. He runs short of money, the box carrying his dear Indian breaks, he loses a wheel, a rattlesnake attacks him. The challenges he faces do not attempt to raise any sort of tension. Rather, they give us moments to appreciate his pleasant determination. The only real challenge, until he arrives in Bonneville, is that his heart is waiting to fail, on its own schedule. Incidentally, he keeps replacing a specific part of his motorcycle, which probably has the same function as a human heart.

Then, however, he reaches his paradise, Bonneville, and the stakes do change. The first America of the film was the land on the other side of the sea, the land of dreams. And for that, he worked determinedly, hoping for the promises of a better life. Second, the confident, hopeful, quirky immigrant drove through the America of big mountains and bigger caricatures. Now that he has reached his elysium, the literal salt of the earth, the cute white haired codger stands alone in this empty field, and fills it with memories, facts, and intense dreams. In the process, he reveals from within the nervous, vulnerable, frightened, irritable dreamer. Now exposed, he crashes into the third America, which reveres youth and discards the rest. Until this point in the film, most of the references to his age were slight and manageable. Now, he stammers while getting mocked and insulted. Short of pulling out the shoe polish to color his hair black, he does use the polish to make his bike tires seem newer, so that he can enter the time trials.

And those moments of speed are thoroughly exciting. We do worry that he will not race. And, when he does, every succeeding moment gets more and more thrilling. Part of our motivation is our own innate joy for speed, made all the more joyous when he shifts gears, jetting ahead of everything. Part of it is our sympathy for this man and his dream. Part of it is our joy in cheering with the other racers cheering for him. And, that is the fourth America of this movie: the wide open America that invites you to soar as high and as fast as you can. This fourth America will do its best to beat you down into conformity in every way possible, but if you can prove yourself to be the best, even if it takes forty years of detailed effort, it will celebrate you. 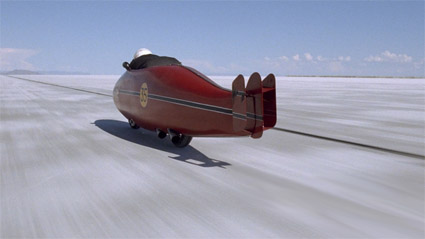 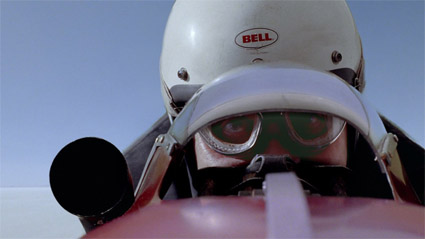 So, as I enter these next phases in life, having jettisoned the 18-34 "youth" market I find joy in doing the things I do, at full speed, tiring out everyone else around me. The main driving need is not to dominate, but to be me. So, such movies make me smile, especially because they are so rare. It might seem mundane as a feel-good underdog movie, yet it is rare because of the stature and temperament of the main character. Movies about men in their sixties are too often about weakness and mortality. This movie, however, is about a gentle man who is inventive and tough. In a movie like "Chronicle," our unhappy young suburban punks have the ability to will objects to float in the air, but they cannot will themselves into joy. In this movie, however, our central character wills the whole world within and around him into a happy place. And, "The World's Fastest Indian" seems to believe we all have that power, and that it gets stronger with age. And that is just awesome.