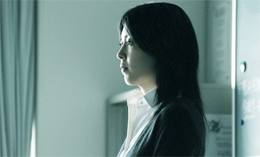 It begins on the last day of the semester at a classroom of some Japanese junior high school. Though they will return to their school after a month, most of the students are very excited while waiting for the time to leave their classroom and enjoy spring break. They are mostly occupied with talking with or texting to their colleagues in the noisy classroom. They do not give a damn about what their teacher tries tell to them, while never imagining the terror she will soon unleash upon them.

Her name is Yuko Moriguchi (Takako Matsu), who courteously begins her long speech along with the brief mention of the recent trial of the milk distribution at the school. A carton of milk is distributed individually to each student at the beginning; all of them drink it as usual under her supervision. In her flat, benevolent tone, she mentions about how it may benefit their biological growth at their age while most of her unruly students do not listen to her at all. 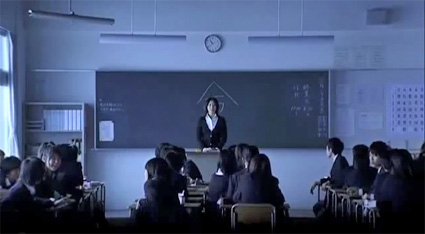 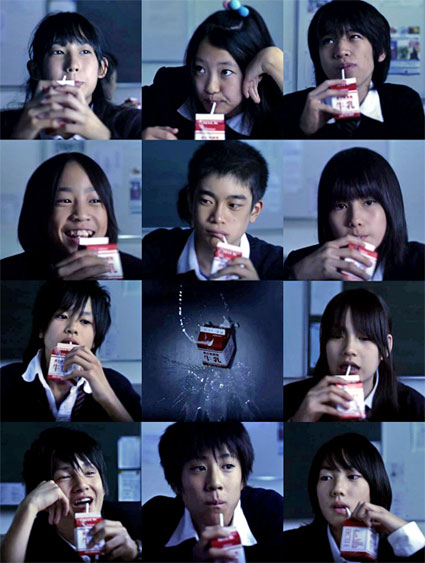 Then, they hear something curious. Miss Moriguchi announces that she will resign from her post - and today will be their last day with her. She talks about a man whom she still deeply loves; he has been a passionate educator who has been well-known around Japan for his books and TV appearances. The students have heard about him, so they begin to show their interest with casual jeers, while their teacher is talking about how, like her lover, she has tried to teach her students with care. But she has been cautious about her teenager students who can cause a trouble because of temporal pique. She exemplifies one serious case in which a female student tries to frame her male teacher just because she wants to get him in trouble.

She says she is sorry for not caring about her students enough, but she seems not to intend to give them a conventionally idealistic farewell speech you can expect from the movies like "Dead Poets Society" (1989). She grabs their attention more with the hidden secret of her private life. Everyone is horrified to hear that, even though their teacher tells they have a misguided knowledge about a certain disease. Some of them hold their breath when Miss Moriguchi walks around their desks while phlegmatically continuing her speech which turned far more ominous than before. 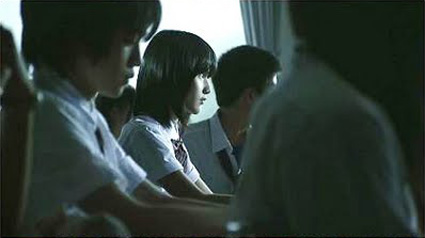 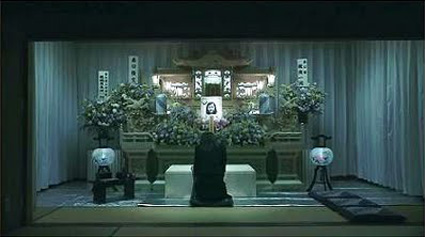 She goes on. She talks about the recent tragic incident that happened to her. Her young daughter was drowned in the school swimming pool, and everyone, including her, thought it was just a very unfortunate incident. But now she comes to know the truth about her daughter's death. The classroom is not noisy anymore while she reveals that. The tension is slowly arising with the smooth, steady camera movement and occasional overhead shots looking over the students. All of the students now fully concentrate on what she is saying. I bet they have never done that before under her tutelage. 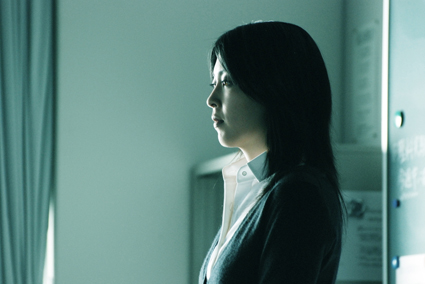 She knows who were responsible for the incident - they are two students in her class. Does she hate them? Sure, she wants to see them punished, but the juvenile law in Japan protects these two students who commit this unforgivable crime. According to the law, the juveniles cannot be tried for the serious crimes like murder for it is judged that they are not fully aware of the consequences of their actions due to their immaturity. The harshest punishment will be merely sending the boys to the correction center; it goes without saying that the authorities will let them out when their rehabilitation is thought to be completed. Therefore, it is no use of revealing the names to them, though Miss Moriguchi reveals everything but their names to the students.

As the ability of an individual has been vastly expanded along with the advance of our civilization, the kids in our time is more capable of doing something terrible. They are young indeed, but what if they know they can get away with the crimes like murder just because they are young? Shouldn't we change our perception? If so, should we treat them like adult criminals?

But it is just my small inconsequential thoughts provoked by an interesting topic. The story moves on from that after striking us with the smashing ending of this long but fantastic opening sequence I described above while not trying to reveal anything crucial to spoil your entertainment. As a matter of fact, this great sequence was so involving that even I, vaguely aware of its synopsis, was fooled enough to believe that I was watching the wrong part of the movie. 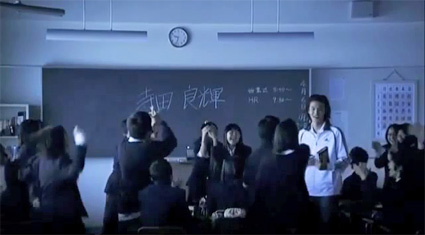 Their new year begins. We see the consequences of Miss Moriguchi's action after she leaves the school. The common secret in the classroom is hidden from a new school teacher, who is so cheerfully oblivious to what lies beneath his classroom that he unintentionally provides more misery to these two murderer kids. Their lives are turned upside down thanks to not only Miss Moriguchi and but also the cruel bullying of their classmates ignited by her action. One of two boys keeps attending his school despite constant taunts and scorns. The other becomes so disturbed that he turns into a little boy version of Howard Hughes on his bad days. He does not even go to the school any more, and he confines himself to his room at his home. His overprotecting mom is naturally frustrated about this sudden change she cannot understand.

A Japanese thriller movie "Confessions"(2010) is based on Kanae Minato's gut-chilling crime novel of the same name. In the novel, each of its chapter is respectively narrated by its five principle characters, and they 'confess' to others and us about their thoughts and deeds. While it has the potential as a terrific audio book, its narrative method is not so easy to be translated onto the screen. The inherent flaws in the adaptation process are apparent. After that memorable start, it is a little disappointing to see that the movie loses some of its steam while constantly shuffling around the viewpoints/narratives of its characters.

However, it is still very compelling to watch despite its unlikable characters and their heinous deeds shown in the rest of the story. The director Tetsuya Nakashima's previous work was "Memories of Matsuko" (2006), which cheerily depicts a very dour tragedy of its unfortunate foolish heroine with the bold, artificial Technicolor style and accompanying bright, cheerful musical numbers. It looks silly, but the clash between the style and the story creates the harrowing emotional effect not that far from that of Lars Von Trier's "Dancer In The Dark" (2000). The movie does not hide the fact it is a black comedy, so it is both painfully hilarious and sad to watch it.

In case of "Confessions", it goes to the opposite direction; the cinematography has cold, gray tone with those ever-present gray clouds floating in the sky in the late afternoon. Many scenes are as stylish and drowsy as the music videos, with frequent slow motions (you can see every droplet whenever something is splashed) for depicting the daily activities at the school - including the savage bullying on the rooftop. We come to accept that the people in the movie are no more than broad caricatures and they are living in some sort of warped reality or daydream. 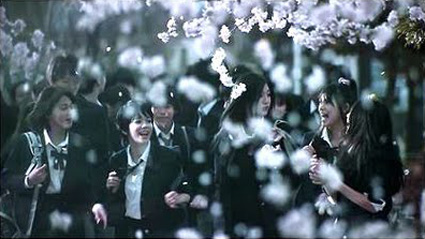 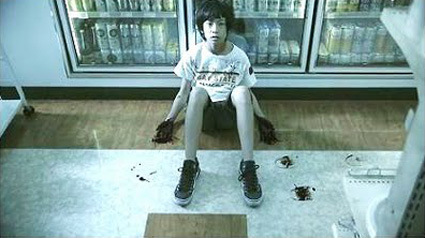 The movie has a savage fun with the several kinds of cruelty committed on the screen. While horrified by the hell in the classroom, we start to enjoy its twisted sense of humor. These two murderers are despicable, but their classmates are equally heartless as a group, who feel little remorse about punishing them with no mercy while keeping happy faces for their new teacher. The soundtrack adds extra black humor. There is a brief exaggerated musical sequence to emphasize how insanely grotesque the situation is, and I have to mention that the movie uses the song "Last Flowers" by Radiohead in a way as memorable as the way "Incendies" (2010) used "You and Whose Army?". In the end, you may not care about whether they will be blown up or not, while still interested in what will happen rather than what will happen to these horrible teenagers.

Even though we cannot identify much with most of the main characters, we find them understandable or pitiable or pathetic to some degree. From these two boys, you may see what might cause the Columbine school shooting or the other cases of school shooting. One of them is lonely but he is also a vain, arrogant boy who really deserves a good spanking for disregarding the value of the life just because he wants to be recognized by someone he cares about. His motif, like his accomplice's, is absurd, but, as shown in the movie, hasn't the media always turned the terrible incidents like the murders committed by teenagers into a big event which may give the wrong impression on lonely, disturbed kids at schools, who want to be recognized for their 'greatness'? Even if the law cannot protect them, they will become famous at least for 15 minutes, which is definitely something they have craved for.

Just in case I mislead you, let's get this very, very straight to you. You will find that the movie is ultimately about the revenge. You will see that it carefully establishes the ground for a maximum effect. Some of the characters are not as honest as we thought - and the story turns out to be more fiendish then we expected. It is eventually revealed that Miss Moriguchi revenge is more calculating than we initially thought. Though we might say they deserve that for their wrong behaviors, she does a lot of harms to not only to her main targets but also to others surrounding them.

Furthermore, her deed eventually opens the ways for other evils, so a lot of people can be hurt as a result. But, laughing at any possibility of melodrama in her situation, she goes all the way with a vengeance. We can say that she has a good reason for her revenge, but is she entitled to do that? Isn't she the one who emphasizes the value of the life with a big Chinese character she writes on the blackboard? 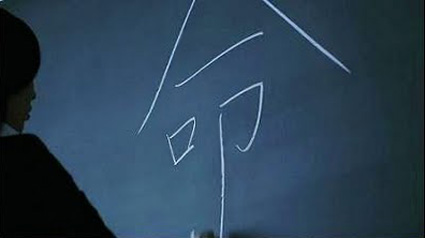 Never mind, because that question does not matter to the movie, which gives us the grand finale as cathartically bleak as required. The Achilles' heel is found. A truly merciless revenge is soon executed as an effective payoff. In the exaggerated moment which might be influenced by the prologue sequence in "The Curious Case of Benjamin Button"(2008), we certainly feel how much a certain character is devastated while literally, and emotionally, plunged into the bottom of the hell. We are sorry for that a little, but, as the perpetrator coldly points out, the target has it coming.

"Confessions" is a cold-blooded psychological thriller filled with dark, vicious humor which smirks at us and the victims even at the very end. With an uncompromising attitude, it handles well its disturbing subject with the impressive visual style and savage wit. The actors give very good performances, and Takako Matsu is polite but increasingly chilly as a graceful but ruthless Nemesis with nothing to lose. Some of you may not like it because the movie single-mindedly cares about serving a dish called revenge very, very cold, but, what the heck, isn't it a diabolically sweet, elegant revenge to be appreciated by the dark side inside all of us?