A glory only for his father 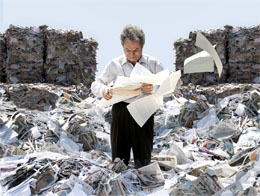 Fathers are usually proud of their sons' achievements, but that is not the case with the orthodox scholar patriarch of the Israeli film "Footnote." His son's success adds another layer of envy and resentment to a lifelong grudge, and he hates when that happens. He has regarded his son and other prominent scholars as a bunch of superficial philistines who merely happen to be more popular than him, but he cannot help but envy their academic positions, and he desperately hopes for recognition as he stubbornly and solitarily sticks to his own uncompromising research methods deep in the library.

Although it is about the people studying and researching in a specific field which is quite unfamiliar to many of us, "Footnote" is a smart and funny comedy driven by human errors and foibles familiar to all of us. The main characters are intelligent experts with vast knowledge in their field, but they can also be quite petty because they do not like each other for personal reasons which look trivial and silly to outsiders like us. 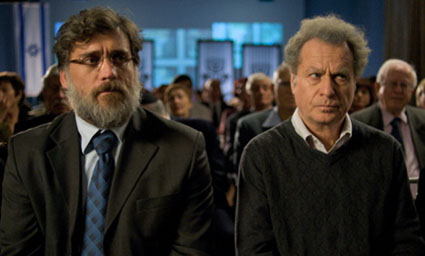 But they are very serious about their work, which indeed has considerable academic value, and some of them live with it until death tears them apart from it. As a philologist at the Talmud department of the Hebrew University of Jerusalem, Professor Eliezer Shkolnik (Shlomo Bar Aba) has dedicated many years of his life to literary study while strictly following his daily routine. He always goes to the National Library in the morning on a fixed route every day, where there is always a place for him. He spends his time with the old texts and records in the library for his private research, and he keeps working even at home. He wears headphones to keep from being interrupted by his silent wife (Alisa Rosen), who must have had many hard years due to his single-minded dedication (he sleeps on a small bed in his library while she sleeps in the other room). 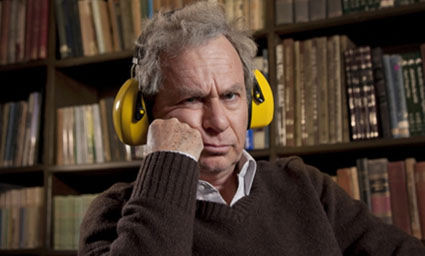 We come to know that there was a time when he was almost about to make a big breakthrough with his ambitious project. By checking and comparing more than 300 books in which the original text of the Jerusalem Talmud was quoted, Eliezer developed a revolutionary theory on the differences between the original text circulated around Europe during the Middle Ages and its current version. It took more than 30 years to nearly complete his research and thesis. His epic efforts may look not that important to us, but think about a recent biblical discussion on whether a centurion's 'pais' healed by Jesus in the New Testament was his servant or his homosexual lover. People have endlessly discussed the intent behind the use of that single Greek word, and that is where philological research like Eliezer's can provide more evidence and understanding.

While appreciating his meticulous scientific approach, my mind went back to some of the scientific research papers published in biology journals I've read during my graduate years. They usually had a big figure showing the alignments and comparisons of DNA or protein sequences from various species, which can provide the valuable clues for the next steps in research, and they all were swiftly done with special software programs. I enter very long sequences of data (usually around 1000 characters) into the yeast genome database available on the Internet, and it can show you every difference between the subject and the database in one picture within 5 seconds. I wonder how Eliezer feels if he sees that everything he had done with painstaking efforts for years can now be easily done with software in several months.

Anyway, he has been sticking to his research method -- even after his big project was made totally obsolete by his main rival, Professor Grossman (Micah Lewensohn), who fortuitously encountered valuable material in Europe and quickly published a paper ahead of his rival. The result was an academic catastrophe: Eliezer never published anything significant again, due to Grossman's constant interference and all he can show to others as his "achievement" is merely a mention of his name in one single footnote in another, famous Talmud scholar's book. Though it seems he is recognized by his few close colleagues, he knows he has been ostracized and ignored by many of his peers, and that fact has always injured his pride as a scholar. 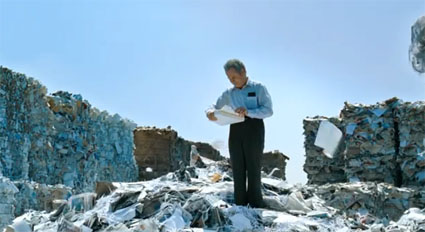 Funny thing is, Eliezer despises the academic success of a man who was actually inspired by his passionate dedication. His son Uriel (Lior Ashkenazi) is a far more popular and renowned scholar than he is, and now Eliezer has to see his son joining the Israel Academy of Sciences and Humanities. As the movie tells you in advance through its title card, this is certainly his most difficult day in life, and his sullen face is not brightened at all even when Uriel shows sincere gratitude to him as a good son during his speech in front of others at the ceremony. He especially hates the fact that his son is on good terms with Grossman, who also dislikes Eliezer.

And then, after several days, Eliezer gets a call, and something too good to be true happens to him. It is a call from the Ministry of Education, and he is told that he is chosen as the next recipient of the Israel Award, a prestigious honor coveted by everyone in the field. Those close to him is happy about this news, although they do not know the exact reason behind the decision. Uriel is flabbergasted about this surprise news because 1) the chairman of the committee which chooses the recipient is none other than Grossman; 2) everyone knows that Eliezer is not so popular with his peers; and 3) there is almost no significant literature or publication in Eliezer's to support this odd decision, but he is pleased to see his father finally being recognized after so many years of obscurity to which he has been condemned.

It turns out that there was a serious mistake due to small confusion; the call from the Ministry of Education was intended for Uriel, not Eliezer. This error could have been rectified quickly, but the news about Eliezer being chosen as the recipient has already been leaked to the media. An emergent private meeting is promptly held, but it turns out it won't be easy for the committee members, Grossman and Uriel to find a solution as they get more personal under pressure. 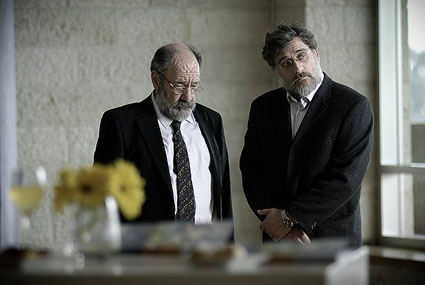 The director/writer Joseph Cedar, who won the Best Screenplay award for this film at the Cannes Film Festival last year, keeps the comic momentum going while the characters' difficult situation becomes uglier and messier for them. There is an amusing sight gag in which the characters have to shift their positions and chairs constantly whenever someone comes in during their clandestine meeting in a small, suffocating office. Their heated arguments are fueled by not only their epic stubbornness, but also by their pettiness, which comes with the territory.

Grossman, a genial but stern old scholar obstinately adhering to his own idea of principles, absolutely objects to Eliezer receiving the honor because it violates his principles. But, if what Uriel says is true, he may also be an unforgiving old man who hides grudges behind principles, and can be mean, ruthless, and unfair. That reminds me of one chief editor of a certain respectable biology journal who always rejected the manuscripts from one professor's laboratory at my campus just because he would not recognize that professor's research in spite of his considerable contribution and well-deserved reputation in his field. That professor once joked that he personally wanted him to die soon (that editor was a very old guy, by the way), but I wonder now whether there was a little bitterness inside his jovial words.

The story ultimately comes down to the personal level as it digs deep into the estranged academic/personal relationship between Eliezer and Uriel, who are driven further apart by this absurd situation. Even after Uriel learns that he does not know him very well through one funny incident involving lost clothes, he still respects and cares about his father. But, when he feels betrayed and insulted, he becomes as cranky as Eliezer, and he turns out to be not a good dad to his own son just like his father wasn't to him.

Nevertheless, he does not reveal the truth to anyone except his mother, who keeps the secret. While Shlomo Bar Aba and Lior Ashkenazi received lots of praise for their excellent performances as a father and a son who are distant from each other but actually more or less than two sides of a coin, Alisa Rosen deserves a special mention for her reticent but strong supporting performance as Eliezer's long-suffering wife. I have no idea about how she tolerated her nearly uncommunicative husband, but, considering that she is an intellectual woman with a PhD degree, I guess she understands and accepts him and his work as a fellow intellectual, and her simple act later in the film implies a lot about how she feels and thinks about her 'autistic' husband. 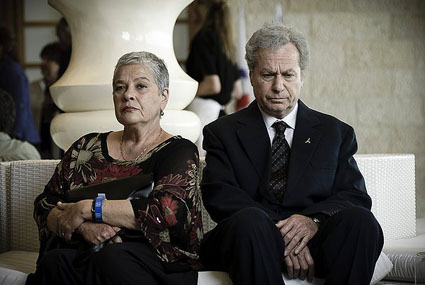 "Footnote" is a very funny film which instantly tickled my past experiences with the academic department I have belonged to for more than eight years as a graduate student. I was amused by its several notable details reflecting the specific geopolitical condition of Israeli society, and I was also entertained by its cheerful approach to the story with exaggerated hyper-kinetic styles. This was regarded as overkill or clever gimmick by some, but I think it perfectly and hilariously fits with the characters' reacting very seriously to the small academic matters most of us do not know or care about. In one exhilarating sequence where Eliezer's stubborn but shrewd mind suddenly starts working as soon as he notices one small thing at one point, we are immediately swept up into his rapid thinking process, propelled by the overblown score by Amit Poznansky, for a cinematic joyride. We do not wholly understand the logic spinning inside Eliezer's head, but his emotional state is as clear as an earth-shattering conclusion he should have seen from the beginning. 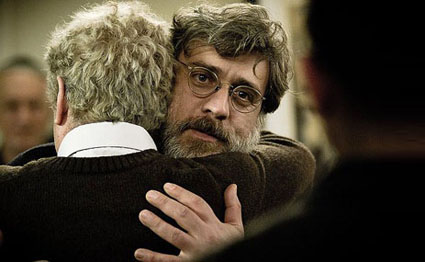 When the movie was introduced at the Busan International Film Festival in South Korea last year, it was introduced as "A Glory Only for His Father". I think that title reflects well the ironic truth which the father, his son, and few other characters in the movie perceive perfectly as everything comes together at the point where a certain decision must be made. Some of you may complain that the ending is too indecisive and too much of an easy way out, but does it really matter, considering that these characters will be unhappy no matter how their messy circumstance is resolved? After revisiting the movie, I thought I had a solution for their difficulty, but, no, I know too well that they are eggheads too proud and egoistic to humble themselves.