JUST BEFORE THE MOON EDGED BETWEEN THE EARTH AND THE SUN, MARKING THE MOST SIGNIFICANT TOTAL ECLIPSE IN 100 YEARS, EDWIN EISENDRATH, the new proprietor, was standing at the lectern of the City Club of Chicago announcing his intentions to keep his recently acquired Chicago Sun-Times running as a newspaper of the people, by the people and for the people. This too was quite a significant pronouncement, considering that the Sun-Times has survived a bankruptcy, multiple owners in a short period of time, challenges brought on by the digital age, and a bid to take it over by the owners of its competitors, the Chicago Tribune. And yet, here it remains, the little newspaper that could. It is needed more than ever, and I join fellow Chicagoans in wishing Eisendrath and his group the very best.

Prior to becoming the CEO of the Chicago Sun-Times, Eisendrath was an accomplished teacher, alderman and businessman, serving as Managing Partner of StrateSphere, LLC, and regional administrator for the US Department of Housing and Urban Development. You can listen to his full speech delivered on August 21st at the City Club of Chicago here. 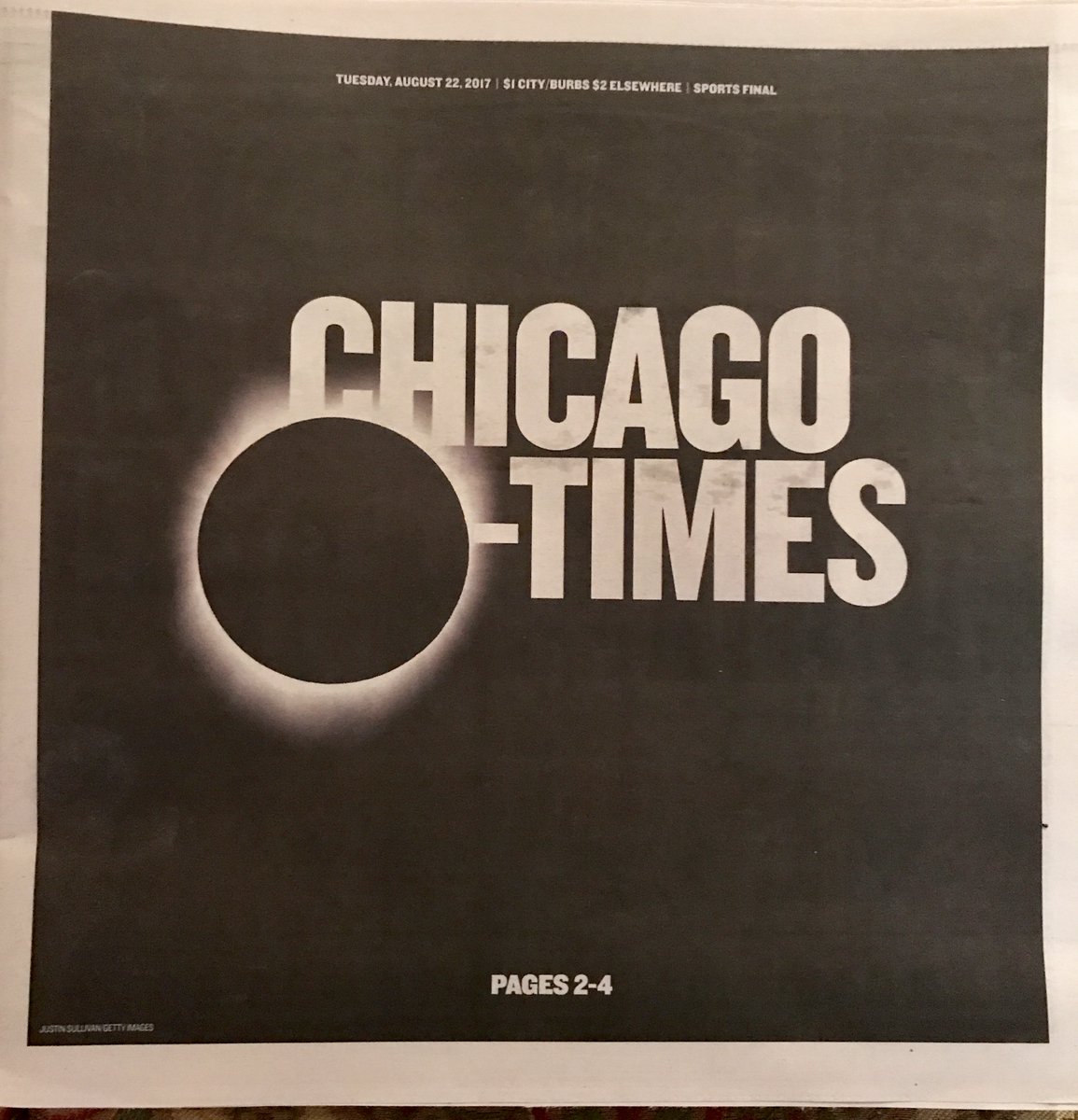 Lore has it that aside from the scientific cosmological reasons behind an eclipse, it is the foreshadowing of renewal. Its symbology is that of getting rid of the old ways and welcoming in the new. And if we are to read anything in the symbology of Eisendrath’s speech occurring at this time of the eclipse, just maybe the Sun-Times will see a renewal of its moniker “The Bright One.”

I still care deeply about Chicago being a two-newspaper town, and especially about one of the newspapers being dedicated to the people. I remember when Chicago had multiple major newspapers and when those newspapers had morning and evening editions. Of course, time, the internet, the loss of advertising dollars, shorter attention spans and a 24 hour news cycle has changed all of that. Life is different, and every year the death of the newspaper is announced. But in this fraught political environment, newspapers have regained an increasing urgency. And media owners are combining both print and digital platforms to meet the needs of today's consumer.

Let's face it, I just love the feel of a newspaper, the way you can choose which articles you want to read before you turn the page rather than being lured by come-on click bait on some internet news pages. I also like the fact that someone has taken the time to research, write and edit it, rather than just pop off whatever unsubstantiated nonsense comes from the top of their head.

I also care about the Chicago Sun-Times specifically because my husband Roger wrote his columns and movie reviews there for 47 years before his death. No matter who technically owned the newspaper, Roger called it his. It was, he said,  owned by him and all of the other great journalists and workers who toiled daily to get it to the presses. And it belonged to the community of people who read it to find out what was going on in the city and to keep the politicians accountable.

In his book, Life Itself, Roger wrote vividly about the atmosphere of the newsroom. “The city room was a noisy place to work,” he wrote. “Typewriters hammered at carbon-copy books that made an impatient slap-slap-slap. Phones rang the way phones used to ring in the movies. Reporters shouted into them. They called out ‘Boy!’ and held up a story and a copykid ran to snatch it and deliver it to an editor. Reporters would shout out questions on deadline. ‘Quick! Who was governor before Walker?’ There were no cubicles, except for Royko’s. We worked at desks democratically lined up next to one another, row after row. Ann Landers (actually Eppie Lederer) had an office full of assistants somewhere else in the building but insisted on sitting in the middle of this chaos, next to the TV-radio critic, Paul Molloy.”

Though Roger first gained his journalism experience at the News-Gazette and the Daily Illini, it was Sun-Times editor Robert Zonka who proved to be a formative mentor. “Zonka taught me his newspaper code, which he liked to express as, ‘When you have to march, march,’” he wrote. “This included writing a story you lacked all enthusiasm for, meeting a deadline no matter what hours were necessary, getting an interview after you’d been decisively turned down not falling in love with your deathless prose, remembering you were there to write a story and not have a good time. These were not rules he enforced. They were standards he exuded.”

Once his TV stardom blossomed, Roger received many offers from publications urging him to move to one of the coasts, but he remained devoted to his “beloved” Sun-Times. He passionately defended the paper even as he promised to join the Chicago Newspaper Guild in going on strike in 2004, in light of revelations regarding the mismanagement of Hollinger International. "You did indeed position the paper to the right of the Tribune, in an overwhelmingly Democratic city and marginally Democratic state," wrote Roger in his open letter to Hollinger chairman Conrad Black, "trumping my proletarian posturing with your own aristocratic, not to say medieval, persuasion. But I admire you for sticking to your ideological guns in the face of the common sense which cries out that the Sun-Times naturally, obviously and by tradition belongs in the center."

Advertisement
Whenever there was an attempt made to dilute the integrity of his paper, Roger fought against it with every fiber of his being and every ounce of his wit. After former sports columnist Jay Mariotti resigned from the Sun-Times and claimed that newspapers were dead, Roger penned a blistering open letter to him, arguing that neither of the major Chicago papers would be dying anytime soon. "I started here when Marshall Field and Jim Hoge were running the paper," wrote Roger. "and stayed through the Rupert Murdoch regime. I was asked, 'How can you work for a Murdoch paper?' My reply was, 'It's not his paper. It's my paper. He only owns it.' That's the way I've always felt about the Sun-Times, and I still do." 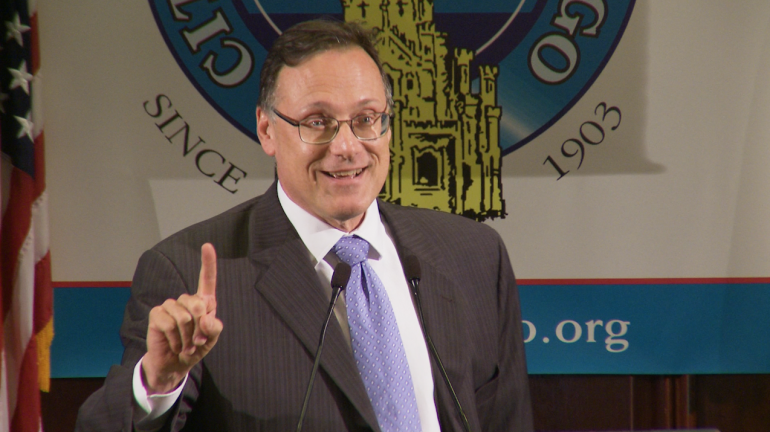 I know that is history and history is not necessarily the future, but Eisendrath's words this past Monday proved to be greatly encouraging. "What I'm most proud of is that Chicago is the kind of a place where labor can step up with private sector leaders and wealthy investors who care about the city and all together to be part of saving the kind of independent voice that our democracy needs," Eisendrath said. "It is true that very young Americans, not just in Chicago, have transitioned their news habits to something else. So we need news that's engaging, and that's important, but we do have to deliver it where they can read it on different platforms."

Over the years the Sun-times has had many excellent journalists and columnists and I still look eagerly for it on my doorstep each morning to read Mark Brown, Mary Mitchell, Fran Spielman, Lynn Sweet, Neil Steinberg, Dan Mihalopoulos, Richard Roeper, Mike Sneed, Rick Telander, Bill Zwecker, Hedy Weiss, Jessie Jackson and so many others. So I say congratulations to Chris Fusco who has taken over as Editor, and to all who continue to fight the good fight.

Here's to many more years of essential local reporting at the Chicago Sun-Times.