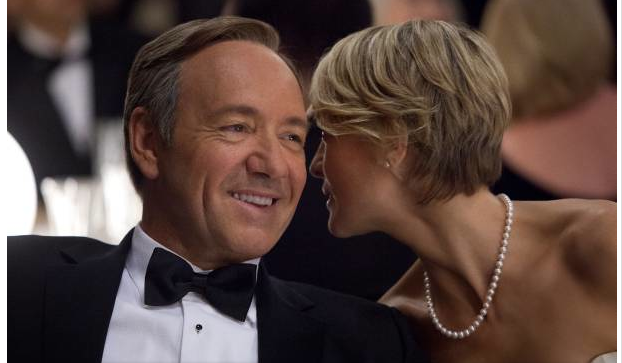 "Netflix storms the Emmy Nominations, but How Much Has Really Changed?" By Linda Holmes, for NPR's "Monkey See" blog. Vulture's Josef Adalian concurs, and thinks Emmy voters were "starstruck" to show House of Cards so much love. At the Tampa Bay Times, Eric Deggans disagrees and argues that quite a bit has changed, actually. See also: Alan Sepinwall's rundown; also at Vulture, RogerEbert.com editor Matt Zoller Seitz offers an alternate list of Dramas and Comedies, and lists his most and least favorite nods. For a complete list of 2013 Emmy nominations, click here.

"The 10 Greatest Shows Never Nominated for a Best Series Emmy." By Peter Knegt and Alison Willmore, for Indiewire. 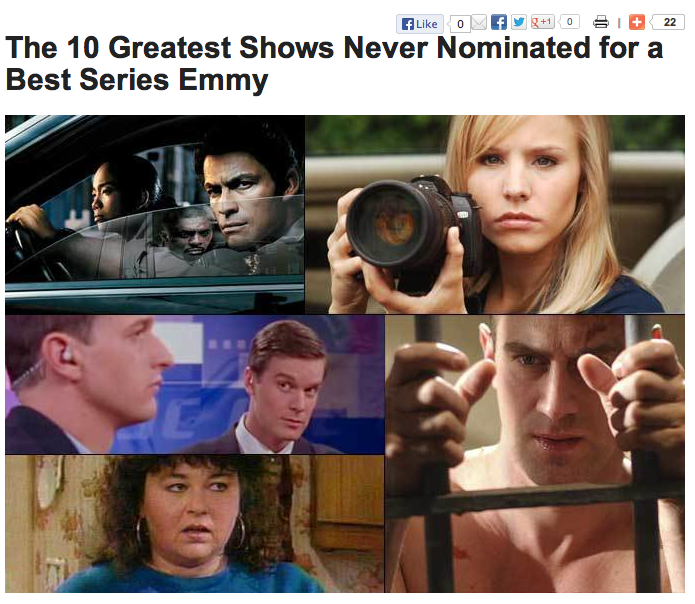 "Roseanne."  Despite extraordinary ratings and critical acclaim (at least during its first six seasons), "Roseanne" was somehow never nominated for best comedy series at the Emmys. Perhaps the show's envelope-pushing ways were simply too much for the generally conservative Academy of of Television Arts & Sciences, who in the 1990s gave "Frasier" five consecutive wins in the comedy category while entirely ignoring Ms. Barr's pioneering sitcom. Which was even more odd considering it did give the series tons of acting love for John Goodman (7 noms), Laurie Metcalf (4 noms, 3 wins), Sara Gilbert (2 noms) and Roseanne herself (4 noms, 1 win). Which all feel like somewhat backhanded compliments when coming without any recognition for the series itself (and only one nomination for writing, which is just as offensive considering how strong it was at the series' peak).

"Save the Movie! The 2005 Screenwriting Book That's Taken Over Hollywood—and Made Every Movie Feel the Same." By Peter Suderman, for Slate. 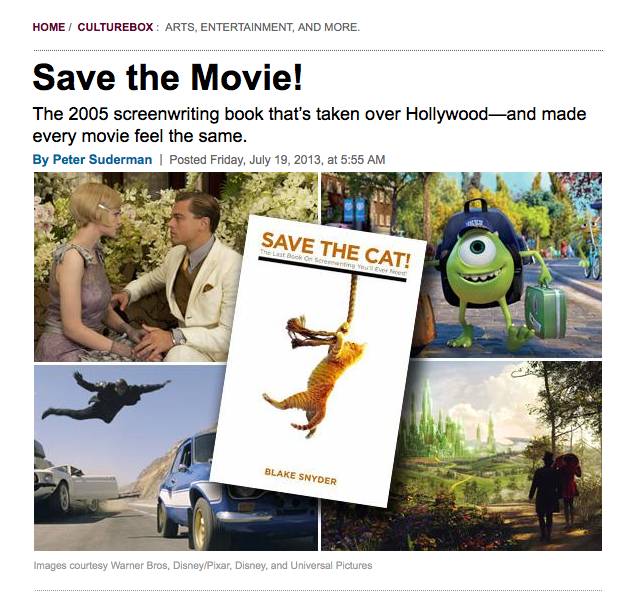 "Summer movies are often described as formulaic. But what few people know is that there is actually a formula—one that lays out, on a page-by-page basis, exactly what should happen when in a screenplay. It’s as if a mad scientist has discovered a secret process for making a perfect, or at least perfectly conventional, summer blockbuster. The formula didn’t come from a mad scientist. Instead it came from a screenplay guidebook, Save the Cat! The Last Book on Screenwriting You’ll Ever Need. In the book, author Blake Snyder, a successful spec screenwriter who became an influential screenplay guru, preaches a variant on the basic three-act structure that has dominated blockbuster filmmaking since the late 1970s."

"Zero Tolerance at ComicCon." For sexual harassment, that is. Rich Johnston of Bleeding Cool summarizes the problem and the would-be solutions. See also: "How to Report Sexual Harassment," by Elise Matthesen, and "The Missing Stair," by Cliff Pervocracy.

"Certainly there’s more of a collective understanding that something must be done. A feeling that there should be no tolerance amongst attendees for such behaviour, even if they aren’t individually targeted. And, as Billy Bragg once sang, there is power in a union. If you see something, make a stand and expect to be backed up by your peers. Because hey, this is Comic Con. What better place for people to team up to fight the bad guys?

"The Forgotten Blockbuster 'The Golden Child' Marks the Beginning of Eddie Murphy's 'Not Trying' Phase." At The Dissolve, Nathan Rabin inaugurates a new regular feature looking at hugely successful movies that seem to have left no impression on the culture as a whole. 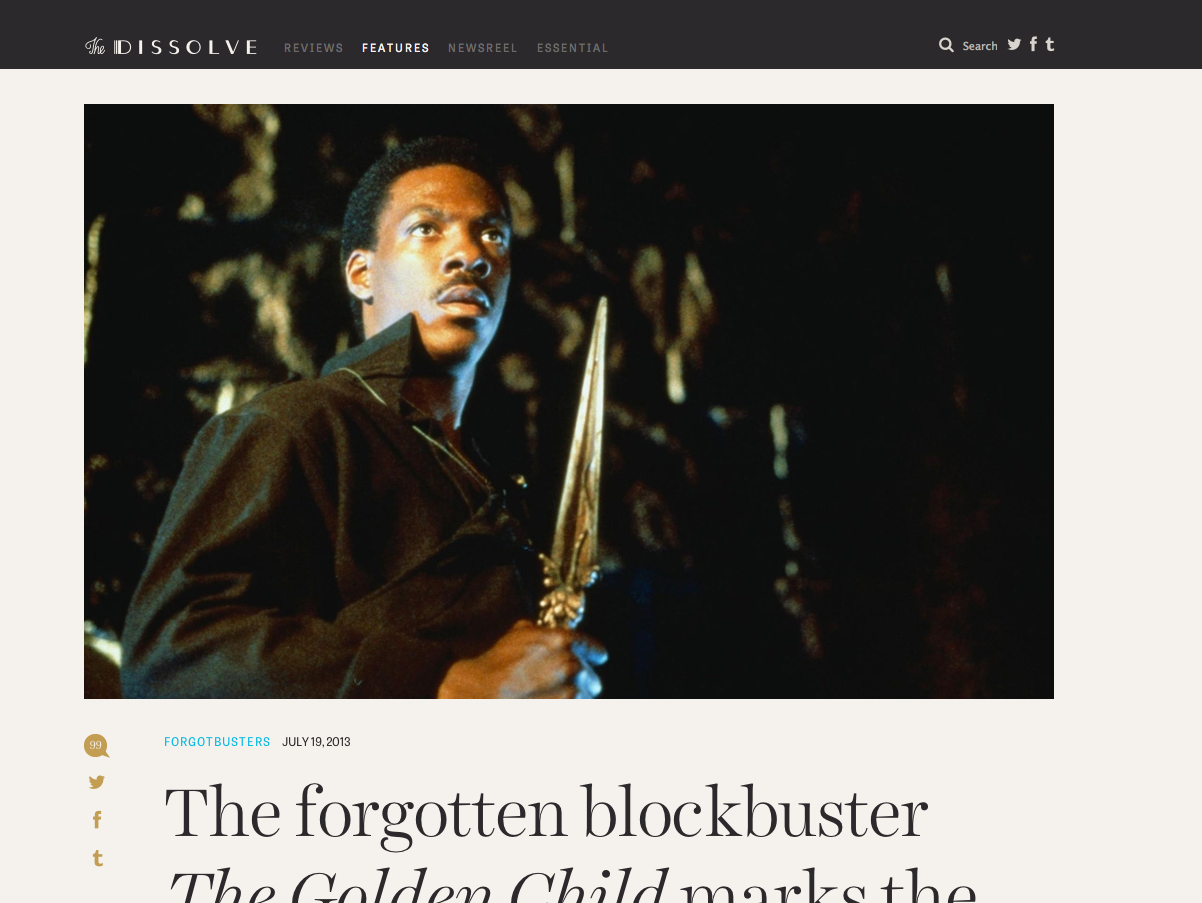 "Reduced to its bare outlines, The Golden Child in some ways resembles Ghostbusters, which came out just two years earlier: Take a popular Saturday Night Live alum (or alumni, in Ghostbusters’case); put him in a special-effects-heavy, kid-friendly fantastical adventure; then wait for the bucks to roll in. Murphy was even eyed for the role Ernie Hudson ended up playing in Ghostbusters, but at that point, Murphy was much too big to be playing “the black guy” in anyone else’s movie, even one as big as Ghostbusters. (His Beverly Hills Cop outgrossed Ghostbusters that same year.) Instead, Murphy played a role in The Golden Child originally intended for Mel Gibson. When Murphy took the part, the film was hastily converted from a relatively straight action-adventure epic to a comedy, though the film shifted genres in pre-production without becoming funny in the process." 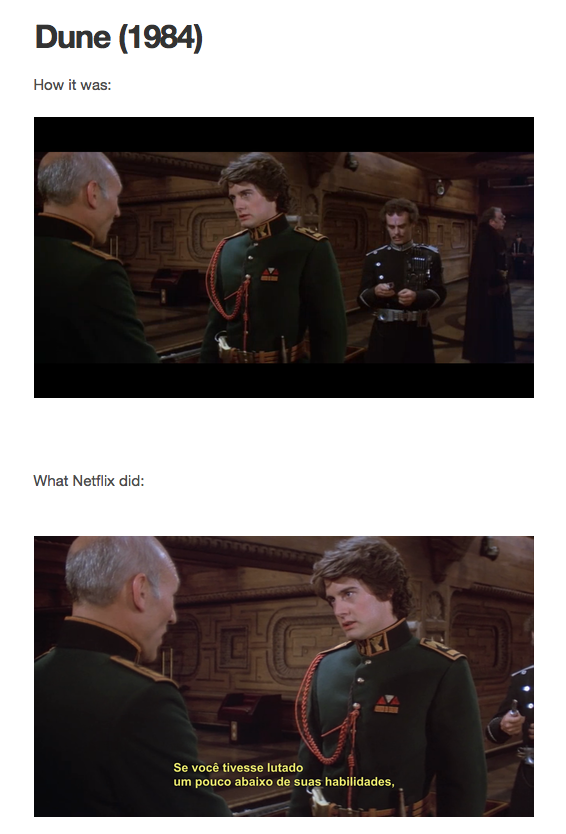 From the blog "What Netflix Does," which is dedicated to preserving evidence that Netflix crops a good many of its movies, sometimes awkwardly. For the corporate explanation of why this happens, read "Don't Crop Me, Bro! Netflix Says It Doesn't Crop Movies." By Tom Cheredar for VentureBeat.

Siskel and Ebert discuss the state of home video in 1988. Part 1 of 3 YouTube videos. This program includes a spirited defense of letterboxing, which was unpopular at the time.

Next Article: Thumbnails 7/22/13 Previous Article: They’re Not All Black and White – “Blackfish” Director Gabriela Cowperthwaite on the History of Misleading Portrayals of Killer Whales